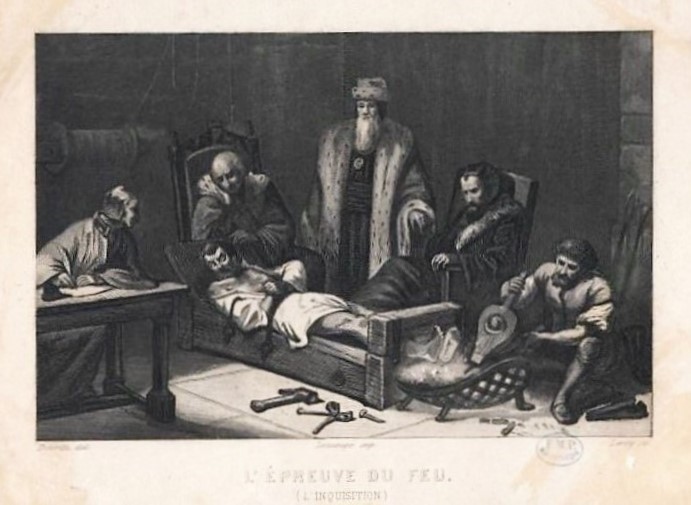 The original meaning of the noun ordeal, from Old English ordāl, ordēl, is: an ancient test of guilt or innocence by subjection of the accused to severe pain, survival of which was taken as divine proof of innocence. In Anglo-Saxon and Norman England, until its abolition in 1215, the ordeal could take any of four forms: fire, hot water, cold water and trial by combat.

Old English ordāl, ordēl, was a compound meaning literally that which is dealt out, from the prefix or-, meaning out, and dǣl, deal. Likewise, the English noun ort, denoting a fragment of food left over from a meal, is from an unattested Old-English compound orǣt, from the prefix or- and an element related to eat.

Of Germanic origin, ordeal is cognate with German Urteil and Dutch oordeel, which both mean judgement, verdict, sentence.

The following is from a code, known as Laws of Edward & Guthrum, compiled by Wulfstan (died 1023) after he became archbishop of York in 1002; its purpose was the proper observance of Sunday and feast-days by his northern subjects:

(* lahslit: the fine imposed for breach of Danish law)

During the Middle-English period (i.e. from about 1100 to about 1450), the word is restricted to Latin texts in forms such as ordalium and ordela, the only exception being the following occurrence in Troilus and Criseyde, by the English poet Geoffrey Chaucer (circa 1342-1400):

“But, for my deuoir and ȝoure hertes reste,
Wher so ȝow list, by ordal or by othe,
By sort, or in what wise so ȝow leste,
ffor loue of god lat preue it for the beste;
And if that I be giltif, do me deye.
Allas, what myght I more don or seye?”
translation:
“But now, to clear me and rest your heart, for the love of God let us test this suspicion, whether by ordeal or by oath, by casting of lots, or in whatever manner you wish! If I am guilty, let me be slain! Alas, what more can I do or say?”

It is therefore uncertain whether there is continuity between the Old-English period and the late 16th century, when began the modern use of ordeal in the sense of the ancient method of trial; the occurrence, in the late 16th century, of the forms ordale and ordele suggests re-borrowing, perhaps partly from post-classical Latin and partly as a learned adoption of the Old-English word.

The first of these modern uses is from A Perambulation of Kent, written in 1570 and published in London in 1576, by the English antiquary and lawyer William Lambarde (1536-1601):

(1826 reprint)
Cuthbert the Archbishop in his life begged of King Eadbert, that for the advauncement of Saint Iohns (a new church, that he had erected for that purpose, and for the execution of iudgments by the Ordale, and which was afterward fired with the flame of Christes church whereunto it was neere adioining) the Bishops also might from thencefoorth bee buried there.

The word has later been also applied to the analogous modes of determining innocence or guilt found in other societies. For example, the following is from A Manual of Botany (London, 1861), by the English botanist and pharmacognosist Robert Bentley (1821-93):

Erythrophlœum guineense, the Sassy Tree of Western Africa.—The bark, under the name of ‘ordeal bark’ or ‘doom bark,’ is used in certain parts of Africa as an ordeal, to which persons suspected of witchcraft, secret murder, &c., are subjected as a test of their innocence or guilt.

The sense of ordeal was gradually extended to anything which severely tests character or endurance. The following passage shows this transition; it is from the epistle to the reader, prefacing The Rustick Rampant, or Rural Anarchy (London, 1687), by the English poet John Cleveland (1613-58):

We know Crimes carried in a happy Stream of Luck, lose their Names in it, are Beautiful, and must be thought so: The Ordale of the Sword justified Caesar, and condemned Pompey, not his Cause.

I have found an early use of ordeal in its current sense of severe or trying experience in The Ipswich Journal (Suffolk) of 22nd October 1748:

Last Friday, Mr. Henry Hail, a Dealer in Cyder, in Great St. Helen’s, and Mr. Tuff, a Grocer, near Sun Yard in Bishopsgate Street, having been irregularly nominated by the Steward and Renter of St. Bartholomew’s Hospital, contrary to an Order of the Court of Bridewell, the Court of the latter did not accept the Nominations; but order’d Staves to be sent from them to those two very worthy Persons, an Honour but rarely done to Persons of the first Distinction, Dukes, Earls, &c. and Chiefs of the Law, who have submitted to the Ordeal of a Committee; but as it was suggested they were Persons of very great Fortune, and Well-Wishers to the Hospital, it is not doubted but they will answer all the Ends proposed.

The only significations of the French feminine noun ordalie, from Medieval Latin ordalium, are the ancient method of trial in which the accused was exposed to physical dangers and the similar modes of determining innocence or guilt found in other societies. The French word is first recorded in Menagiana sive excerpta ex ore Ægidii Menagii (Menagiana, or excerpts from the mouth of Gilles Ménage – Paris, 1693), a collection, by several of his friends, of the witticisms, thoughts and observations uttered by the French scholar Gilles Ménage (1613-92).