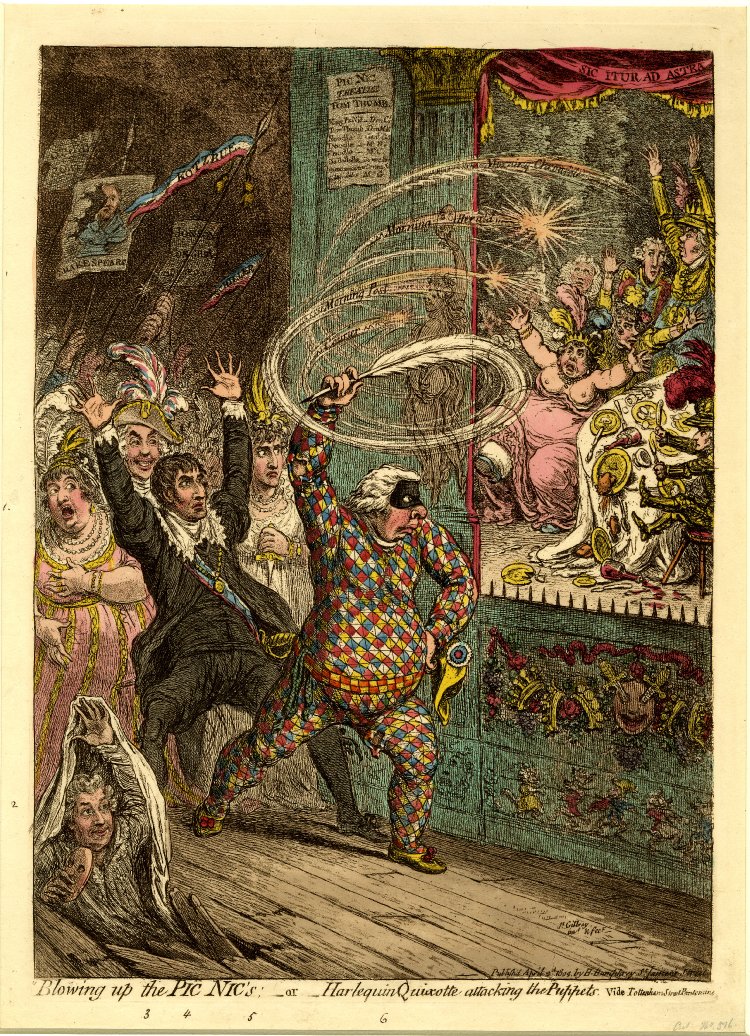 The French word is first recorded in an anonymous pamphlet written in Paris on 16th May 1649, titled Les charmans effects des barricades, ou l’amitié durable de la Compagnie des freres Bachiques de Pique-nique. En vers burlesque (The charming effects of barricades, or the lasting friendship of the Company of the Bacchic brothers of Pique-nique. In burlesque verse). This pamphlet celebrates the end of the first Fronde, an insurrection against Mazarin and the court during the minority of Louis XIV, which was a period a food scarcity in Paris under siege. The statutes of the “Compagnie de Pique-nique” stipulate that in the new era of perpetual revels and carefreeness, the “freres Pique-niques” shall each contribute a share of the food and drink and shall never mention politics. A fictional “Pique-nique, great drinker, was the first institutor” (“Pique-nique grand beuuer, fut le premier instituteur”) of this Company.

The word was first defined by Gilles Ménage (1613-92) in Dictionnaire étymologique, ou origines de la langue françoise (1694) — curiously, this etymological dictionary does not give the origin of the term:

Piquenique. Nous disons ‘faire un repas à piquenique’, pour dire faire un repas où chacun paye son écot : ce que les Flamans disent, ‘parte bétal’, ‘chacun sa part’. Ce mot n’est pas ancien dans notre Langue : & il est inconnu dans la pluspart de nos provinces.
translation:
Piquenique. We say ‘to have a meal at piquenique’, to say to have a meal at which each person pays their share; what the Flemish say, ‘parte bétal’, ‘each their share’. This word is not old in our language; and it is unknown in most of our provinces.

Both this definition and the first attestation indicate that this dining custom originated in Paris. But, in Dictionnaire critique de la langue française (1788), Jean-François Féraud (1725-1807) writes that pique-nique is used everywhere (“usité par-tout”). Beside the earlier repas à pique-nique, he records un pique-nique, a picnic, and the expression faire un pique-nique, to have a picnic. He also mentions the form pic-nic (probably after English) and la loi de pic-nic, the picnic law, according to which each person pays their share.

This implies that the French word did not specifically denote a meal eaten outdoors, as it now does after the recent English usage. In the 8th edition of the Dictionnaire de l’Académie française (1932-35), pique-nique was still defined as meaning a meal at which each person pays their share or at which each person contributes a share of the food. In Dictionnaire de la langue française (1872-77), Émile Littré (1801-81) specifies that a pique-nique is an indoor meal. He also writes that the French word ought to be spelt pikenike, as he believes it is from English pick nick, composed of to pick, meaning to seize, take, and nick, “point, instant”.

The first instances of picnic in English refer to German and French social features, but the authors either do not specify what they consisted in or do not explain why they were given the name picnic.

The earliest instance is found in a letter dated 29th October 1748 written by Philip Dormer Stanhope (1694-1773), 4th Earl of Chesterfield, to his son, Philip, who sojourned in Germany (his son’s letter is apparently lost):

I like the description of your ‘Pic-nic’; where, I take it for granted, that your cards are only to break the formality of a circle, and your ‘Symposion’ intended more to promote conversation than drinking. Such an ‘amicable collision’ as Lord Shaftesbury very prettily calls it, rubs off and smooths those rough corners, which mere nature has given to the smoothest of us.

I was last night at a Subscription Ball which is called here Picquenic; I danced two dances with Prince Charles, stay’d supper & some time after, yet was in Bed at a very little after twelve.

In her autobiography, Ellis Cornelia Knight (1757-1837) wrote that she attended a picnic at Toulon, France, in February 1777:

We stayed here till the 17th, and on the previous day went to a “pique-nique” at a little country-house not far from the town. We were about ﬁfty in number, of whom ﬁfteen were ladies. We dined early, and afterwards danced. Most of the company were of the ﬁrst families of Provence, all good humoured and well bred. Their dancing was excellent, and their cheerfulness unwearied.

In Britain as in France and Germany, picnics originally took place indoors. In The Picnic: A History (2014), Walter Levy explains how the English word gained currency in the sense of indoor meal by contribution of the guests:

During a hiatus during Britain’s war with France in 1802, a group of over two hundred aristocrats formed the Pic Nic Society. Their name Anglicized ‘pique-nique,’ and their intent was to produce theatrical entertainments followed by lavish dinners and then gambling. William Combe, editor of the ‘Pic Nic’ journal, explained, for those not in the know, that ‘pic nic’ signified “a “repast supplied by contribution,” but he is skittish and barely mentioned its French roots. Ironically, it was not the French context that ruined the Pic Nics but the greed of William Brinsley Sheridan, who operated a professional theater at Drury Lane and feared a loss of income. As the Pic Nic spat tumbled into the local newspapers, Londoners eager for scandal rejoiced when caricaturists, especially James Gillray, savaged everybody involved. The most enduring is Gillray’s “Blowing up the Pic Nic’s:—or—Harlequin Quixotte attacking the Puppets. Vide Tottenham Street Pantomime (April 2, 1802),” which is particularly mean to Sheridan and Lady Albina Buckinghamshire. He is in a torn harlequin suit, and she is bare breasted. The Pic Nic caricature was aimed at personalities and not at a picnic dinner. However, its notoriety worked a linguistic charm for ‘picnic,’ by which you might laugh at excesses of gluttony. In a flash, Gillray lifted ‘picnic’ from obscurity into the light of English parlance. Even if people had never before heard of a picnic or dined at a picnic, they could still snicker at the outlandish behavior of aristocrats. Even sixteen years later John Keats used ‘pic nic’ in a letter to George and Georgiana Keats (1818): “Perhaps as you were fond of giving me sketches of character you may like a little pic nic of scandal even across the Atlantic.”

The first to call an outdoor party a picnic was apparently the unknown author of The Happy Courtship, Merry Marriage, and Pic Nic Dinner, of Cock Robin, and Jenny Wren (1806).

Similar in form and sense to picnic, knick-knack, also nick-nack, was formed with reduplication from knack, a noun probably of imitative origin which originally meant a clever or deceitful trick. This was also the original signification of the reduplicated form, but in The Nabob (1773), the British actor and playwright Samuel Foote (1720-77) used nick-nack in the sense of a social meal to which each guest contributes in kind:

– Conserve: Betsy Robins has a rout and supper on Sunday next.
– Janus: Constant still, Mr. Conserve, I see. I am afraid I can’t come to cards; but shall be sure to attend the repast. A nick-nack, I suppose?
– Conserve: Yes, yes; we all contribute, as usual: The substantials from Alderman Sirloin’s; Lord Frippery’s cook finds fricasees and ragouts; Sir Robert Bumper’s butler is to send in the wine; and I shall supply the desert [sic].
– Janus: There are a brace of birds and a hare, that I cribbed this morning out of a basket of game.
– Conserve: They will be welcome.