from ‘the history of the four kings’, punning on ‘the four kings’ (the four playing cards in a pack, each bearing a representation of a king) and ‘the Book of Kings’ (the name of two, formerly four, books of the Old Testament)

from the image of an impossible task, ‘to set the Thames on fire’: to work wonders — typically used negatively in the ironic sense never to distinguish oneself

The proverb you can’t make a silk purse out of a sow’s ear means you can’t create a fine product from inferior materials. It originated in Scotland, according to its first recorded instance, in A New Dictionary of the Terms Ancient and Modern of the Canting Crew (1699), by “B. E. Gent.”: Luggs, Ears: Hence […]

MEANING   a place or state of utter confusion and uproar   ORIGIN   In Paradise Lost (1667), the English poet John Milton (1608-74) invented Pandæmonium, with a capital P, as the name for the capital of Hell, containing the council chamber of the Evil Spirits. This noun is from ancient Greek παν- (= pan-), […] 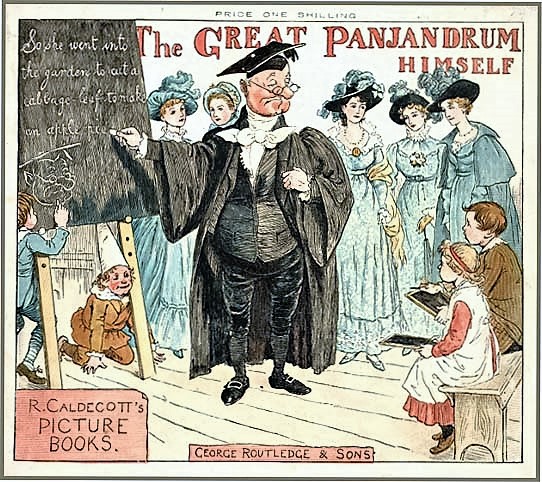 cover of The Great Panjandrum Himself (1885), a picture book based on the text attributed to Samuel Foote, by the English artist and illustrator Randolph Caldecott (1846-86) – photograph: Aleph-Bet Books     MEANING   a pompous self-important official or person of rank   ORIGIN The word is supposed to have been coined in […]

Blowing up the PIC NIC’s:—or—Harlequin Quixotte attacking the Puppets. Vide Tottenham Street Pantomime (1802), by James Gillray (1756-1815) — image: The British Museum     MEANING   a meal eaten outdoors   ORIGIN   This word is from French pique-nique, probably formed with reduplication from the verb piquer, to pick. (Similarly, pêle-mêle, the origin […]