In British English, the mistaken use of an apostrophe, especially its insertion before the final s of an ordinary plural form, is often called greengrocer’s apostrophe, or greengrocers’ apostrophe.

This term alludes to the fact that greengrocers were regarded as being particularly prone to this error when advertising their produce for sale; in English our English (and how to sing it) (London, 1991), the British novelist and newspaper columnist Keith Spencer Waterhouse (1929-2009) remarked:

Greengrocers, for some reason, are extremely generous with their apostrophes—banana’s, tomatoe’s (or tom’s), orange’s, etc. Perhaps these come over in crates of fruit, like exotic spiders.

It is interesting that Waterhouse compared these apostrophes to spiders, because Ian Mayes, the first reader’s editor of The Guardian (London), coined the word apostrofly in It’s in its rightful place: The readers’ editor on… the plague of the apostrofly, published on Monday 30th September 2002; he explained:

Few things seem to provide readers of the Guardian with more amusement and irritation than the misplaced apostrophe […].
The apostrophe, it sometimes seems, is like an insect – an apostrofly – over the dining table, alighting where it will.

a correct—and colourful—use of the apostrophe in Lancashire

Claire Taylor, the owner of this shop in Lancashire, puns on tailor made 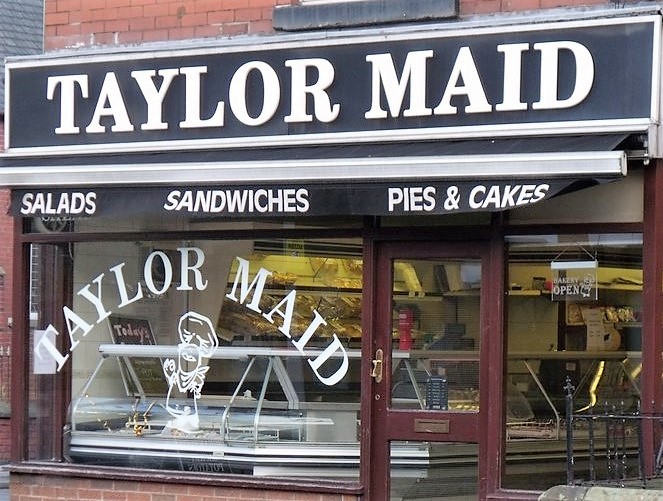 the owner of this chippy puns on Market Place, where the shop is situated in Chorley, Lancashire