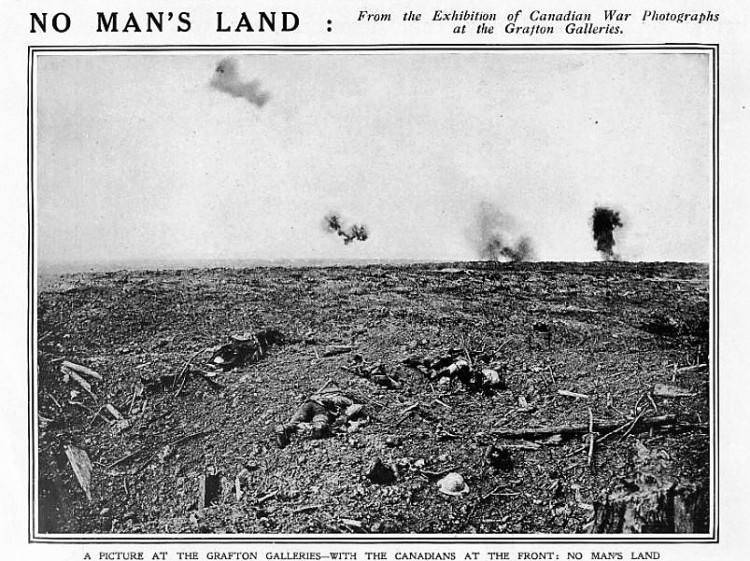 NO MAN’S LAND: From the Exhibition of Canadian War Photographs at the Grafton Galleries

The earlier form of no man’s land was none man’s land and both originally denoted a piece of unowned land or wasteland. The term none man’s land appeared as early as 1086 in the Domesday Book, the comprehensive record of the extent, value, ownership and liabilities of land in England, made by order of William the Conqueror (circa 1027-1087). The noun no man’s land is first recorded in the first half of the 14th century.

association with a first type of death

In early use, either term was especially employed as a place name, often referring to a place on a boundary or between boundaries, and specifically to a plot of ground outside the north wall of London, formerly used as a place of execution. For example, Annales Paulini de tempore Edwardi Secundi, a chronicle probably written by a monk at St. Paul’s in London under the reign of Edward II (1284-1327), reported that on 23rd January 1321 the lady Juliana, wife of Sir Thomas Mordach, against whom she conspired,

The first recorded use of no man’s land also refers to this place of execution. Croniques de London, a chronicle of London written in Anglo-Norman French, reported that on 19th November 1326:

association with a second type of death

In 1348, the Black Death, the great epidemic of a disease thought to be bubonic plague, reached England, killing between one third and one half of the population in a matter of months. In A suruay of London Contayning the originall, antiquity, increase, moderne estate, and description of that citie, written in the yeare 1598 (London, 1598), the English historian and antiquarian John Stow (circa 1525-1605) wrote of a mass burial ground called No Man’s Land:

A great Pestilence entring this Iland, began first in Dorset shire, then proceeded into Deuonshire, Somerset shire, Glocester shire, and Oxforde shire, and at length came to London, and ouerspread all England, so wasting the people, that scarse the tenth person of all sortes was left aliue, and Churchyards were not sufficient to receiue the dead but men were forced to chuse out certain fieldes for burials, whereupon Ralph Stratforde Bishop of London, in the yeare 1348. bought a peece of ground called no mans land, which he inclosed with a wall of Bricke and dedicated for buriall of the deade […].
After this in the yeare 1349. the saide Sir Walter Many in respect of danger that might befall in this time of so great a plague and infection, purchased thirteene acres and a rode of ground adioyning to the said no mans land, and lying in a place called Spittle Crost, because it belonged to S. Bartilmewes Hospitall, since that called the New Church Haw, and caused it to be consecrated by the saide Bishop of London, to the vse of Burialles.
In this plot of ground there was in that yeare more then 50000. persons buried, as I haue reade in the Charters of Edwarde the thirde.

association with a third type of death

By the second half of the 19th century, no man’s land had already taken its modern sense of zone between opposing forces. This is first recorded in the address that the Scottish geologist Roderick Impey Murchison (1792-1871) delivered at the Royal Geographical Society on 23rd May 1864; in order to put a stop, “between Khartûm, the present southern boundary of Egypt, and Gondokoro”, to “the conduct of the traders in ivory, who, arming one set of villagers against another, are said to plunder tribes, and carry away the women and children as slaves”, Murchison advocated the following:

We believe that this can be best accomplished by the exertions of the Pasha of Egypt, and by the extension of his influence southwards from Khartûm to Gondokoro: The intermediate country is a sort of No-man’s-land, in which numerous warring small tribes are kept in an excited and barbarous state by an extensive importation of firearms.

As a military term, no man’s land was made famous during the First World War as the name of the unoccupied and dangerous terrain between two opposing trench systems.

In A Concise Dictionary of Phrase and Fable (1993), B. A. Phythian concludes:

It is curious that an expression merely signifying lack of ownership should have been closely associated with three different types of death over almost seven centuries.

Since the 19th century, no man’s land has also been used in the sense of an imaginary, indefinite or ambiguous place or state. For example, the English poet and humourist Thomas Hood (1799-1845) wrote in Love and Lunacy (1836):

And doubling to a fist each ample hand,
The empty air he boxed with, a-la-Bitton,
As if in training for a fight, long plann’d
With Nobody—for love—at No Man’s Land!