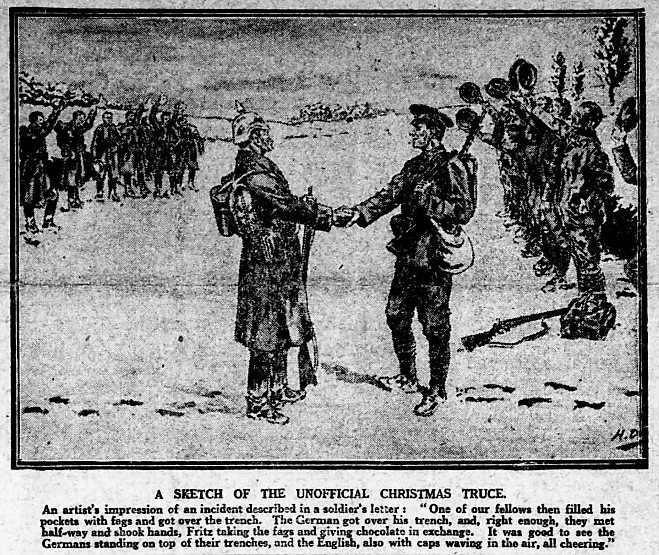 A SKETCH OF THE UNOFFICIAL CHRISTMAS TRUCE.

An artist’s impression of an incident described in a soldier’s letter: “One of our fellows then filled his pockets with fags and got over the trench. The German got over his trench, and right enough, they met half-way and shook hands, Fritz taking the fags and giving chocolate in exchange. It was good to see the Germans standing on top of their trenches, and the English, also with caps waving in the air, all cheering.”

from the Nottingham Evening Post (Nottinghamshire) of Saturday 2nd January 1915

It had been said that the war that began in the summer of 1914 between the Central Powers and the Triple Entente would be “over by Christmas”, but it was clear in December that this would not be the case. This left many unexpectedly celebrating Christmas without their family. Over the Christmas of 1914, a series of unofficial ceasefires took place along the Western Front. In January 1915, many British newspapers published letters from soldiers telling of what has come to be known as the Christmas Truce of 1914. For instance, the following, from The Yorkshire Post of Monday 4th January 1915, shows that the primary aim of these ceasefires could be the burial of the dead soldiers lying on no man’s-land:

FRIENDS FOR A DAY.
THE SOLDIERS’ CHRISTMAS TRUCE.

Further accounts of the informal truce on Christmas Day are told in letters received from the front. The “Daily Telegraph” quotes the following extracts from the letter of the Colonel of an infantry regiment to his wife:—
This morning (Christmas Day) I went up to the trenches and wished every man a happy Christmas, and went all round them. As I was coming away at noon there was a sudden hurrah and rush, and our men and the Germans both started running to one another, and met half-way and shook hands. I did not like it at first, and ordered my men back, but was told they wanted a truce for the day to bury their dead, so I agreed to that. After ordering half the men to keep a smart look-out in the trenches with their rifles ready, I went forward and joined the crowd. I met a Saxon, who talked English well, and who interpreted for me while I held a court of admiring men and N.C.O.’s [= non-commissioned officers]!
For an hour I stood there; afterwards their captain and two subalterns came up, but I had left, and did not see them. I said if they would have an armistice on New Year Day we would play them at football between our lines—so that remains to be seen.
A lot of their dead were lying about in front of our trenches, which they thanked us for allowing them to bury. All the German dead were collected and buried, and their captain read a burial service over them in German and in English, as many of our men were looking on. At two p.m. he blew a whistle, and all the Germans bolted back to their trenches.
In the afternoon, at three p.m., our doctor thought he would go and see the Germans, so boldly walked down the road to their trenches and talked to them. They were very full of the football idea of mine on New Year Day. I said if they would like another armistice then I would turn out a team and play them among the shell-holes, and they were quite keen. Happily, there won’t be any obstacles like dead Germans lying about unless they try on another attack before then. I wonder if it will come off.
These Saxons are the same crowd we have always had opposite to us, and most of them are quite young, 18 to 25. Their trenches that our men went into were up to the knee in water, so they are far worse off than our men are.
An officer of the North Staffordshire Regiment, whose letter appears in “The Times,” explains how the understanding began on Christmas Eve, and adds:—
This morning after réveillé the Germans sent out parties to bury their dead. Our men went out to help, and then we all both sides met in the middle and in groups began to talk and exchange gifts of tobacco, food, etc. All the morning we have been fraternising, singing songs. I have been within a yard, in fact, on to their trenches, and have spoken to and exchanged greetings with a colonel, staff officers, and various company officers. All were very nice, and we fixed up that the men should not go near their opponents’ trenches, but remain about midway between the lines. The whole thing is extraordinary. The men were all so natural and friendly. Several photos were taken, a group of German officers, a German officer and myself, and a group of British and German soldiers. The Germans are Saxons, a good-looking lot, only wishing for peace, in a manly way, and they seem in no way at their last gasp. I was astonished at the easy way in which our men and theirs got on with each other. We have just knocked off for dinner, and have arranged to meet again afterwards until dusk, when we go in again and have songs until 9 p.m., when “war” begins again. I wonder who will start the shooting. They say “fire in the air and we will,” and such things, but, of course, it will start, and tomorrow we shall be at it hard, killing one another.

The Diss Express (Norfolk) of Friday 15th January 1915 quoted the translation made by the Rotterdam correspondent for the Telegraph of a German newspaper, the Vorwärts, which had published a letter from a German soldier describing the ceasefire on Christmas Eve and Christmas Day:

The writer says: “Suddenly from the enemy hurrahing was heard, and, surprised, we came from our mouseholes and saw the English advancing towards us, waving white cigarette boxes, handkerchiefs, and towels. They had no rifles with them, and therefore we knew it could only be a greeting and that it was all right. We advanced towards them about half-way. We were only about 200 metres from each other. The greeting took place in the presence of officers from both sides. Cigarettes, cigars, and many other things were exchanged, and even snapshots of both sides were taken.
“The English began playing with a football they had with them. On darkness descending both sides returned to their drawing-rooms, having promised that for the next three days of the “holidays” they would not fire on each other. This promise was given as a word of honour, and extended on both sides to the artillery as well as the cavalry and infantry. The French lay a little further away, and therefore did not take part in this. They were under fire the whole of the day by our artillery. We were able to move about the whole of Christmas Day with absolute freedom. It was a day of peace in war. It is only a pity that it was not a decisive peace.”

I have found no eyewitness account of football games played between soldiers from the opposing armies. In a letter to his wife, published in The Falkirk Herald and Scottish Midlands Journal of Saturday 16th January 1915, Colonel Patrick Dea, of the 2nd Battalion of the Argyll and Sutherland Highlanders, describing the Christmas truce, wrote:

It is said that some of our boys had a four-a-side with them [= the Germans], but I didn’t see it.

Those fraternisations did not occur everywhere. For example, The Walsall Advertiser (West Midlands) of Saturday 23rd January 1915 published this:

A letter, dated January 11th (two days before he was shot) was received by relatives on Sunday morning last, and in this, Corporal Maddocks says as far as he was concerned there was no Christmas truce.
“Things out here,” he said, “appear to be very quiet, but the other night the Germans sang ‘God save the King’ to us in English and then gave three cheers. Then we had a smart set-to for about ten minutes. I can’t make myself believe what I read in the papers about the unofficial Christmas truce, for in our trench, if a German popped his head up he was well for it, and so were we. And as regards playing football between the lines, well, if I had the fellow here I could just about tell him off in fine style and language. He must have had a nightmare, or wants showing up.”

And the Sunderland Daily Echo and Shipping Gazette (Northumberland) of Friday 8th January 1915 had the following about the operations in the valley of the Aisne:

NO CHRISTMAS TRUCE THERE.

On Christmas Day the Germans left their trenches shouting “Two days’ truce!” Their ruse did not succeed. All were shot down.