Of American-English origin, the phrase to pull the wool over someone’s eyes means to deceive someone by telling untruths.

The earliest instance that I have found is from The People’s Press (Gettysburg, Pennsylvania) of Friday 20th November 1835:

R. C. Harrison, of Frankfort. Ky. was appointed on a committee to glorify Col Johnson as the “hero of the Thames,” but he publicly declined the honor; and though a Jackson man, stated that he would not make himself a party to the flagrant injustice of robbing Gen Harrison of his fame to bestow it upon a subaltern who perhaps had never seen a battle before. His letter of declination is a long one, and he discourseth to the ‘getters up’ of the humbug ‘like a book’—We are glad to find among the leading Van-ites, at least one man, whose conscience will not permit him to ‘go the whole hog’ in pulling the wool over the people’s eyes.

The second-earliest instance that I have found, from The Burlington Free Press (Burlington, Vermont) of Friday 8th July 1836, might provide a clue as to the origin of the phrase (the persons referred to were Martin Van Buren (1782-1862), President of the United States from 1837 to 1841, and Richard Mentor Johnson (1780-1850), his Vice President):

The Van Buren and Johnson State Convention met on Thursday last according to notice. The drilling and drumming of the leaders for months past, brought together, as usual, a large number of the pensioned patriots of the State, including collectors, postmasters, &c. to the number of about 500. The very elite of the masonic, office-holding aristocracy of the state was congregated.
[…]
The committee on the State Ticket reported the names of
William C. Bradley, for Governor,
John S. Pettibone, for Lieutenant Governor,
Charles R. Cleaves, for Treasurer.
On motion of Mr. Dillingham, the names were proposed to the convention separately.
[…]
On the question being stated, Will the convention nominate John S. Pettibone for Lieutenant Governor? […]
The gentleman from Lowell again took the floor, and by way of placing Pettibone’s democracy beyond doubt or cavil, triumphantly referred to his battle with Essex Bank. True, he had strayed away among the Antimasons, but it was only to bring a dozen sheep with him to the democratic fold. [By the way, we suspect the nominee has had better success in catching sheep than he has in “pulling wool” over the eyes of the Antimasons.] 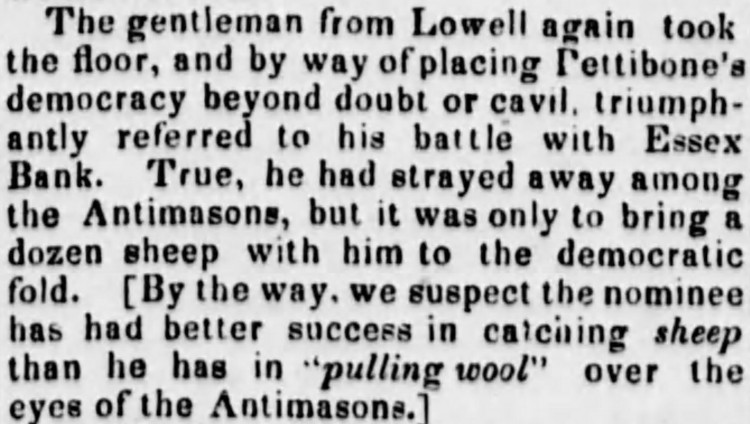 In the last paragraph, both — and only — sheep and pulling wool are in italics, which indicates that the author establishes a relation between them. It is possible that this is merely a punning relation, but it is also possible that the phrase originated in sheep farming; the following letter, published in the Poughkeepsie Journal (Poughkeepsie, New York) of 23rd May 1838, is perhaps an indication that sheep rearing is the origin of to pull the wool over someone’s eyes, the meaning of which can be formulated as to make someone blind to facts:

WOOL OVER THE EYES.
Mr. Tucker—Since I have commenced giving an account of my experience and observations relative to wool growing, I thought it might be well to mention one other obstruction that impedes the comfort and takes the lives of sheep. Although I see there are many close observers that write for the Farmer, they have as yet neglected to urge the necessity of examining the eyes of sheep. I have frequently discovered sheep with their eyes shut, or mostly so. On examination, I find the hair that grows about the eyes, to be turned into the eye. Lambs in the winter, before they are a year old, are the most troubled; those that have the most wool about the head are the most liable. I have yearly to shear the faces of fifty to seventy that get into that situation, and open their eyes and cut out the hair. Some sheep become perfectly blind, dwindle and fail. There are many instances among old sheep of high blood. It requires the greatest care to open the eye, and with a sharp shears cut the hair close. This is not only the case with my sheep, but I have frequently passed the flocks of others that were tormented in the same way.
John Spicer.
East Barrington, Yates Co. March 10, 1838. 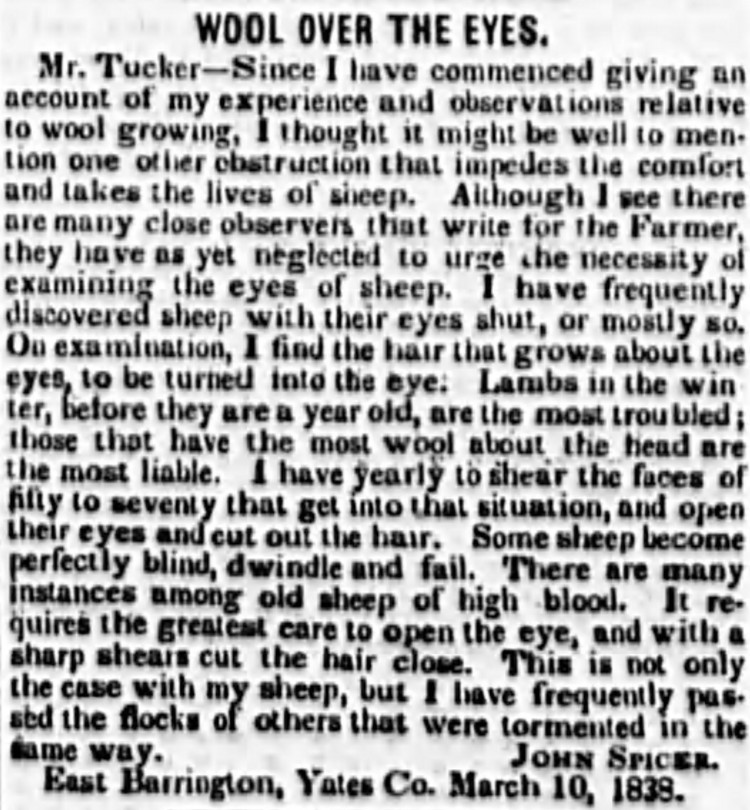