From Gavroche, the name of a street urchin in Les Misérables (1862), a novel by the French poet, novelist and playwright Victor Hugo (1802-1885), the common noun gavroche designates—in both English and French—a street urchin, especially in Paris, France. 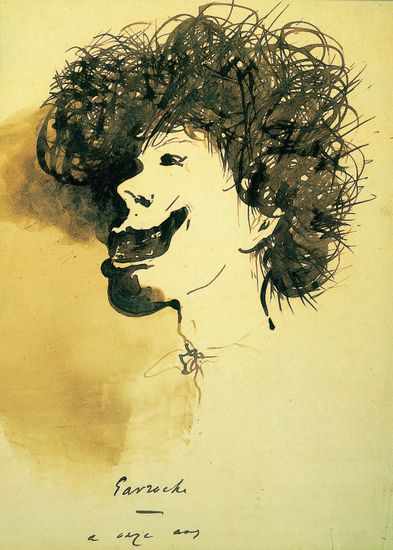 The masculine noun voyou was derived from the feminine noun voie, denoting a way (i.e., a road, a street, etc.); in the same dictionary, Alfred Delvau gave the following definition of voyou:

1 Quasimodo is the name of the hunchback in the novel Notre-Dame de Paris (The Hunchback of Notre-Dame – 1831), by Victor Hugo; in the novel, the Archdeacon Claude Frollo named the hunchbacked child abandoned in the cathedral after the day he found him, Quasimodo Sunday.
2 Domitian (Titus Flavius Domitianus – 51-96) was the Roman emperor from 81 to 96.
3 Voltaire (François-Marie Arouet – 1694-1778) was a French philosopher, poet, playwright, historian and polemicist, famous for his wit.
4 Diogenes (circa 400-circa 325 BC) was a Greek Cynic philosopher.
5 Jean Bart (1650-1702) was a French privateer and naval officer.
6 Jérôme Lalande (1732-1807) was a French astronomer; he was an atheist, and contributed to the Dictionnaire des Athées anciens et modernes (Paris: Grabit, 1800), by Sylvain Maréchal (1750-1803).

The following interesting—but perhaps apocryphal—story was published in The Brooklyn Daily Union (Brooklyn, New York, USA) of Thursday 11th May 1865:

Le Petit Gavroche.—Recently an elderly but well-preserved gentleman, while walking on the Place de l’Hotel de Ville, Brussels, was struck by the sign over a tobacco shop, “Au Petit Gavroche.” Looking first on the sign and then at the number of the house, he said to the friend who was with him: “I really don’t understand that. It certainly was here!” He entered, and, speaking to an elderly lady, said: “I beg your pardon, madam, but please tell me have you tenanted this house long?” “No, sir; I have been here only two years.” “May I ask you, without being over-inquisitive, why you took that sign? Do you know M. Victor Hugo?” “I do not, but I know little Gavroche, for I have read ‘Les Miserables.’” “Did you like the book?” “Indeed I did, for I too belong to this people. I have seen barricades, and I have been in prison for political opinion’s sake.” She went on giving an ardent Red Republican creed for her own. When she ended, he held out his hand to her, saying: “Madam, allow me to shake hands with you as a friend. I am the father of little Gavroche.” It was Victor Hugo. His astonishment on seeing his little hero’s name on a sign was doubled by its hanging on the house in which he commenced writing “Les Miserables.”

The earliest occurrence that I have found of gavroche used in English as a common noun is from an article titled The Michigan Drummer Boy 7, published in The Daily Bee (Sacramento, California, USA) of Wednesday 11th February 1863:

Almost everybody has heard of the Michigan drummer boy, an American Gavroche, who crossed the Rappahannock at Fredericksburg along with the “forlorn hope” of the 7th regiment from that State.

7 Robert Henry Hendershot, known as the Drummer Boy of the Rappahannock, was a drummer boy in the Union Army during the American Civil War (1861-65); he became known for his reputed heroics at the Battle of Fredericksburg, Virginia, in December 1862.

The second-earliest occurrence that I have found of gavroche used in English as a common noun is from a correspondence from Paris, published in The Daily Picayune (New Orleans, Louisiana, USA) of Sunday 20th May 1866:

The Géita [misprint for ‘Gaité’] is playing “Bas de Cuir,” “founded on Cooper’s Leathering Stockings Tales” 8—the foundation is completely out of sight. In the course of the play Niagara Falls, on the Hudson River are shown—a beautiful scenic effect—and Leather Stocking rides on a learned horse. The first night it was played the Chief of the Huron Indians, Cock’scomb (?) told a pretty white girl, his prisoner, he required two wives in his wigham (wigwam.) A Gavroche in the fifth tier cried out: “You’re mistaken, old boy, you mean bigame!”

An early British-English use of the common noun gavroche occurs in a correspondence from Paris, published in The Daily Telegraph (London, England) of Wednesday 31st August 1870:

The law is that every woman frequenting a place of public resort alone, and who is unable to “justify her means of existence,” is amenable to arrest and to six months’ imprisonment at St. Lazare 9; but it is not apparently to that well-known correctional establishment, which, so it is reported, is already full to overflowing, that these unwilling Magdalens have been conveyed. They have been taken somewhere “out of town,” and no less than twelve of those huge yellow and green omnibuses, called paniers-à-salade 10, passed yesterday along the Rue Lafayette on their way to the villeggiatura provided by authority for the reception of the lady Bohemians. As the procession of omnibuses passed, a philosophic gavroche remarked pithily to another young blackguard, his companion, “V’là I’amour!” 11

9 Saint-Lazare, in Paris, was a prison for women, particularly prostitutes.
10 The French noun panier à salade, which denotes a salad spinner, is an informal appellation for a police vehicle for transporting prisoners.
11 V’là l’amour! translates as There’s love! (v’là is the contracted form of voilà).