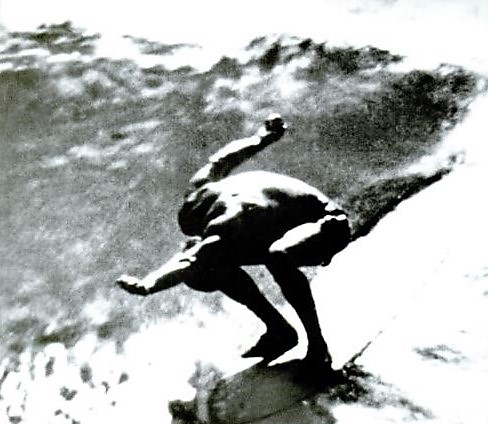 Mickey Muñoz at Secos break, pulling a move known as the “Quasimodo.”

from Surfing USA! An Illustrated History of the Coolest Sport of All Time (Voyageur Press – 2005), by Ben Marcus

The noun Quasimodo, in full Quasimodo Sunday, designates the Sunday following Easter Sunday. Via French, it is from post-classical Latin quasimodo, of same meaning.

The origin of the term is quasi modo (from classical Latin quasi, meaning as if, and modō, in manner), in the phrase quasi modo geniti infantes, as if newborn babies, the first words of the antiphon of the Latin introit of the Mass for this day. In the Vetus Latina (Old Latin – the collective name given to the biblical texts in Latin that existed before the late 4th-century Vulgate), the First Epistle of Peter, 2:2, is:

In the New International Version (2011), this verse is:

Like newborn babies, crave pure spiritual milk, so that by it you may grow up in your salvation.

In the Vulgate, it is:

In German, the Sunday following Easter Sunday is called Quasimodogeniti.

Quasimodo Sunday is also called Low Sunday, probably with allusion to the resumption of ordinary church services on this day after the celebration of Easter. The Annotated Book of Common Prayer (London, 1866), edited by the Reverend John Henry Blunt (1823-84), explains:

The popular name of Low Sunday has probably arisen from the contrast between the joys of Easter and the first return to ordinary Sunday services.

The name Low Sunday perhaps also alludes to the fact that, as the Octave Day of Easter, this Sunday is considered part of the feast, though in a lower degree than Easter Sunday.

Until 1969, in Latin, Low Sunday was called Dominica in albis depositis, Sunday with white robes put aside, with reference to the custom that the neophytes who had been baptised at Easter put their white baptismal robes aside on this day. Since 1969, the official name of the feast in the Roman Catholic Church has been Dominica secunda infra octavam Paschae, Second Sunday within the Octave of Easter.

In the novel Notre-Dame de Paris (The Hunchback of Notre-Dame – 1831), by the French poet, novelist and playwright Victor Hugo (1802-85), the Archdeacon Claude Frollo named the hunchbacked child abandoned in the cathedral after the day he found him, Quasimodo Sunday.

This position was invented in 1959 by the American pioneer of surfing Mickey Muñoz (born 1937), nicknamed The Mongoose.