The American-English phrase to go to, or to attend, Lilywhite’s, or Lily White’s, party means, of a child, to go to bed—British-English synonym: up the wooden hill to Bedfordshire.

In this phrase, Lilywhite refers, of course, to the whiteness of the bedsheets. It is a noun use of the adjective lily-white, meaning white as a lily, hence also of a pure white, ideally white.

It is my hope for every child to have the opportunity to reach into their imagination at bedtime and know that sleep is neither lonely nor scary, but can be a magical party full of what dreams should be made of. Every boy and every girl can have the opportunity to attend “Lily White’s Party” each night, and is invited back to do it again for all the nights that follow!

This is an illustration from Christine Suhré’s book, as published in the Poughkeepsie Journal (Poughkeepsie, New York) of Friday 17th February 2017—also visit lilywhites.party: 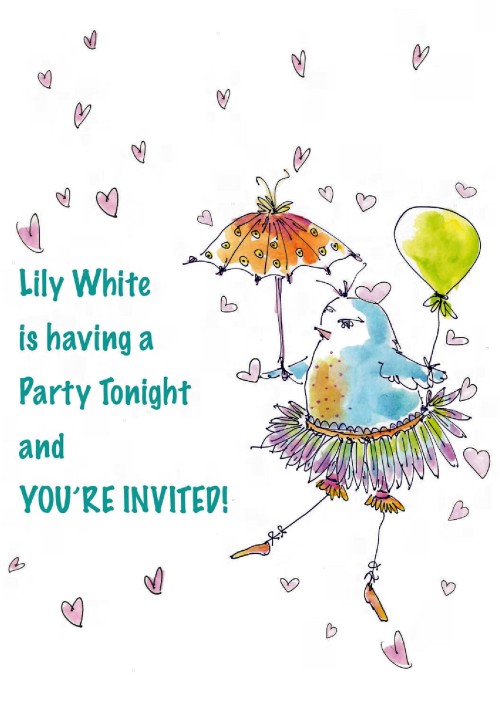 The earliest occurrence of the phrase that I have found is from a poem by one George Cooper, published in St. Nicholas: An Illustrated Magazine for Young Folks (New York: The Century Co.) of July 1887:

“May I go to Miss Lilywhite’s party?”
But Grandmamma shook her head:
“When the birds go to rest,
I think it is best
For mine to go too,” she said.

“Can’t I go to Miss Lilywhite’s party?”
Still Grandmamma shook her head:
“Dear child, tell me how.
You ’re half asleep now;
Don’t ask such a thing,” she said.

Then that little one’s laughter grew hearty:
“Why, Granny,” she said,
“Going to Miss Lilywhite’s party
Means going to bed!”

This poem was published in several Canadian and U.S. newspapers:
– in June 1887—for example in The Evening Journal (Ottawa, Ontario) of Saturday the 18th, and in The Boston Daily Globe (Boston, Massachusetts) of Monday the 20th;
– from July to October 1887.

The phrase has a different meaning in the following from The Cook’s Nook, published in The Stanberry Headlight (Stanberry, Missouri) of Thursday 8th Jun 1933:

Convalescent Cookery for Those Who Attend “Lily White’s Party”
Are any of the members of your family attending “Lily White’s party?” In case that is a new one on you, it should be explained that in some sections of the country a person who is sick abed is said to be “attending Lily White’s party.” The name is supposed to have been invented by a children’s nurse who wanted to make bed more inviting for her young charges. Obviously, the correct garments for such a “party” are long, white robes or pajamas, and the party entertainment consists largely of “pounding the ear” * in sleep.
[…]
Here are some simple foods for “Lily White’s party-goers” which will make the luncheon tray an event instead of a duty:
[&c.]

To sleep is to pound the ear. I think this phrase originated with railroaders. Sleeping in a caboose on a fast-moving train actually consists of pounding one’s ear.

All posts by word histories are licensed under a Creative Commons Attribution-NonCommercial-NoDerivatives 4.0 International Licence.
Follow word histories on WordPress.com