MEANING OF THE PHRASE

The obsolete phrase are you there with your bears? was an exclamation of surprise and annoyance at the reappearance of somebody or something; it meant are you there again?, are you at it again?, what again! so soon?.

The origin of this phrase is unknown.

According to A Dictionary of Catch Phrases, British and American, from the Sixteenth Century to the Present Day (London and New York: Routledge, 1985), by the New Zealand-born British lexicographer Eric Honeywood Partridge (1894-1979) and Paul Beale, the phrase alludes to: 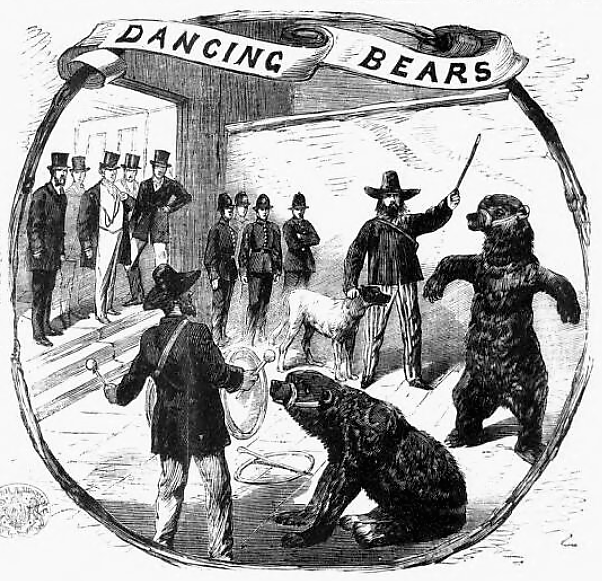 Another explanation is that the phrase originated in the story of a man who, not liking a sermon he had heard on Elisha and the bears, went next Sunday to another church, only to find the same preacher and the same discourse.

This story occurs in Joe Miller’s Jests: Or, The Wits Vade-Mecum. Being a Collection of the most Brilliant Jests; the Politest Repartees; the most Elegant Bons Mots, and most pleasant short Stories in the English Language. First carefully collected in the Company, and many of them transcribed from the Mouth of the Facetious Gentleman, whose Name they bear; and now set forth and published by his lamentable Friend and former Companion, Elijah Jenkins, Esq. (London: Printed and sold by T. Read, 1739), by the English actor Joe Miller (1684-1738) and Elijah Jenkins, pseudonym of the English playwright and biographer John Mottley (1692-1750):

A Gentleman hearing a Parson preach upon the Story of the Children being devoured by the two She Bears, who reviled the old Man, and not much liking his Sermon; some Time after seeing the same Parson come into the Pulpit to preach at another Church: O ho! said he, What are you here with your Bears again.

King James Version (1611):
23 And he [= Elisha] went vp from thence vnto Bethel: and as hee was going vp by the way, there came foorth little children out of the citie, and mocked him, and said vnto him, Goe vp thou bald head, Goe vp thou bald head.
24 And hee turned backe, and looked on them, and cursed them in the Name of the Lord: and there came foorth two shee Beares out of the wood, and tare fortie and two children of them.

HISTORY OF THE PHRASE

The earliest occurrence of the phrase that I have found is from a dialogue between Candius and Silena, in Mother Bombie (London: Printed by Thomas Creede, for Cuthbert Burby, 1598), by the English author John Lyly (circa 1553-1606):

Cand. I loue thee much, giue mee one worde of comfort.
Sil. I faith sir no, and so tell your Maister.
Cand. I haue no Maister, but come to make choise of a Mistresse.
Si. A ha, are you there with your beares.

The phrase occurs in the following passage from Instructions for Forreine Travell. Shewing by what cours, and in what compasse of time, one may take an exact Survey of the Kingdomes and States of Christendome, and arrive to the practicall knowledge of the Languages, to good purpose (London: Printed by T.B. for Humprey Mosley, 1642), by the Anglo-Welsh historian and political writer James Howell (circa 1594-1666):

The French tongue like the Nation, is a bold and hardy speach, therefore the learner must not be bashfull or meale mouth’d in speaking any thing, whatsoever it is, let it come forth confidently whither true or false Sintaxis, for a bold vivacious spirit hath a very great advantage in attaining the French, or indeed any other Language. He must be cautelous not to force any Anglicismes upon the French Tongue, that is certaine vulgar Phrases, Proverbs, and Complements, which are peculiar to the English, and not vendible or used in French, as I heard of one that could not forbeare a great while to salute his Land-Lord by bon matin. Another would be alwayes complaining at play of his mauvaise Fortune: Another when at the racket court he had a ball struck into his hazard, hee would ever and anon cry out, estes vous là avec vos Ours, Are you there with your Beares? which is ridiculous in any other language but English, for every speech hath certaine Idiomes, and customary Phrases of its own, and the French, of all other, hath a kind of contumacy of phrase, in respect of our manner of speaking, proper to it selfe.

The English poet Alexander Brome (1620-1666) used the phrase punningly in The new Knight Errant, published in Songs and other Poems by Alex. Brome Gent. (London: Printed for Henry Brome, at the Star in Little Britain, 1668):

But flesh’d with these spoyles, the next of his toyles,
Was to fall with wild-beasts by the ears,
To the Bear-ward he goeth, and then opened his mouth,
And said, oh! are you there with your bears?

The English naturalist and theologian John Ray (1627-1705) recorded the phrase in A collection of English Proverbs Digested into a convenient Method for the speedy finding any one upon occasion; With Short Annotations. Whereunto are added Local Proverbs with their Explications, Old Proverbial Rhythmes, Less known or Exotick Proverbial Sentences, and Scottish Proverbs (Cambridge: Printed by John Hayes, Printer to the University, for W. Morden, 1678):

You dare as well take a bear by the tooth.
If it were a bear it would bite you.
Are you there with your bears.

The English novelist Samuel Richardson (1689-1761) used “are you thereabouts with your Bears?” in his epistolary novel Pamela; Or, Virtue Rewarded. In a Series of Familiar Letters from a Beautiful Young Damsel to her Parents: And afterwards, in her Exalted Condition, between Her, and Persons of Figure and Quality, upon the most Important and Entertaining Subjects, in Genteel Life (London: Printed for S. Richardson: And Sold by J. Osborn, in Pater-noster Row; And J. Rivington, in St. Paul’s Church-Yard, 1742).