The British-English phrase vicarage tea-party is used to designate something mild, innocuous or uneventful.

For example, this review is from the television programmes published in the Evening Herald (Dublin, County Dublin, Ireland) of Saturday 26th September 1987: 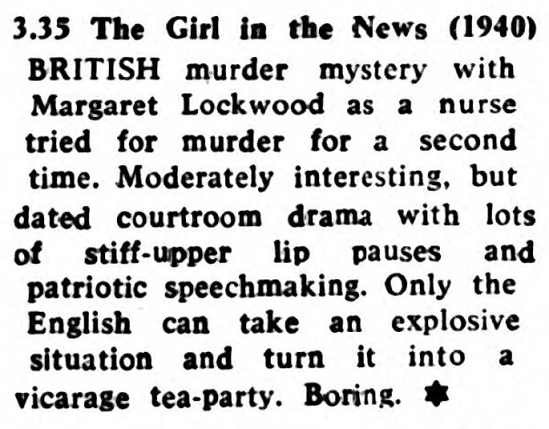 3.35 The Girl in the News (1940)
BRITISH murder mystery with Margaret Lockwood as a nurse tried for murder for a second time. Moderately interesting, but dated courtroom drama with lots of stiff-upper lip pauses and patriotic speechmaking. Only the English can take an explosive situation and turn it into a vicarage tea-party. Boring.

Vicarage tea-parties have long been associated with tediousness, insipidness and lifelessness—as mentioned for example in Next Door To Sanctuary, published in the Liverpool Daily Post (Liverpool, Lancashire, England) of Monday 29th March 1943:

Great doings in the workaday world have been broadcast from our churches during many centuries. Victory at a war’s end especially, and sometimes the fortunes and misfortunes of battle, have been celebrated by chime and beacon. And though the church bells are now reserved for a different purpose the day will come when the whole of the countryside will become suddenly musical with glad tidings of victory. Whenever we think of the good time ahead, so universally longed-for now, the steeples and towers without which a landscape seldom looks complete are on the horizon of our minds. But we are inclined to forget that behind the joy-bells and the church is the vicarage. If the vicarage is recalled at all it is, as an institution, only moderately esteemed. How many times have our novelists and story-tellers, some of them highly distinguished, used the parallel of a vicarage to belittle it? The vicarage tea-party in particular has been their constant butt. Anthony Trollope records some of the most outrageously milk-and-water1 dialogues at such a function, notably in his novel, “The Vicar of Bullhampton”2—and George Moore3 compares Tennyson4’s lapses in his poetry to a curate’s conversation with the bishop at a croquet carnival!

The above-mentioned phrase milk and water also appears in relation to vicarage tea-party in Christmas Stockings of my Youth Held no toy machine guns, but thrilled us with hoops and marbles, by Jane Doe, published in the Aberdeen Press and Journal (Aberdeen, Aberdeenshire, Scotland) of Tuesday 24th December 1935:

Sometimes I come on London nippers huddled in a doorway over some game. But they’ll be doing mysterious things with filthy cigarette cards. And while I marvel at their skill, for they deal as slick as any Society bridge fiend, how I quail at their gangster-like language. Little cigarette-card sharpers most of them must be, judging from the foul accusations of cheating that hold up the “game” every other minute.
The marble tourneys of my youth were milk and water vicarage tea-parties in comparison.

Richard King used vicarage tea-party to denote righteousness when writing of “The Morals of Marlborough5” in his column With Silent Friends, published in The Tatler (London, England) of Wednesday 26th January 1916:

It is not for you and me to criticise Marlborough from the point of view of a vicarage tea-party.

In the following from the Daily Herald (London, England) of Saturday 30th October 1926, vicarage tea-party is used as a term of comparison denoting respectableness:

The appearance of a bare-legged dancer in a song-scena at the Covent Garden Opera House, London, has so shocked the patrons of the Royal Opera House dances that the directors have decided that her costume must be “instantly modified,” or the production in which she appears will be banned.
In “While the Sahara Sleeps” there is a scene between the sheik and his Arabian dancing girl, who appears dressed in silver tinsel and with bare legs.
[…]
“Frankly we are bewildered at the ultimatum,” said Mr. Lawrence Wright, the producer of the scena, to a Daily Herald representative yesterday. “The scena contains nothing that would not be considered perfectly proper at any vicarage tea party, and, besides, bare legs are the vogue at all the smartest fancy dress balls nowadays.”

In Chapter X of The Gang-Smasher, published in The Brooklyn Daily Times (Brooklyn, New York, USA) of Saturday 8th November 1930, the British author of adventure and police novels Hugh Clevely (1898-1964) used vicarage tea-party to denote something uneventful when Jefferson D. Peters, “a New York detective”, tells John Martinson, “globe-trotter and soldier of fortune”, how he saved him from gangsters, whom he (Peters) was “unreluctantly compelled to plug” when they “pulled out their gats”:

Peters related these occurrences sitting on the end of Martinson’s bed puffing at a cigar. He related them casually, as one might tell the story of something a little more uninteresting than a vicarage tea-party.

In the Bexhill-on-Sea Observer (Bexhill, Sussex, England) of Saturday 2nd January 1932, the phrase is quoted as a term of comparison denoting mildness:

“Don’t listen to the rubbish which is being talked against disarmament” is the outspoken introduction to an editorial note in the St. Barnabas’ portion of the Parish Magazine. The writer adds:—“You don’t want your sons’ and daughters’ lives to flare out in a hellish war, compared to which the Great War was merely a vicarage tea party.”

The phrase is used as a term of comparison denoting uneventfulness in the account of a football game between Dundee and Dunfermline, published in the Evening Telegraph (Dundee, Angus, Scotland) of Monday 10th September 1934:

Some 18,000 people went away disappointed with a woeful exhibition of forward play by both teams, and with a game which was no more exciting than a vicarage tea-party. The goalless draw was a fair enough result.

The earliest use that I have found of vicarage tea-party as a proper metaphor is from the account of a football match between Chelsea and Everton, played at Goodison Park, Everton’s home ground, and won by five goals to one by Chelsea—account published in The People (London, England) of Sunday 15th November 1964:

After the Battle of Goodison, this was a vicarage tea party, with the hosts taking the biscuit.

The phrase was used attributively in the review of The Passion Play, which was produced at the Empire Pool, Wembley—review published in The Observer (London, England) of Sunday 30th April 1967:

The credit must go to Matthias Kaindl’s interpretation of the central figure. This is a Christ strong and gentle. Kaindl—himself a carpenter—is terribly hampered by having to mime to vicarage tea-party English, but he never loses his dignity.