A puzzle published in The Hibernian Magazine, or, Compendium of Entertaining Knowledge (Dublin, Ireland) in 1774 punned on the humble of humble pie, which may indicate that the latter term was already used figuratively at that time. The following is from the October issue: 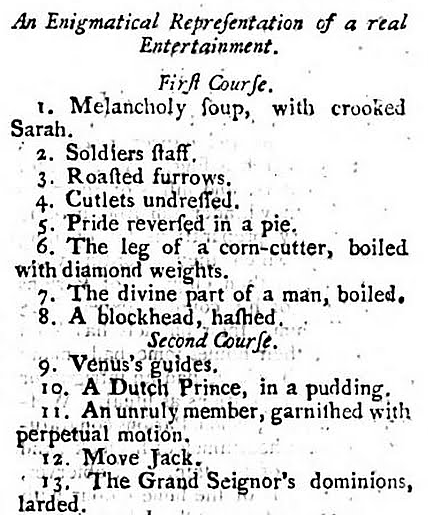 The November issue had:

The phrase to eat humble pie means to make a humble apology and accept humiliation (synonym: to eat crow). The earliest instance that I have found is from a political poem, dated 1st January 1812, published in The Carolina Federal Republican (New Bern, North Carolina) of 18th January 1812:

We’ll build a fleet and raise an army;—
Create, on paper, “war and speck;”
Take Nova Scotia and Quebec;—
Frighten Great Britain by our tones,
To fall down on her marrow bones;—
Make our choice spirits of the south,
To sink her fleet, by word of mouth,
This is the plan we now must try
To make her swallow humble pie.

Another early use is found in an article about the alleged involvement of the reformist politician Francis Burdett (1770-1844) and of the radical orator and agitator Henry Hunt (1773-1835) in a plot to overthrow the British government, published in The Morning Post (London) of 13th September 1819:

We cannot believe that the whole farce is enacted to humble Sir Francis still lower, and to exhibit him in the character of sycophant and toad-eater to Champion Hunt, whom he professes to despise, and who is in truth as despicable, if he is as nervous, as himself. It seems Sir Francis keeps a Car, and Flags and Devices, ready cut and dry, for all revolutionary uses and demands. The Committee, bless us! of Two Hundred, insist upon his lending these trophies (of his own buying) to his arch-enemy and supplanter Hunt; the poor crest and chop fallen Burdett is to eat humble pie, and play second fiddle.

The English philologist Robert Forby (1759-1825) defined, and made remarks on, the phrase in The Vocabulary of East Anglia (London, 1830):

“To make one eat humble pie.”—i.e. To make him lower his tone, and be submissive. It may possibly be derived from the “umbles” of the deer, which were the perquisite of the huntsman; and if so, it should be written umble-pie, the food of inferiors.

Robert Forby was right in assuming that the phrase alludes to an umble pie, that is, a pie made with umbles, umbles denoting the edible inward parts of an animal, usually of a deer. The form umble pie is first recorded in the diary of Samuel Pepys in 1663; the earliest occurrence of the variant humble pie, with initial h-, is from The closet of the eminently learned Sir Kenelme Digbie Kt. opened whereby is discovered several ways for making of metheglin, sider, cherry-wine, &c. : together with excellent directions for cookery, as also for preserving, conserving, candying, &c. (London, 1669), by the English courtier and natural philosopher Kenelm Digby (1603-65):

To season Humble Pyes […].
Bake Humble-Pyes without chapping them small in a Pye, seasoned with Pepper and Salt, adding a pretty deal of Parsley, a little sweet-marjoram and Savoury, and a very little Thyme.

But the phrase to eat humble pie puns on the adjective humble, meaning submissive. The initial h- of this adjective was originally mute, and this pronunciation prevailed down to the 19th century. For example, the English novelist Charles Dickens (1812-70) spelt it umble to render Uriah Heep and his mother’s pronunciation in The Personal History, Adventures, Experience, and Observation of David Copperfield the Younger of Blunderstone Rookery (Which He Never Meant to Publish on Any Account), published in 1850:

“My Uriah,” said Mrs. Heep, “has looked forward to this, sir, a long while. He had his fears that our umbleness stood in the way, and I joined in them myself. Umble we are, umble we have been, umble we shall ever be,” said Mrs. Heep.

The adjective humble is, through Old French, from Latin humilis, low, lowly, small, slight, itself based on humus, earth, ground, soil. (Because of the phonetic environment, a -b- was inserted in French humble, as it was in nombre (hence English number), from Latin numerus.)

The noun umbles, denoting the entrails of an animal, is a variant of numbles (the loss of the initial n-, by wrong division, also occurred in words such as adder, from Old English nædre). The English noun numbles is from Middle French nombles, in turn an alteration, with dissimilation of l- to n-, of lombles, meaning loins, from Latin lumbulus, diminutive of lumbus, loin. (The English words loin, lumbar and lumbago are based on lumbus.)

Robert Forby wrote that umble pie was “the food of inferiors”. Although the edible viscera were originally left for the servants, while the better cuts belonged to the masters, umble pie was not considered an inferior dish. On 5th July 1662, the English naval administrator and diarist Samuel Pepys (1633-1703) served both venison and umble pie for dinner to Sir William Penn, the admiral, and Sir William’s son, William, remembered as the founder of Pennsylvania:

(edited by Henry B. Wheatley – published by George E. Croscup, New York, 1893)
At noon had Sir W. Pen, who I hate with all my heart for his base treacherous tricks, but yet I think it not policy to declare it yet, and his son William, to my house to dinner, where was also Mr. Creed and my cozen Harry Alcocke. I having some venison given me a day or two ago, and so I had a shoulder roasted, another baked, and the umbles baked in a pie, and all very well done.

(edited by Henry B. Wheatley – published by George E. Croscup, New York, 1893)
Going in I stepped to Sir W. Batten, and there staid and talked with him (my Lady being in the country), and sent for some lobsters, and Mrs. Turner came in, and did bring us an umble pie hot out of her oven, extraordinary good.

Other jocular phrases existed. A Dictionary of the Sussex Dialect and Collection of Provincialisms in use in the County of Sussex (1875), by the Rev. W. D. Parish, contains:

To eat carp-pie is to submit to another person’s carping at your actions.

In A glossary of words used in the Wapentakes of Manley and Corringham, Lincolnshire (London, 1877), Edward Peacock recorded:

A person who has been much humiliated is said to have eaten dirt-pie.
To eat rue-pie is to repent.

In the last phrase, the noun rue, denoting a perennial evergreen shrub with bitter strong-scented lobed leaves which are used in herbal medicine, is associated with the etymologically unrelated noun rue, meaning sorrow, repentance, regret. The English poet and playwright William Shakespeare (1564-1616) puns on these two meanings in The Tragicall Historie of Hamlet, Prince of Denmarke (between 1599 and 1602) when he makes Ophelia say in her madness:

(Quarto 2, 1604)
There’s Rosemary, thats for remembrance, pray you loue re-
member, and there is Pancies, thats for thoughts.
[…]
There’s Fennill for you, and Colembines, there’s Rewe for
you, & heere’s some for me, we may call it herbe of Grace a Sondaies,
you may weare your Rewe with a difference.