The phrase an egg yesterday and a feather-duster tomorrow, and its numerous variants, are used:
– of the inanity of life;
– of the transitoriness of success.

This phrase originated in the captions to a cartoon known as The Dejected Rooster, by the U.S. cartoonist Mark Fenderson (1873-1944), published by the weekly magazine Life (New York City: Life Publishing Company) in 1907.

For example, the cartoon appeared as follows in an advertisement for Life’s Prints, published in Life of Thursday 10th October 1907: 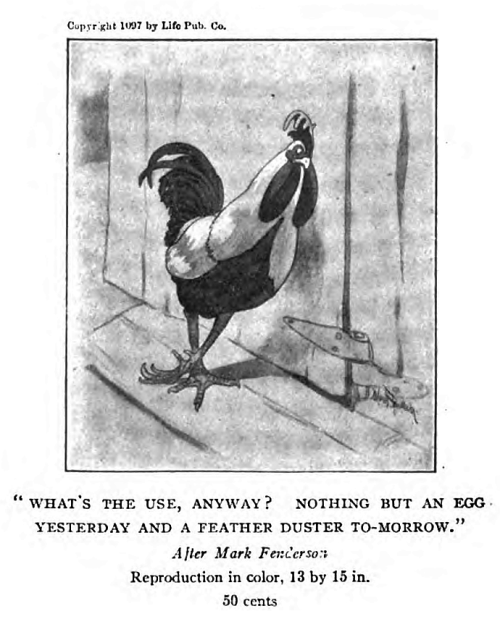 “WHAT’S THE USE, ANYWAY? NOTHING BUT AN EGG YESTERDAY AND A FEATHER DUSTER TO-MORROW.”
After Mark Fenderson
Reproduction in color, 13 by 15 in.
50 cents

On Thursday 1st August 1907, Life had published the same cartoon with the following caption: 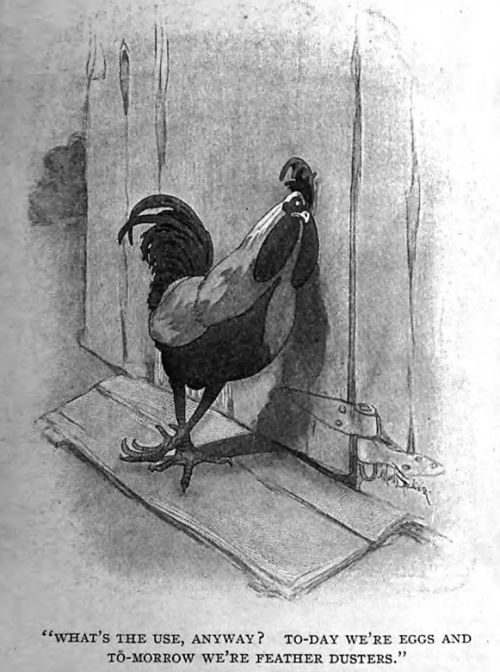 The phrase appeared in both British and Australian English very early, probably because the weekly magazine Life was “published simultaneously in the United States, Great Britain, Canada and British Possessions.”

These are, in chronological order, the other early occurrences of the phrase that I have found:

1-: From the following advertisement, published in The Selma Morning Times (Selma, Alabama) of Sunday 11th August 1907:

“WHAT’S THE USE?”
quoth the disconsolate Rooster—Yesterday an egg and tomorrow a Feather Duster at Butler’s.

2-: From the following advertisement, published in The Daily Morning Journal and Courier (New Haven, Connecticut) of Tuesday 27th August 1907:

AS THE ROOSTER SAID———-
when he saw a chicken hatching: “What’s the use? An egg yesterday and a feather duster to-morrow.”
BUT———-
Life is worth living when you can buy such knitted neckties as I sell for 55c per neck.
Yours,
JIM DISBROW
He Sells Shirts.
Church & Center Streets.

3-: From Chat from the Capital. Modes of the Moment. Notes by Lady Correspondents, published in the Preston Herald (Preston, Lancashire, England) of Wednesday 25th September 1907:

From affluence to poverty is not the uncommon fate of singers, song writers, actors, and actresses, who, in their time, have contributed not a little to our store of light-hearted gaiety. Their fate reflects that of the spring chicken, which has been depicted as saying “We are eggs to-day and feather dusters to-morrow.” With few exceptions our songs are like much of the literature of the present day, which dies almost as soon as it is born.

Something about the poultry show in town now reminds one of the picture in “Life” of the lone and despondent rooster leaning dejectedly up against the barn door, with tearful eyes looking heavenward, while he ejaculates, “What’s the use, anyhow; nothing but an egg yesterday and a feather duster tomorrow.”

5-: From the following advertisement, published in The Pilot (Blair, Nebraska) of Wednesday 27th November 1907:

THE TURKEY SAYS: “What’s the use any how? Nothin’ but an egg yesterday and a feather duster tomorrow.”
No Grouches Here
The turkey has a kick coming these days. So would we if we were going to be hung.
But we’re not. We have been treated fine by the people of Blair and vicinity, since we started in business here.
We have nothing but smiles and thanks for you all at this Thanksgiving time.
Of course you will want us to supply your Thanksgiving wants. Then we’ll smile some more and you will smile with us.
Order early, there going to be lots to do.
C. J. Robinson.
P. S.—People wont [sic] have anything but Elijah’s Manna these days, and we don’t blame ’em.

6-: From the column Such Is Life, published in the New-State Tribune (Muskogee, Oklahoma) of Thursday 5th December 1907:

“What’s the use?” soliloquized the old rooster, as he leaned up against the barn door, with his legs crossed. “What’s the use? Today, an egg, tomorrow a feather-duster.”

7-: From the following advertisement, published in The Advertiser (Adelaide, South Australia) of Thursday 19th December 1907:

WHAT’S THE USE?
Says the Rooster,
We’re Eggs to-day and Feather Dusters
to-morrow.
What’s the use of ordering a Suit that looks well for a day or two—and then for ever after is consigned to the old clothes basket?
My
32/6 MADE TO ORDER SUITS
represent the finest value in Australia. Get acquainted with them.