The following photograph and caption are from “Wearing their Old School Tie”: Old Public School Boys Fight for the Halford Hewitt Cup at Deal, published in The Bystander (London) on Wednesday 19th April 1933: 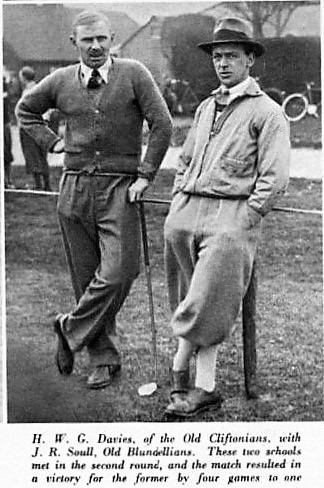 H. W. G. Davies, of the Old Cliftonians, with J. R. Soull, Old Blundellians. These two schools met in the second round, and the match resulted in a victory for the former by four games to one.

Testimonial to the Old School Tie

The British phrase old school tie is used to refer to the group loyalty, social class and traditional attitudes associated with people who attended public schools, from the necktie with a characteristic pattern indicating that the wearer is a former pupil of a particular public school.

The earliest instances of old school tie with these social connotations that I have found relate to changes in the recruitment of police officers; the following is from Best Dressed Police: Our Men Lead the World, published in The Citizen (Gloucester, Gloucestershire) on Wednesday 18th September 1929:

I, who am well-known to the—I mean, I who know the police well, am certain that none can hold a candle to our Force as far as matters sartorial go. To start with, the type of policeman is much different nowadays. Gone is Sandy, with his careless “Och Aye” and Taffy, from Abergumboil with his nonchalant “Well Whateffer.” Now it is P. C. Augustus Vere de Vere-Smythe. Eton¹ and Balliol²! There are so many outside influences in the police force to-day that one never knows when one is going to bump into an electrician, a barrister, a carpenter, a stockbroker, an undergraduate or a commercial traveller. You can find any of these in the police force.
There is no careless and hurried throwing on of clothes in the Force now. Before he goes on duty, every self-respecting man in blue (if they do not mind me calling them this) chooses his clothes with care. […]
And of course, as clothes make the man this dress question has a great influence on the character of the Boys in Blue (if they do not mind me calling them this). No more do they say—“Green Street sir? First left, hup the street a bit till you comes to the ‘Black ’Orse,’ turn right down the ’ill past the ‘Red Horstrich’ and hup the road till you comes to the ‘’En and Chickens.’” No! Now it is—“Green Street sir? Why certainly! As a matter of fact it is a great pleasure for me. If you don’t mind waiting while I tell that old man over there to mind the traffic for me until I come back. I will come along with you myself.” As Shakespeare said ‘A friend in….
So I can safely say that our lads in the uniform (if they do not mind me calling them this), far from being behind in matter sartorial, really lead the world.
To conclude with, I might mention one point which points out clearly all that I have said….
I always refuse to be run in by any policeman unless he is wearing my old school tie!
G.W.L.

¹ Eton: a public school in southern England; founded in 1440 by Henry VI to prepare scholars for King’s College, Cambridge
² Balliol: one of the colleges of the University of Oxford; founded in 1263

The Scotsman (Edinburgh) of Saturday 11th January 1930 also evoked the changes that were taking place in the London Metropolitan Police:

Complaint was made to-day by Mr Frank Pick, the general manager of the Underground Railway, and a member of the Royal Commission on Police Powers, that the police were recruited almost completely from the working class, and he urged that men with a liberal education should join the force. Further inquiries at Scotland Yard might have gratified Mr Pick, for I have been told there that, though recruitment of men who have received a secondary school education provides still a small proportion of the Metropolitan Police, it is steadily increasing. Brawn is no longer the chief or, indeed, an essential qualification for recruits, and since the increase of pay and pension the force has been gradually attracting a new and better educated type. Some of the professional men attached to the Yard are now sorry that they did not join as ordinary constables, their regret increasing as they see men of lower educational qualifications pass to higher salary scales than their own. It is not uncommon for these professional men to be saluted in the morning by a “man in blue,” and to meet the same man later in the day in an adjoining cafe wearing his old school tie. Such men, it is hardly necessary to say, have ambitions other than point duty, but to get promotion they do not mind going through the ranks.

On Tuesday 1st August 1933, the London Letter—titled that day Old School Ties—of the Nottingham Journal (Nottingham, Nottinghamshire) gave an account of “the essence of much of the criticism directed against the proposals to institute a new officer class in the police force” and concluded with:

The introduction of the “old school tie” atmosphere into the force may have to be carefully watched.

Laughable Skit.
The decision of the Police Commissioners to introduce more undergraduates into the force provided an Edgware wit to create a skit on the police force during the week-end. For months two policemen, made of plywood, have stood near Old Rectory Gardens, in Station-road, and on Sunday one received an addition to his uniform in the way of a brightly-coloured tie. Underneath were the words, boldly written in chalk, “Wearing his old school tie.” The skit certainly evoked humorous remarks from passers-by.

The Old School Tie is a song by the Western Brothers (Kenneth Western (1899-1963) and George Western (1895-1969), who were in fact second cousins), a double act that satirised the British upper classes. The earliest mention of this song that I have found is from The Stage (London) of 17th November 1932. On 19th October 1933, the same newspaper remarked:

The Western Brothers still find their song about the old school tie their most popular; it pleases people who have never been to a public school, and does not offend those who have.

This advertisement was published in the Hastings & St. Leonards Observer (Sussex) of Saturday 7th July 1934: 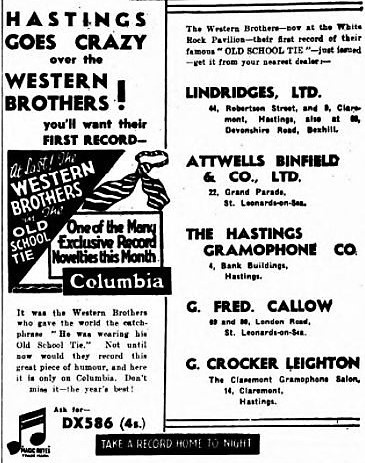 It was the Western Brothers who gave the world the catchphrase “He was wearing his Old School Tie.” Not until now would they record this great piece of humour, and here it is only on Columbia. Don’t miss it—the year’s best!