The phrase curate’s egg means something that has both good and bad characteristics or parts.

This phrase was popularised by True Humility, a cartoon by George du Maurier *, published in Punch, or the London Charivari (London, England) of Saturday 9th November 1895. This cartoon depicts a meek curate who, having been served a stale egg while breakfasting with his bishop, tries not to offend his host; the caption is as follows:

Right Reverend Host. “I’m afraid you’ve got a bad Egg, Mr. Jones!”
The Curate. “Oh no, my Lord, I assure you! Parts of it are excellent!” 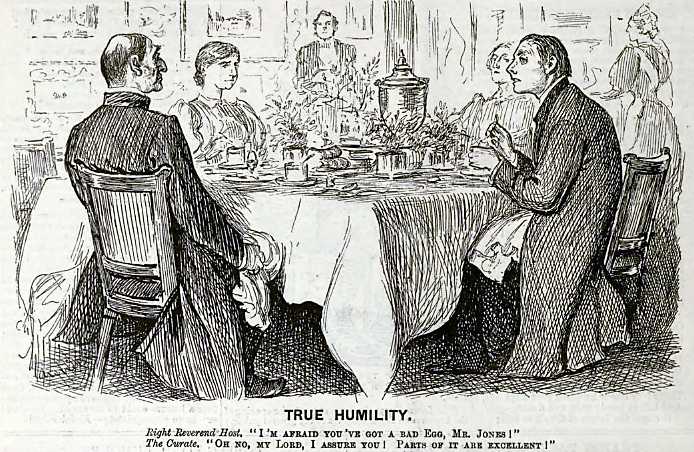 Of course, a stale egg is bad all through, and the cartoon makes fun of over-dutiful, or self-serving, deference.

Although this cartoon popularised it, the story of the meek curate eating a bad egg when having breakfast with his bishop, as well as similar ones, already existed. These are the earliest occurrences that I have found:

1-: From the speech that one Dr. Cooke made at the General Synod of Ulster, as transcribed in The Northern Whig (Belfast, Antrim, Ireland) of Saturday 29th June 1839:

I, for one, do say, that, if that is to be permitted, a large proportion of the well-thinking community will say, as one said to a country elder in Cookstown, when he had a very bad egg beside him, but, being a very modest man, instead of putting away the egg, he stirred it up, but his neighbour, making the discovery by another organ than that of vision, said, “Friend, if you do not put away that egg, you and I must part company.”

2-: From the speech that one Percival Walsh made at the meeting of Freemen of the City of Oxford, held on Saturday 22nd August 1874, as transcribed in Jackson’s Oxford Journal (Oxford, Oxfordshire, England) of Saturday 29th August 1874—Percival Walsh was reported as mentioning:

the old anecdote of the Curate who went to breakfast with his Bishop, and so anxious was he to please that he devoured a bad egg with an appearance of great gusto. The lady of the house called attention to this egg, which she had discovered by other means than taste, but he was so anxious to please that he said “Thank you, my lady, I like my eggs rather high.” (Laughter.)

It is astonishing to what an extent men, by no means destitute of self-respect, will carry the principles of episcopal adoration. A man will hold an umbrella over a bishop’s head until he is wet to the skin himself. A man will seize hold of the bag in which the bishop carries his episcopal toggery, although the burly prelate is much better able to sustain a bundle. We know of a young Levite who had a bad egg brought to table when he was at an episcopal breakfast. The Bishop was shocked, and desired that another should be procured. “No, thank you, my lord,” he exclaimed, with a gesture of utter abnegation, “it’s good enough for me!” and bolted his evil-smelling portion.

In spite of the drenching rain and thunderstorms which have deluged almost every other part of England, and which have turned the Oxford and the Huntington racecourses into large inland lakes, I am told that the Wimbledon gathering this year has been an immense success; […] it is certain that the numbers of Volunteers under arms exceed those of last and previous years, though one or two regiments did not put in an appearance at all. Of course, if I am to believe half of what I hear, the Volunteers who actually came together rather enjoyed the rain than otherwise, much as the modest ensign who had just joined assured his colonel’s wife at breakfast that he “rather liked bad eggs.”

A nervous young man, asked at breakfast to excuse the eggs, which were not of yesterday’s growth, replied, “Oh, never mind; I like bad eggs.”

6-: From an article titled The Eggs of Long Ago, published in The Globe and Traveller (London, England) of Tuesday 25th September 1894:

Men’s tastes in regard to eggs differ widely. The Spaniards have a proverb, “It’s too late to cheep now.” A similar taste prevails in Iceland with regard to eider ducks’ eggs. Even in this country people are to be found who are valiant egg-eaters. There is an amusing story illustrating this fact in connection with a clerical breakfast party given by Thirlwall, the bishop. The meal had proceeded successfully up to a certain point, when it was perceived that there was a subdued commotion among the guests. “Ahem!” as the scullion said when he swallowed the dishclout, “ahem!” said the bishop, “there’s a very odd smell in the room, I think.” “My egg, my lord!” said an abject-looking curate at the other end of the table. “Ah,” said his reverend host, turning to a servant, “take that gentleman’s egg away; it is a bad one.” “O no, my lord!” exclaimed the self-abasing curate, continuing his repast, “it is quite good enough for me!” The bishop’s answer is not recorded, but we presume he asked the curate in his politest tones to step outside and finish his egg at the far end of the garden.

7-: From the Sheffield and Rotherham Independent (Sheffield, Yorkshire, England) of Thursday 31st January 1895:

If Russia is to obtain internal reforms she must look for them through the hands of the Czar, not to any such machinery as that of the Zemstvos, or local assemblies. It was Alexander II. who, in his reforming days, gave to Russia Justices of the Peace, who stood between the peasant and the landed proprietors, and constituted the Zemstvos or district councils, in which peasant representatives and landed proprietors met on equal terms to conduct local affairs. Under Alexander III. neither Justices of the Peace nor Zemstvos were abolished, but their scope of action was circumscribed. It would seem, from the language of the new Czar, that in the ferment of the public mind arising from the hopes of the new reign these Zemstvos have been indulging in some manifestations of reforming zeal, probably mild enough regarded from a western standpoint, but dangerous in the eyes of the Autocrat. The snub administered to them met with shouts of approval from the assembled delegates, who may be supposed thus to express their preference for autocracy. Like the curate breakfasting with the Bishop, they are so uncomplaining as even to prefer a bad egg.