In British English, cobbler, short for cobbler’s awl 1, is rhyming slang 2 for ball.

1 The noun awl designates a pointed hand tool with a fluted blade used for piercing holes in leather.

2 Rhyming slang is a type of slang that replaces words with rhyming words or phrases, typically with the rhyming element omitted. For example, in the phrase not to have a scooby, meaning not to have a clue, scooby is:
– short for Scooby Doo, the name of a cartoon dog which features in several U.S. television series and films;
– rhyming slang for clue.

The earliest occurrence in print of cobbler, rhyming slang for ball, is from Cheapjack: Being the True History of a Young Man’s Adventures as a Fortune-Teller, Grafter, Knocker-Worker, and Mounted Pitcher on the Market-Places and Fairgrounds of a Modern but still Romantic England (London: William Heinemann Ltd. – New York: Frederick Stokes & Company, 1934), by Philip Allingham:

I had last seen him [= London Joe] on a fair in the north where he had been working “the cobbler.” This is the same sort of game as “the spot.” […]
The cobbler is even more simple. It is a ball game—“cobbler” is the slang for ball—and London Joe’s joint is probably known by the majority of suckers as “the swinging ball game.”
All the player is asked to do is to swing a ball that hangs from the top of the stall by a piece of string. If he can knock down a small skittle with the ball on its backward swing he wins a prize.

The plural cobblers, rhyming slang for balls, i.e., testicles, occurs for example in The Gilt Kid (Jonathan Cape – London, 1936), a novel set in London, particularly in the underworld of Soho, by the British author James Curtis (born Geoffrey Basil Maiden – 1907-77)—in the following passage, the eponymous hero and a character named Scaley have just got trapped while committing a burglary:

‘Well, they got us by the cobblers.’
‘How d’you figure that out?’
‘[…] All they got to do now is to shut that bloody door and drop the bar. You can’t screw that, not with the bar down. We can’t get out that way.’

By extension, the plural cobblers is used figuratively to mean nonsense, rubbish—especially in the phrase a load of cobblers and variants.

This phrase is first recorded in print—as that’s all cobblers—in Against the Law (London: Weidenfeld & Nicolson, 1955), by Peter Wildeblood (1923-1999), journalist and campaigner for homosexual law reform.

These are the earliest occurrences of the phrase that I have found, in chronological order:

1-: From a television review by George Melly, published in The Observer (London, England) of Sunday 4th August 1963:

A load of old cobblers

It’s been a hard week to feel glad you are British, and with a few notable exceptions the two channels haven’t made it any easier.
“You don’t ’alf talk a load of old cobblers” said the patient Harold Steptoe 3, to his demonic little dad. From Wednesday on I found this statement a great help.

3 Harold Steptoe, played by the English actor Harry H. Corbett (1925-1982), is a character in Steptoe and Son, a British sitcom about a father-and-son rag-and-bone business, first broadcast by the BBC from 1962 to 1965; Harold’s father, Albert Steptoe, was played by the Irish actor Wilfrid Brambell (1912-1985).

2-: From a letter by one Robin Smyth, published in The Stage and Television Today (London, England) of Thursday 9th September 1965:

Dear Sir,
I feel obliged to reply to your correspondent, Alan Hardman (Television Today, August 26), who wails so bitterly and so egotistically about his misfortunate career […].
[…]
I must be blunt, Mister Hardman, your letter was a right load of cobblers.

3-: From a book review by Irving Wardle, published in The Observer (London, England) of Sunday 15th May 1966:

It doesn’t mean very much to call a book readable: the word is too ambiguous. Reviewers, naturally enough, apply it gratefully to any novel they have got through at record speed, no matter how empty the experience. But in novel-reading as in everything else you don’t get something for nothing: you don’t drive through great novels with the windows up, you get out and push. They, too, are readable in the sense that they convince you that the effort is worth while. If readability of this kind is rare it is because the reward, all too often, turns out to be a load of old cobblers.

4-: From the caption to the following cartoon, published in the Daily Mirror (London, England) of Wednesday 21st June 1967: 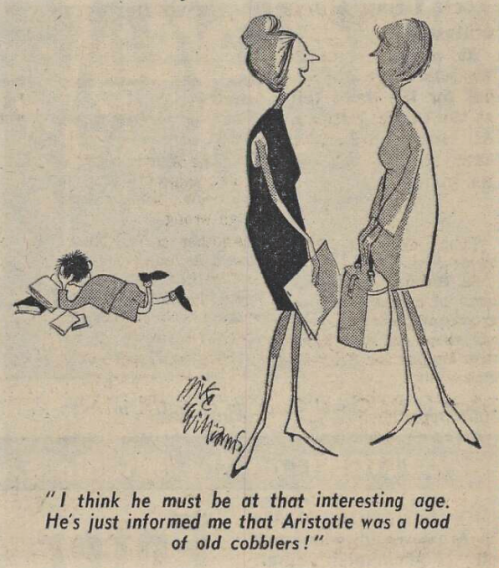 “I think he must be at that interesting age. He’s just informed me that Aristotle was a load of old cobblers!”