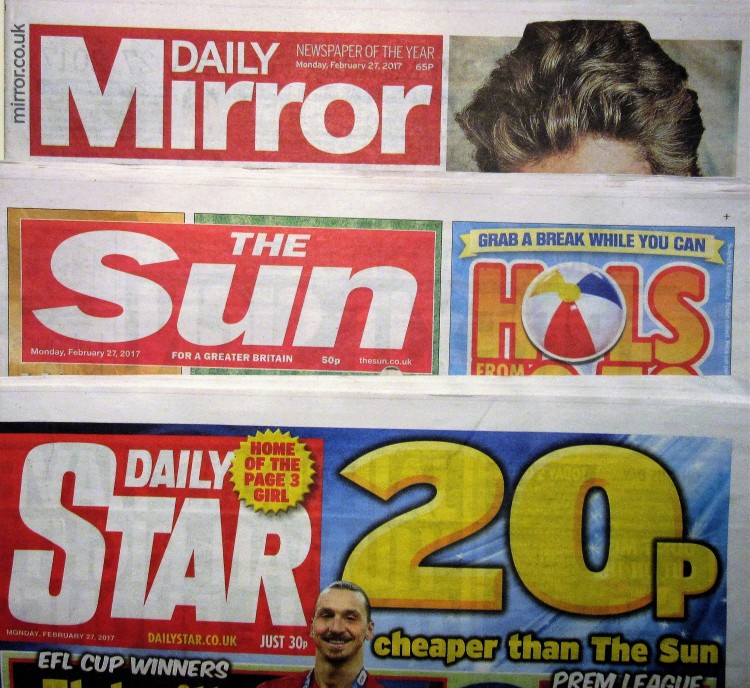 In the following, the noun tabloid has the sense of a newspaper having pages half the size of those of the average broadsheet, aimed at the mass market, with relatively little serious political or economic content but considerable amounts of sport, celebrity gossip, scandal and trivial but unusual news.

In British English, the noun red top denotes a tabloid; the adjective red-top means of, or relating to, a tabloid.

It is an allusion to the fact that the mastheads of these newspapers consist of bold white lettering on a red background.

The British author and newspaper columnist Keith Waterhouse (1929-2009) coined the term red masthead in Waterhouse on Newspaper Style, first published in 1989; he remarks that the original definition of the noun tabloid, “a newspaper of small format”, no longer permits meaningful differentiation between newspapers, since, he says, “all the mass circulation papers are by now tabloid in size except for the Sunday Express”, so that he gives the following definition:

What we really mean by the tabloids, or what we primarily mean, and certainly what our guardians of morality and decent standards mean when castigating ‘the gutter press’, are the Sun, the Daily Star, the Daily Mirror, the News of the World, the Sunday Mirror and the People – in other words, what might be termed the ‘red mastheads’ tabloids.

The first recorded use of the noun red top in the sense of a tabloid is from The Irish Times of 9th May 1995:

Production costs on the increase

Labour costs, the number of people employed and trade union practices were major factors in increasing production costs of Irish newspapers and widening the price differential with newspapers from the UK, Mr Eamon Carberry, of the Irish Business and Employers Confederation (IBEC), said.
He said the fall in sales of Irish newspapers had been matched by the increased sales of British “red tops”, the trade name for tabloid newspapers. He said that while common language and cultural overlap were factors giving UK newspapers a niche in the Irish newspaper market, industrial relations practices and costs did not compare favourably with Fleet Street.

The first known mention of the adjective red-top applied to tabloids is from The Guardian (London) of 19th August 1996 (ABC: Audit Bureau of Circulation; owned by the media industry, it independently verifies and reports on media performance.):

Production gremlins prevented us from printing July’s ABC newspaper circulation figures last week. They show all the so-called ‘red-top’ downmarket tabloids except the Baywatch-fixated Daily Star (boosted by an improved performance in Ireland) shedding sales year-on-year, and the whole Sunday sector down apart from the Mail on Sunday and Sunday Times.
Neither of the Express titles, despite new editors, new sections and huge group investment, has managed to add readers, with Sue Douglas’s Sunday Express — losing a daunting 10,82 per cent of circulation year-on-year — seemingly facing the more uphill task of the two.

The figures in question show that, among the four red tops listed (The Sun, the Daily Mirror, the Daily Record and the Daily Star), the first three have sold less: 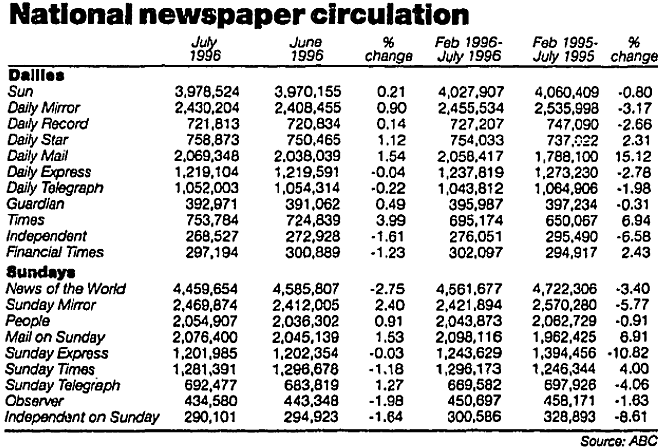 (cf. also the Page-Three girl of the British tabloid The Sun)

alphabetical list, and description, of the red-top British tabloids
according to British Newspapers Online

– Daily Sport (defunct). Former stablemate of the Sunday Sport – an unapologetically trashy tabloid, with no pretensions at all to hard news coverage

– Daily Star. Daily red-top tabloid launched in 1978 with the aim of competing for The Sun’s readership

– News of the World (defunct). The English-speaking world’s biggest-selling Sunday newspaper until it closed in 2011 over the phone-hacking scandal

– Scottish News of the World (defunct). Scottish edition of the English-speaking world’s biggest-selling Sunday newspaper, closed in the wake of the phone-hacking scandal

– The Sun. The red-top par excellence, founded in 1964 and owned by Rupert Murdoch’s News International

– The Sun on Sunday. Red-top tabloid, Sunday edition of the UK’s biggest-selling newspaper

– Sunday Mirror. Like its daily namesake, a left-wing populist tabloid with little in the way of hard news

– Sunday People. Left-wing red-top tabloid published on Sundays. Very little to choose between it and its more successful sister paper, the Sunday Mirror

– Sunday Sport. Weekly tabloid notorious for its lack of news and its surfeit of “glamour” models and chatline ads