The noun stroke denotes a comforting gesture of approval or congratulation, and, by extension, a flattering or friendly remark. The Canadian-born U.S. psychiatrist Eric Berne (1910-1970) defined a stroke “as the fundamental unit of social action” in Games People Play: The Psychology of Human Relationships (New York: Grove Press, 1964):

‘Stroking’ may be used as a general term for intimate physical contact; in practice it may take various forms. Some people literally stroke an infant; others hug or pat it, while some people pinch it playfully or flip it with a fingertip. These all have their analogues in conversation, so that it seems one might predict how an individual would handle a baby by listening to him talk. By an extension of meaning, ‘stroking’ may be employed colloquially to denote any act implying recognition of another’s presence. Hence a stroke may be used as the fundamental unit of social action. An exchange of strokes constitutes a transaction, which is the unit of social intercourse.

These are the earliest occurrences of different strokes for different folks that I have found, in chronological order:

Em Tunnell 1, on the coaching staff of the New York Giants, has a saying, “Different strokes for different folks.” It could apply to numerous sports, and to Henry Hudson. It wasn’t a stroke of luck when they played Group 4 Middletown Township. The different strokes could be Group 1 competitors.

2-: From an interview, by Dick Young, published in the Daily News (New York City, New York) of Saturday 24th September 1966:

Q. Name and occupation, please.
A. Allie Sherman, head coach of the New York Giants.
Q. That is the team which lost to Dallas last week, 52-7?
A. We’re not that bad.
Q. There is a strange familiarity to those words. I’ve been hearing that about the Yankees for two years. I heard it when they finished sixth, and I’m still hearing it. Obviously they are that bad, or close to it.
A. I don’t know that much about baseball. It’s like Em Tunnell says, different strokes for different folks. I can’t speak with authority about the Yankees, but I can tell you about the Dallas game, and I say we’re not that bad. If we finished on top by the same score, I’d say we’re not that good. There is something called the meat of the game. It applies to a three-touchdown difference. The scores that come after that aren’t real.

3-: From an article about the African-American boxer Muhammad Ali (Cassius Marcellus Clay – 1942-2016), by Darrell Mack, of United Press International, published in several newspapers on Friday 11th November 1966—for example in The Berkshire Eagle (Pittsfield, Massachusetts):

Back to a la Bob Hope. Clay, the comedian, said:
— “I don’t have any punch. I just hit a man so many times he wished I had a punch.”
— On knockout punches in the Liston, Floyd Patterson and Karl Mildenberger fights: “I got different strokes for different folks.”

4-: From The Organization Men And Cassius Clay, by John Crittenden, published in The Miami News (Miami, Florida) of Wednesday 23rd November 1966:

In Houston there was a man trying to pick an argument with Herbert 2 and Herbert wouldn’t give him any more than a soft smile. “Um, well,” Herbert explained later, “different strokes for different folks.”

2 Here, John Crittenden refers to the African-American businessman Jabir Herbert Muhammad (1929-2008), who was the manager of Muhammad Ali.

Cecil B. Moore, the embattled Philadelphia lawyer who was suspended Friday as an officer of the National Assn. for the Advancement of Colored People, will move for a showdown Monday in the New York Supreme Court.
[…]
In a telephone interview from Philadelphia, Moore vowed that “thousands of my most militant followers” will march there to back his stand.
He also promised that there would be some kind of simultaneous demonstration at the convention site in Boston, but he declined to speculate on what form it may take.
“Let ’em guess,” he said. “We have different strokes for different folks.”

The phrase occurs—and is an underlying theme—in Everyday People (1968), by the Afro-American singer-songwriter Sly Stone (Sylvester Stewart – born 1943), originally sung by Sly and the Family Stone:

The butcher, the banker, the drummer and then
Makes no difference what group I’m in
I am everyday people, yeah yeah

The phrase occasionally occurs as different strokes for different people—as in the following from the account of a speech delivered at the American Orthopsychiatric Association, published in the Journal Herald (Dayton, Ohio) of Saturday 28th March 1970:

Dr. John F. Scott, director of the Worcester, Mass., Youth Guidance Center, said the “black lower-lower class male adolescent” has developed his own life style because he has no realistic escape.
[…]
Verbal ability he said is more highly regarded than physical prowess. The youth establishes his personality and reputation with language which signals his uniqueness, according to Scott.
Thus were born phrases such as “sugar-sugar” for affection, “whip it on me” for doing something, “hole in your soul” for not being with it, and “different strokes for different people” for individual differences.

Published in The Star-Phoenix (Saskatoon, Saskatchewan, Canada) of Tuesday 11th August 1970, this advertisement for the Saskatoon branch of Volkswagen parodied the phrase: 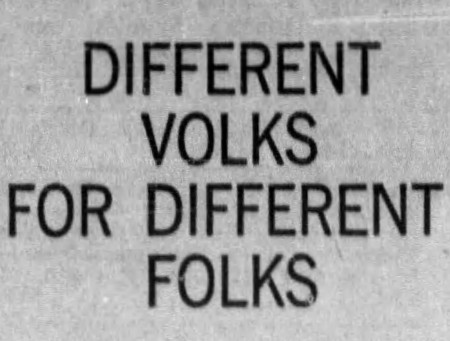