MEANING OF THE PHRASE

The phrase if you want to get ahead, get a hat means that one must wear a hat in order to become successful in one’s life or career—cf. also the story of the fedora.

This phrase is in usage in American, Australian, British and Irish English:

The fact is, people look better with a hat on—porkpie to pillbox. It is, and always has been, the finishing touch. […]
[…]
So if you want to get ahead, get a hat.

– In Australian English: This, for instance, is the beginning of an advertisement for Sassy, a millinery and accessories shop, published in The Sydney Morning Herald (Sydney, New South Wales) of Saturday 18th February 1995:

As the saying goes, if you want to get ahead, get a hat.

– In British and Irish English: For example, the following is from the account by Louise Hogan of the first day of the Cheltenham Festival, a British horse-racing festival—account published in the Irish Independent (Dublin, County Dublin, Ireland) of Wednesday 14th March 2007:

Towering above everybody else in the parade ring, billionaire businessman Michael Smurfit * showed that if you want to get ahead, wear a hat.

ORIGIN OF THE PHRASE

The phrase if you want to get ahead, get a hat was originally a slogan used by the British hat-manufacturers when hat-wearing began to decline—as explained in two articles published on Saturday 11th December 1948:

1-: In The Scotsman (Edinburgh, Midlothian, Scotland):

Worried Hatters
“If you want to get ahead—get a hat.” This call, we are promised, will become a familiar one in the very near future, for it will be read in our newspapers, periodicals, and on the screens of our cinemas. The exhortation had its first airing to-day at a meeting of the newly-formed Hatters’ Development Council, when a campaign to make men—especially the “under-25s”—more conscious of the value of headwear was launched.
Some 5,000,000 hats were sold last year in Britain, and one would think that the hatters would find this a satisfying turnover. Instead, they are worried. The “hatless brigade” has become an army. Members of the Development Council blame “the wave of informality” since 1918 for this, and also condemn the Government’s move in providing millions of Servicemen with hats.

Getting Ahead with a Hat
Although they made 5,000,000 hats for men last year the hatters of England are not happy. Four out of five men under 35 in some towns are unkindly indifferent to what a good hat can do for their appearance. The sad fact, as Mr. T. A. Moores, president of the British Felt Hat Manufacturers’ Federation, reported to-day, is that young men are just not “hat conscious.”
This state of affairs is not to be allowed to continue. The Hatters’ Information Centre, with offices in Denton and London among other places, was started to-day, and in the next two experimental years £50,000 will be spent on convincing the hatless of the error of their ways. They are to be confronted with the slogan “If you want to get ahead get a hat.” The value of a hat to their careers will be impressed upon them, and to show that hatters are not without an eye for romance the bare-headed will be informed that eight out of ten young women prefer men with hats.

And, indeed, the first two advertisements published in British newspapers at the beginning of 1949 “are not without an eye for romance”: the slogan “If you want to get ahead . . . GET A HAT!” is followed by “Ask your girl friend”; one of those advertisements depicts a young woman who, while walking with a bare-headed man, is ogling a smiling hatted man; the other depicts a bare-headed man looking morosely at a hatted man and a young woman walking together happily.

Here are those two advertisements, as published in The Coventry Evening Telegraph (Coventry, Warwickshire, England): 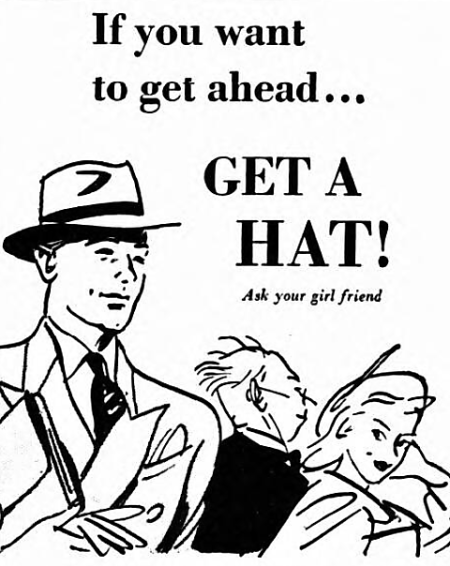 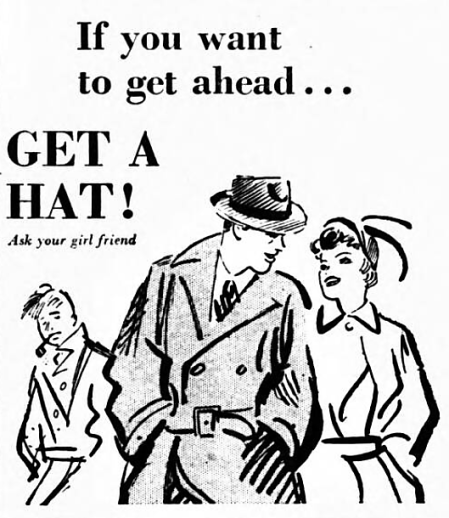 One Paul Murray coined a variant of the phrase if you want to get ahead, get a hat in Hats Off to the BOWLER!, an article about the centenary of the bowler hat, published in The Press and Journal (Aberdeen, Aberdeenshire, Scotland) of Thursday 12th October 1950:

In 1850, so the story runs, one William Coke, a relative of the Earl of Leicester, was disturbed by the regularity with which his top hat fell off in the hunting field.
History does not record the precise number of fox-killings at which Mr Coke failed to be present owing to the fugacity of his headgear. But it does record his resourcefulness.
Off he went to his London hatter with not only his tale of woe but a sketch of how, with his hatter’s help, he might anchor his headgear more firmly on his bouncing brow.
[…]
To-day, fittingly in the hundredth year of its hard-wearing existence, the bowler hat is making a limited and dignified come-back. […]
Now that the public is being made conscious of the suggestion, “If you want to get ahead, get a hat,” the time may be ripe to add another great truth: “If you want to get afield, get a bowler.”

At the end of 1948 and beginning of 1949, U.S. newspapers reported on the British hat-manufacturers’ advertising campaign—for example, The Daily Notes (Canonsburg, Pennsylvania) of Monday 27th December 1948:

The British Felt Hat Manufacturers Federation has raised a fund of $200,000 to be used for a two-year publicity campaign. Of the nation’s 24 million males, 40 per cent are going hatless. As a result, the hat-making factories which normally employ 10,500 workers now are able to hire only 7,400. The campaign slogan to be promoted with the $200,000 publicity fund will be: “If you want to get ahead, get a hat.”

Those reports introduced into American English the slogan if you want to get ahead, get a hat, which came to be used in U.S. advertisements such as this one, published in the Chattanooga Daily Times (Chattanooga, Tennessee) of Thursday 14th December 1950:

If You Want to Get Ahead,
Get a Hat for Christmas 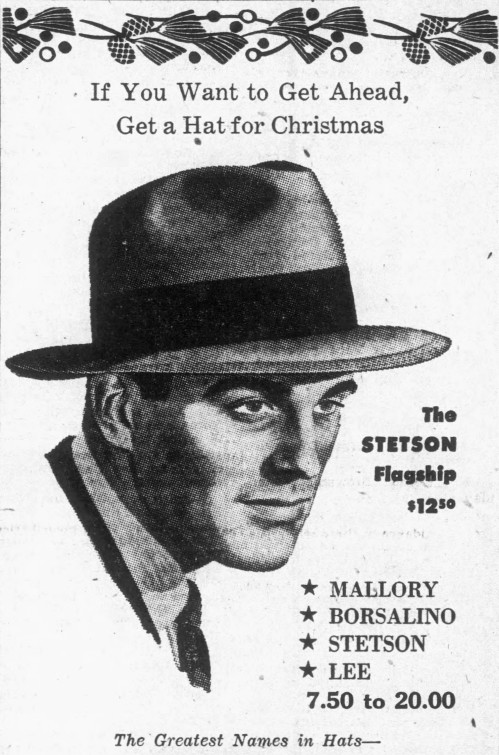 The Greatest Names in Hats—

Likewise, in Australia, the newspaper reports on the British hat-manufacturers’ publicity campaign popularised the slogan, which came to be used in advertisements such as the following, published in The Mercury (Hobart, Tasmania) of Thursday 6th January 1949:

“If you want to get ahead get a hat” –
Wear a Woodrow for supreme head comfort.

Read the following taken from a recent issue of “The Mercury”:

British hat manufacturers say their experts have discovered that eight out of 10 young women prefer their men to wear hats.
They are going to spend £50,000 sterling in an advertising campaign to convince the four out of five bareheaded young men that success in love lies in a new hat.
Their campaign slogan will be: “IF YOU WANT TO GET AHEAD GET A HAT,” and the drive to cover the pates of Britain will go on for two years.