The phrase Miss Otis regrets is recurrent in both British and American English. For example, this is what Linda McDermott, presenter at BBC Radio Merseyside, wrote in the Liverpool Echo (Liverpool, Merseyside, England) of Saturday 15th August 1992:

One of the dubious pleasures of occasionally presenting the early show for the hard of thinking on BBC Radio Merseyside (something of a change from my usual lunchtime slot) is that come my 8.30am handover to ‘Mrs Butler’s Eldest’, I am free to greet the day with a stroll around the city.
And the morning on the city’s streets is quite an education.
[…]
As I sat beside [a homeless man] briefly in the shade of a corporation privet in Paradise Street, my economic position was not that different from his on that particular morn’.
With the banks shut, the contents of my pocket—12p, a pair of nose hair clippers and a bent Soroptimists’ badge—would not suffice for a cup of tea.
[…]
[…] A voice asked: “My dear young lady. Could you spare 10p for a cup of tea!”
So I handed over all 12p, one pair of nose hair clippers and one bent badge.
Which explains why this particular Miss Otis regrets she was unable to lunch that day.

The allusion is to Miss Otis Regrets, by the U.S. songwriter Cole Porter (1891-1964). “The Bystanders” evoked this song in Standing By . . . A Weekly Commentary on One Thing and Another, published in The Bystander (London, England) of Tuesday 2nd October 1934:

Miss Otis Regrets
The nicest comic song we’ve heard for a long time comes from America. Somebody sang it to us at dinner the other night. We think it’s by Cole Porter. It is sung by a very solemn, dignified butler at the telephone, and begins:
Miss Otis regrets she’s unable to lunch to-day, Madam,
Miss Otis regrets she’s unable to lunch to-day;
She’s sorry she’s been delayed,
But down Lovers’ Lane she strayed, Madam;
Miss Otis regrets she’s unable to lunch to-day.
It turns out that Miss Otis has shot a gentleman in defence of her honour, has been arrested, has been lynched by a raging mob, and therefore cannot come to luncheon. The tune is a sort of dirge, with a little refined upward lilt at each “Madam” which makes it precious, and we think it’s a pretty good example of that sardonic and slightly sadistic humour you only find in America and in France.

The U.S. reporter and columnist Winifred Black (1863-1936) also mentioned the song in Now It’s the “Shotgun Widow”, published in several U.S. newspapers in November 1934—for example in the Evening State Journal (Lincoln, Nebraska) of Thursday the 29th:

The earliest mention of Cole Porter’s Miss Otis Regrets that I have found is from the account by Nancy Randolph (Inez Callaway Robb – 1900-1979) of the party that Elsa Maxwell 1 gave in the Perroquet suite of the Waldorf-Astoria, New York City, on Sunday 17th December 1933—account published in the Daily News (New York City, N.Y.) of Tuesday 19th December 1933:

The crowd shreiked [sic] over Cole Porter’s new song, “Miss Otis Regrets She is Unable to Lunch Today,” when Cole played and sang it with Elsa and Helen Broderick’s 2 assistance.

1 Elsa Maxwell (1883-1963) was a U.S. columnist, songwriter and professional hostess, famous for her lavish and animated parties that feted the high-society and entertainment personalities of her day.
2 Helen Broderick (1891-1959) was a U.S. film and stage actress.

The song became popular in the USA in 1934 from its being interpreted by various artists. Radio programmes published in U.S. newspapers indicate that Miss Otis Regrets was interpreted, for example:
– by Phil Harris’ Orchestra in March,
– by Gordon, Dave and Bunny in July,
– by Rudy Vallee’s Connecticut Yankees in July.

Likewise, the song became popular in Britain from its being interpreted—in particular—by the English comic singer Douglas Byng (1893-1987) in the revue Hi Diddle Diddle. Both the revue and Byng’s interpretation were first mentioned in Provincial Productions, published in The Stage (London, England) of Thursday 20th September 1934:

On Wednesday, September 12, 1934, at the Prince’s, Manchester, André Charlot produced the Walker-Nesbitt revue, “Hi Diddle Diddle,” prior to London presentation. […]
[…]
[…] A solo effort, “Miss Otis Regrets,” by Douglas Byng (with a telephone), does credit to its author, Cole Porter, as one of the humorous high spots.

The revue opened in London on Wednesday 3rd October 1934 at the Comedy Theatre. The following review, for example, is from Our London Letter, dated Thursday 4th October 1934, published in The Western Morning News and Devon and Exeter Daily Gazette (Plymouth, Devon, England) of Friday 5th October 1934:

“Hi! Diddle Diddle,” which Mr. Charlot launched last night at the Comedy Theatre, does not stand up very well. The first half contains far too many feeble sketches, but matters improve later on and there are several scenes that are well up to standard.
[…] Another good scene is a ditty by Cole Porter called “Miss Otis regrets,” to which Mr. Douglas Byng does ample justice.

The earliest transferred use of Miss Otis regrets that I have found is from this advertisement, published in the Bognor Regis Observer (Bognor Regis, Sussex, England) of Wednesday 12th December 1934:

MISS OTIS REGRETS
that she will not be at her Bridge, Theatre or Sewing Party to-night. She may be absent from her Spelling Bee.
She has lost her glasses, and with characteristic lack of vision (having no spare pair) she has lost her way.
Had she strayed into No. 5 High Street she would have learned of our rapid replacement service and all would have been well.
We have our own lens machinery on the premises. We could have helped Miss Otis—may we not help you.
Allisons=the Opticians
5, HIGH STREET, BOGNOR REGIS. Phone 144.
Opticians to the Royal Household, Craigwell; the House of Norfolk, Arundel Castle; and the leading County Schools and Families.

The second-earliest transferred use of Miss Otis regrets that I have found is from this advertisement, published in several British newspapers on Monday 24th December 1934—for example in The Lancashire Daily Post (Preston, Lancashire, England): 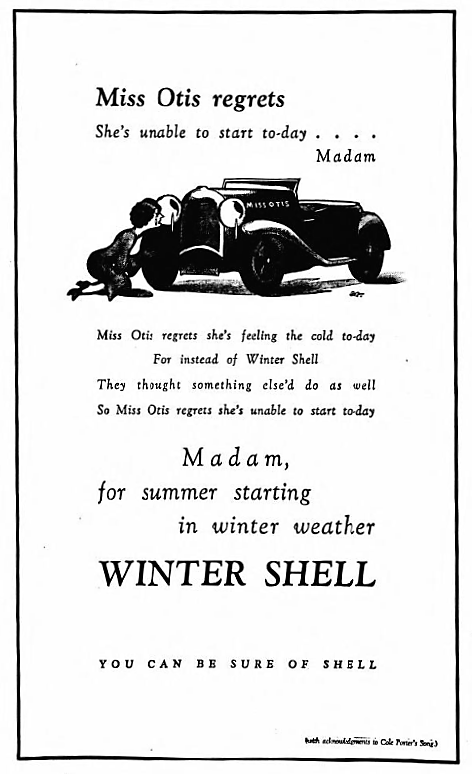 The phrase then occurs in the following obscure text, published in The Boston Daily Globe (Boston, Massachusetts) of Tuesday 8th January 1935:

Proposed Beer Drinking Bout of Crimson and Lampoon Suffers Blow
In just so many words, the following advertisement appeared in yesterday’s Harvard Crimson:
“Miss Otis regrets that on account of the dean’s ‘mad’; on account of Harvard’s fair White Ribbon is threatened; on account of Mr Wilbur Perkins of West Branch, Iowa, threatens not to send his boy to Harvard next year; on account of Messieur [sic] Dupont being worried, therefore, account the cannon fodder supply and threatening to reduce endowments, the Harvard Lampoon must lift its lovely head and cry: ‘There will be no beer-drinking contest after all.’”
Which means that the word has come out from University Hall by way of the grapevine that the proposed Crimson-Lampoon beer-drinking contest might better be forgotten.

MISS OTIS REGRETS
She’s Unable to WALK Today
But tomorrow she’ll be happy. She’s having her shoes CORRECTED to fit her feet at the Central. You, too, can walk without pain [&c.].

1-: On Saturday 12th January 1935, in an article about a hoax played on Jules Glaenzer, vice president of Cartier’s (someone had telegraphed in his name a hundred invitations to a fictitious party):

“Do you realize,” he asked in an aggrieved tone of voice, “that it cost me more than $50 to send out that batch of telegrams explaining the hoax?”
So this morning, it’s Mr. Glaenzer, not Miss Otis, who regrets——

Officially, the Duke of Windsor 3 is expected to receive an invitation to the coronation of his stand-in, George VI 4, on May 12. But unofficially, it is already understood—perhaps agreed is the better word—that the Duke, following in the footsteps of the fashionable Miss Otis, will regret.

An interesting use of the phrase occurs in the following from the Rushville Republican (Rushville, Indiana) of Saturday 1st April 1939:

London, April 1 (AP)—The little states of eastern Europe who have feared expanding Germany welcomed the new British foreign policy today in the hope they might get the same protection as that promised to Poland.
General relief was apparent both here and in the Balkans and other countries as a result of Premier Chamberlain’s 5 declaration to parliament yesterday—that Britain and France would fight “at once” beside Poland if she were attacked during negotiations for a broad anti-aggression understanding.
[…]
In London, […] the Daily Mail (conservative) commented that “the whole situation of policy deserves a far greater degree of clarification than was offered in the house of commons.”
The paper said the statement was “sketchy, and of necessity,” as it was only an interim offer, concluding that “Mr. Chamberlain—rather like the legendary Miss Otis—regrets he was unable to elaborate today. And today was Friday (the start of the English week end).”