This is the front page of the Daily Mail (London, England) of Tuesday 26th May 2020—Context: The British political strategist Dominic Cummings (born 1971), who has served as Chief Adviser to Boris Johnson 1 since July 2019, travelled to his parents’ farm in Durham during the COVID-19 pandemic lockdown: 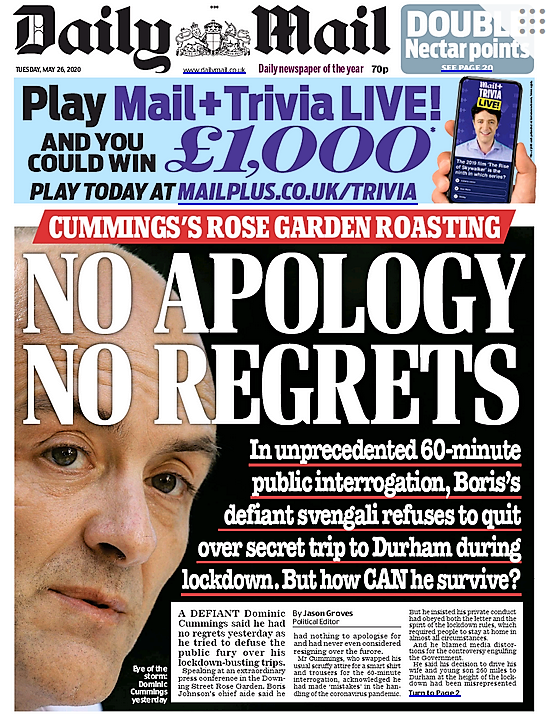 Boris’s defiant svengali refuses to quit over secret trip to Durham during lockdown.

1 The British politician, author and former journalist Boris Johnson (born 1964) has served as Prime Minister of the United Kingdom and leader of the Conservative Party since 2019.

The noun svengali, or Svengali, designates a person who exercises a controlling or mesmeric influence on another, frequently for some sinister purpose.

It originated in the name of Svengali, a musician who hypnotically controls Trilby’s stage singing in Trilby (1894), a novel by the French-born British novelist, cartoonist and illustrator George Du Maurier (1834-1896).
—Cf. also meaning and origin of ‘curate’s egg’.

The earliest transferred uses of Svengali that I have found are as follows, in chronological order:

Chief Little seems to be the Police Board’s Svengali.

2-: From Are Our Moral Standards Shifting?, by the U.S. historian Albert Bushnell Hart (1854-1943), published in The Forum (New York: The Forum Publishing Company) of January 1895—this passage had already been published in The Akron Beacon and Republican (Akron, Ohio) of Saturday 29th December 1894:

One of the evidences of a moral shifting is that so many people suppose that private and public affairs have two standards: that it is wrong to use an employer’s time for private gain, but right for a public officer to draw his salary and then leave the regular duties to a deputy; that it is wrong to secure a privilege for one’s self by bribing a city council, but right to subscribe money to a campaign fund to buy votes for a party’s advantage; or that a distinction may be made between the private and public character of public men. Americans seem rather more prone than formerly to consort with Thomas, Richard and Henry, if thereby they get aid or amusement. The leading idea of a book which is said recently to have sold a hundred thousand copies in the United States seems to be that, if you can contribute to the entertainment of people, they are to receive you and make you a friend, no matter what your character. The scoundrel Svengali is courted by three respectable Englishmen, and allowed to acquire a fatal influence over their protégée, because he can play a folding flageolet. Think of the Svengalis in American politics, perfectly well known to be consorts and partners of thieves and unjust persons, and yet accepted in political and even personal fellowship by honest men!

3-: From an article about the political plot that Bernard J. York instigated during a meeting of the Democratic General Committee of Kings County, New York, published in The Standard Union (Brooklyn, New York) of Tuesday 15th January 1895:

The bold McCarren 2 has been hypnotized by Svengali York 3, and acting the part of a Fourteenth ward “Trilby,” he stood up last night and sung [sic] his little piece about the beauties and benefits of Democratic harmony.

There appears to be no doubt that a majority of the Lexow Committee 4 has been thoroughly hypnotized by Svengali Platt 5.