The American-English phrase Where’s the beef? originated in a 1984 national television advertising campaign for the hamburger chain Wendy’s.

Michael Norman described the television advertisement in ‘Where’s the Beef?’ All Over Town, It Seems, published in The New York Times (New York City, N.Y.) of Saturday 11th February 1984:

The commercial, which ends a six-week national run on Monday but will appear in selected regions for a few weeks more, features three elderly women standing in front of a counter eyeing a huge hamburger bun and an absurdly small patty.
“It certainly is a big bun,” says the first woman.
“It’s a very big bun,” says the second.
“A big fluffy bun,” continues the first.
“It’s a very big fluffy bun,” the second agrees.
Then, the third woman, obviously impatient with this patter, demands an answer to a question that has turned into an instant punch line.
“Where’s the beef?” she snaps. “Where’s the beef? Hey, where’s the beef?”

Clara Peller, Elizabeth Shaw and Mildred Lane as the three elderly ladies at the Home of the Big Bun—photograph from ‘Where’s the Beef?’ All Over Town, It Seems, published in The New York Times (New York City, N.Y.) of Saturday 11th February 1984: 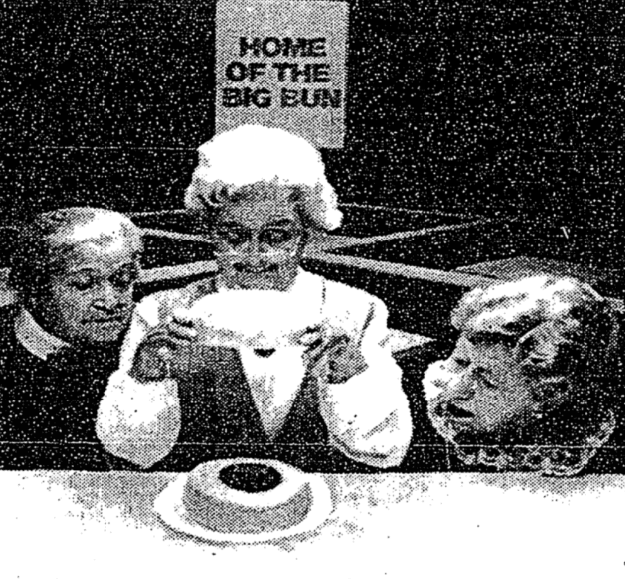 The Burger King Corporation plans to announce the latest challenge in its war with the McDonald’s Corporation on Monday: It will cut the price of its regular hamburger about 35 percent, to 39 cents, nationwide.
[…]
Wendy’s, the third-largest hamburger chain, says it will wait and see what happens. Wendy’s does not have a directly comparable product, so it is not taking part in this price competition.
But Wendy’s said it will announce a national campaign Monday that will ask: “Where’s the beef?” It will compare Wendy’s single burger with Burger King’s Whopper and McDonald’s Big Mac. “They have more bun, less meat and they cost more,” said Denny Lynch, a Wendy’s spokesman. “If they were discounting their large hamburgers, we’d be in the fray.”

This advertising campaign was not limited to television—as explained in Business Notes, published in The Tennessean (Nashville, Tennessee) of Sunday 15th January 1984:

Wendy’s International has launched an $8 million national television advertising campaign with a humorous twist urging consumers to examine the beef between the “fluffy” buns of the nation’s hamburgers.
Also it is giving out tiny magnifying glasses called “competitive meat detector” in connection with its “Where’s the beef” theme, while claiming to have 25% more beef in its single than its biggest competitor and 10% more than its second biggest competitor — while underpricing both.

Where’s the beef? immediately became an idiomatic phrase. The earliest occurrences that I have found are from ‘Miracle’ aiding next Flyer foe, published in The Journal Herald (Dayton, Ohio) of Tuesday 17th January 1984—the sportswriter Gary Nuhn used the phrase to characterise Dayton’s basketball team’s “non-beefy” lineup:

PHILADELPHIA — The man and the woman came late to Saturday’s Dayton-Missouri basketball game at the University of Dayton Arena. The second half was just beginning.
They took off their coats and sat down.
The second half was starting and Dayton’s players walked onto the floor — Ed Young, Roosevelt Chapman, Damon Goodwin, Larry Schellenberg and Sedric Toney.
The woman looked puzzled.
“Where’s the beef?” she asked.
Her escort shrugged his shoulders. He asked someone in front of him, “Uh, no offense, but where’s the beef?”
The woman repeated it quickly. “Where’s the beef?”
It wasn’t a commercial for Wendy’s Old Fashioned Hamburgers. It only seemed like it.
The Flyers’ most effective lineup lately has been this three-guard, two-forward, non-beefy variety and it wouldn’t be a surprise if that lineup found itself together again tonight at the Palestra as Dayton (6-6) meets Temple (10-1). Game time is 7 o’clock. Cheese is 20 cents extra.

That lineup did indeed find itself together again at the Palestra, as Gary Nuhn wrote in his account of Dayton’s victory over Temple, published the following day, Wednesday 18th January 1984, in the same newspaper:

The Flyers outfought Temple 31-22 on the boards despite playing the three-guard “Where’s the beef?” lineup all the way until the last 16 seconds.

On the same day, Wednesday 18th January 1984, in his account of Dayton’s victory over Temple, published in the Dayton Daily News (Dayton, Ohio), Gary Nuhn explained what this particular use of Where’s the beef? referred to:

As early as Tuesday 17th January 1984, in Mediocrity mars list of ’83 movies, published in the Dayton Daily News (Dayton, Ohio), Hal Lipper elaborated on the phrase:

“The Biggest Rip-off” goes to Smokey and the Bandit, Part 3 — a Bandit movie without the Bandit (Burt Reynolds). As the Wendy’s people would say, “Where’s the beef(cake)?”

The phrase was used in the caption to the following photograph, published in The Daily News (Lebanon, Pennsylvania) of Thursday 19th January 1984:

‘WHERE’S THE BEEF?’ this song sparrow might well be asking as it hopes to find an easy meal under Wednesday’s snow. The avian village is in a backyard in Lebanon’s north side.

In the above-quoted article ‘Where’s the Beef?’ All Over Town, It Seems, published in The New York Times (New York City, N.Y.) of Saturday 11th February 1984, Michael Norman evoked the popularity of the phrase:

All kidding aside, Clifford Freeman is just astounded. He started out to write a few clever lines that would sell some hamburgers, and now his jottings are grist for humor mills from the playground to the pulpit.
A copywriter for Dancer Fitzgerald Sample, a Manhattan-based advertising agency, Mr. Freeman is the author of a television commercial for the Wendy’s hamburger chain.
[…]
On the streets and in classrooms, libraries and restaurants, “Where’s the beef?” seems to be the latest idiom in the ever-changing language of popular culture.
“It’s really incredible,” said Mr. Freeman, a 40-year-old Manhattan resident. “Someone told me the other day a priest said it at a Roman Catholic mass. It’s become part of the American vernacular.”
The young seem especially taken with the line.
“Everyone goes around saying it,” said Paul Farina, a 14-year-old at the Glenfield School in Montclair, N.J. “It’s really popular. We think it’s funny the way the lady says it.”
Some quarters of society have been slow to embrace the whole thing.
Carl Golden, press secretary to Governor Kean of New Jersey, said that, in the contentious world of politics, the question is “not where’s the beef, but what’s the beef?”
The meaning of the line usually changes with the user.
For example, Terry Williams, an athlete and staff worker at City-As-School, a public high school in Manhattan, employs the line on the basketball court.
“If I’m playing against a real slim guy,” he said, “I’ll turn to him and say, ‘Hey, where’s the beef?’”
[…]
Michael Aaron Rockland, a professor of American studies at Rutgers University, is not surprised that television advertisements are a source of national humor.
“There’s a universal cheerfulness to commercials,” he said. “They’re upbeat. We turn to them for the lighter side of life.”

Interestingly, the phrase had occurred earlier, in the Austin American-Statesman (Austin, Texas) of Thursday 3rd November 1983:

Where’s the beef?
Main dishes boast less meat, more vegetables
By Kitty Crider
Special to the American-Statesman
Americans have awakened to the fact that meat is not a must for a meal. According to a United States Department of Agriculture report, the average dinner plate annually sees 38 pounds more vegetables, fruits and cereals than it did 10 years ago. And nutritionists are applauding, especially when the selections are fresh or frozen vegetables and whole grain cereals.