It is first recorded in a footnote to Some Notes on the Earl of Exeter’s Husbandry, published in Annals of Agriculture, and Other Useful Arts (Volume XXIX – London, 1797), edited by the English agriculturist Arthur Young (1741-1820):

In manuring, his Lordship compared two quarters an acre of rape-dust against two common dressings, the one of farm-yard dung, the other of lime; the soil a creech lime-stone.* […]
[…]
* A mixture of reddish loam with broken lime-stone, of various depths, upon a rock bottom.

The word rock bottom came to be used figuratively:
– in American English;
– either as a noun or as an adjective;
– with reference either to firmness or to the lowest possible, or most fundamental, level of something.

(Remark: I hyphenate rock and bottom when I write of them as forming a compound attributive adjective.)

Each of the three earliest figurative uses of rock-bottom that I have found:
– is from The Oregon Statesman (Salem, Oregon);
– is an attributive adjective meaning steadfast;
– qualifies a member of the Democratic Party.

Mr. H. H. Brown, member of the last Oregon legislature, from Jackson County, has taken the editorial charge of the Yreka (Cal.) Union. He is a good writer, a “rock bottom” democrat, and we predict that the Union, under his conduct, will be a good paper.

We noticed that the Statesman of last week classified Senator Elkins of this county with the Opposition.—Delusion.
You didn’t notice any such thing, you lying dog. Mr. Elkins is a democrat, a rock-bottom democrat; he’s neither yours or [sic] Lane’s “capital stock,” as you degradingly class your Linn county members.

Such a prodigy of political virtue and soundness can never have been anything but a “rock-bottom” democrat—can never have received a republican vote, and most assuredly never have cast one.

On Wednesday 24th July 1861, during a debate on the additional revenue bill at the House of Representatives, Justin Smith Morrill (1810-98), Representative from Vermont, used rock-bottom as an adjective meaning solid—as reported by The Congressional Globe: containing the debates and proceedings of the first session of the thirty-seventh Congress (Washington, D.C.) of Friday 26th July 1861:

“You may authorize a loan; but you cannot get capitalists to lend their money unless you give them satisfactory security. It is not the rate of interest you mean to pay that draws out capital, but it is the rock-bottom security that capitalists are going to be paid the interest punctually and their principal when due.”

In the following passage from Trusting to Rumor, published in the Weekly Union (Manchester, New Hampshire) of Tuesday 14th January 1862, the phrase on rock bottom means on firm ground, i.e., firmly supported by evidence:

It is not safe to call anything genuine news, in these times, until fully a week’s contradictions, qualifications, and siftings shall have brought it down to rest on rock bottom.

The earliest use that I have found of rock-bottom as an adjective meaning, of a price or cost, at the lowest possible level is from this advertisement, published in the St. Albans Daily Messenger (St. Albans, Vermont) of Wednesday 20th August 1864: 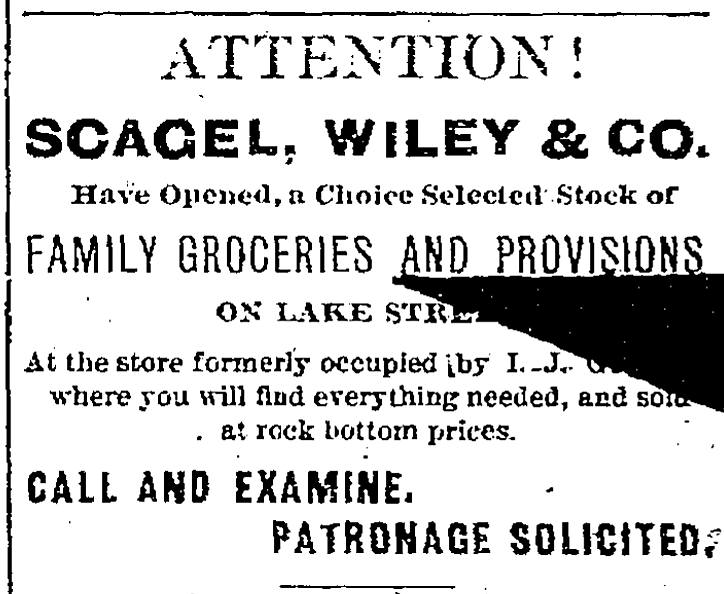 ATTENTION!
SCAGEL, WILEY & CO.
Have Opened, a Choice Selected Stock of
FAMILY GROCERIES AND PROVISIONS
ON LAKE STREET
At the store formerly occupied by I. J. [illegible]
where you will find everything needed, and sold
at rock bottom prices.
CALL AND EXAMINE.                          PATRONAGE SOLICITED.

The second-earliest that I have found of rock-bottom as an adjective meaning, of a price or cost, at the lowest possible level is from this advertisement, published in the Vermont Standard (Woodstock, Vermont) of Friday 8th September 1865:

I have found four early instances of the noun rock bottom:
– used in the economic domain;
– apparently denoting the lowest possible level;
– in the phrases to come right down, or to get down, to rock bottom, and to get a currency back to rock bottom;
– from the New-York Daily Tribune (New York City, N.Y.) – titled from 1866 to 1924 the New-York Tribune.

1: Thursday 23rd March 1865—so called with reference to the devices printed in green ink on the reverse of the original monetary notes, the colloquial noun greenback originally denoted a monetary note issued by the United States during and immediately after the Civil War, and not backed by gold or silver:

From The N. Y. Times of yesterday.
The Financial Panic.—The anticipated collapse of the Rebellion is producing its natural consequence, in the fall of gold. […] So sudden and serious a change in the recognized standard of value naturally produces confusion, failure and disaster in every department of business. […] What the country needs is such a gradual decline in the price of gold as will enable all branches of business, public and private, to adapt themselves gradually and safely to the necessities which it creates.
Comments by The Tribune.
We are among those who reluctantly bowed to the necessity of debasing our Currency in order to carry the country triumphantly through the perils and trials of a gigantic civil war. It is easy to show the evils and dangers of such a Currency […].
But we are utterly confounded by this clamor for persistence in insolvency one moment after the necessity therefor shall have ceased. That we shall not be able to return to Specie Payment while the War lasts, nor probably for some weeks thereafter—so much we comprehend; that our approximation to it will necessary be gradual, is clear enough; but that we should desire and endeavor to attenuate and prolong the process of restoration to solvency—that is quite too deep for us. […]
[…]
“But let the fall in prices be gradual,” it is urged. So it will be, we presume; but it were better not to be so. For the farmers of our country are to-day required to pay for labor prices which must subject them to serious loss—they making the crops of 1865 at Greenback prices and selling them at Gold prices. So those who would gladly build houses in cities are obliged to pay Greenback prices for labor and materials and sell or rent the houses, when completed, at Gold prices; and this deters thousands from building, as it ought. Journeymen and laborers say with reason, “We must have high wages, because everything is dear;” but this will not enable the house-owner to command corresponding rents next Fall or Spring—or will only effect this by reducing the erection of new tenements to a minimum. Is it not clear that coming right down to rock bottom would be best for all these?

2: Friday 20th October 1865—in an article about the construction of the Pacific Railroad:

New blood has lately been infused into this enterprise by an association of capitalists connected with Eastern roads looking for increased traffic therefrom; $1,000,000 was put in by them as a first installment. We hope soon to hear that the obstacles which have hitherto prevented the payment to this enterprise of the subsidy stipulated by act of Congress have been happily removed, and that the work is henceforth to be pushed forward with ample means and resolute energy. Let us once get our Currency back to rock-bottom, and we shall insist on the construction thenceforth of at least one mile per day of the main track of the Pacific Road till it is finished.

On behalf of the non-speculating Millions, we ask the Secretary and Congress to fund Greenbacks enough to force a virtual resumption of Specie Payment at a very early day. The forestallers will never be ready for it; the People always are and will be. We hope and trust that the Government, and every branch of it, will stand by the People. If Resumption knocks the pins from under a few high-flying Speculators, it must; but let us get down to rock-bottom at the earliest day. All healthful business and industry demand it.

4: Saturday 17th November 1866—like rock bottom, the noun hard pan has been used figuratively since the 19th century in the sense of the lowest possible level; the literal meaning of hard pan is similar to that of rock bottom, since it is a hard impervious layer of clay below the soil, resistant to drainage and root growth:

The country is said to be prosperous; yet almost every one is dissatisfied, and there are many portents of trouble at hand. The manufacturing class and the cities complain of extortion and dear food; the farmers respond that goods are dear and merchants and manufacturers wallowing in wealth. The capitalist says he cannot build or improve because labor and materials are so dear; the laborer retorts that living is so costly that, high as his wages are, he can scarcely get on. All but a very few realize that we are in a false position; each insists that we shall get out of it at the expense of somebody else.
The sky grows so squally that business is threatened with stagnation. Manufacturers are stopping their works because they can no longer place their goods; merchants are selling little in the present, and wish they had sold less in the past. The South has been glutted with costly fabrics which she does not need and cannot pay for; and protests on mercantile paper are uncomfortably plentiful. The eight Wall-street firms which regulate the price of gold, making it cheap when they have it to lend and dear when they choose to call it in, are at their wit’s end to keep up the premium, and would be utterly swamped if Secretary McCulloch would only buy up and extinguish some kind of Public Debt with his surplus gold. The Corn crop being large, the West is full of Hogs, and the great operators who manage the Pork market dare not buy and pack at the prices of last year, and are compelled to let the market settle, to their own heavy loss. Nobody wants to hold Butter and Cheese at current rates; Beef and Mutton, though still high, are falling, for Poultry is so cheap and abundant that the poor can’t afford to eat Beef. Our markets are glutted with produce and fabrics; and all know that, unless there shall be a fresh debauch of Paper Money, prices of nearly everything must be lower.
Now, then, is the time—if Congress and the Treasury could be induced to think so—to resume Specie Payments. Those who are not ready never will be. If a year and a half of peace, with an abundant Revenue and a diminishing Debt, have not sufficed for preparation, twenty years would not answer any better. In fact, there are to-day more debt and more pecuniary interest in the way of Resumption than there were in June, 1865. We shall never resume unless we try to; and whenever we really try we shall resume. And, since we are to have a season of declining prices and stagnant trade, why not resolve to go down to hard-pan at once? Let us resume—there is nothing wanting but the will—and have Specie prices for Labor, Produce and Goods. Then, thousands will invest in railroad-making, building, &c., &c., who are now deterred by the consideration that what costs $15,000 will be worth but $10,000 when we get down to rock-bottom, as we surely must and shall. Do let us descend from the clouds and stand once more on terra firma. If this was ever right, it is right generally, and is especially right now.