The phrase over a barrel means in a helpless position; at someone’s mercy.

This phrase is of American-English origin. The earliest instance in the Oxford English Dictionary (2nd edition, 1989) is from The Big Sleep (Alfred A. Knopf – New York, 1939), by the American detective novelist Raymond Thornton Chandler (1888-1959)—Chandler was punning on barrel in the sense (attested in the mid-17th century) of the discharging tube of a firearm:

“We keep a file on unidentified bullets nowadays. Some day you might use that gun again. Then you’d be over a barrel.”

But I have discovered that the phrase is in reality much older. The earliest occurrence that I have found is from The Seattle Post-Intelligencer (Seattle, Washington) of Friday 6th June 1890:

The trial of L. P. Coombs, the agent and ex-secretary of the relief committee, for forgery, which has been in progress before Judge Humes since Tuesday afternoon, resulted in a verdict of guilty by the jury within twenty minutes after retiring with the case.
[…]
A Post-Intelligencer reporeer [sic] called upon McCoombs in the county jail after he had heard the verdict. He appeared in his usual good spirits, and the conviction of forgery seemed to rest lightly upon his mind. He was not disposed to talk about the case. All he would say was: “They tried pretty hard to get me over a barrel up in court today, and I guess they half succeeded, but we will fool ’em yet.”

The second-earliest instance of the phrase that I have found is from the Tacoma Daily Ledger (Tacoma, Washington) of Sunday 18th January 1891—William H. Calkins (1842-94) was running against Watson C. Squire (1838-1926) for election to the U.S. Senate; I have not discovered the meaning of “as they did when the “P.-I.” said he was “bleeding freely””:

The Calkins people are very confident to-night and evidently feel that the fight is going their way. […] Squire has certainly lost his cheerful look and everybody is commenting on his depressed appearance. Billie O’Donnell, one of the representative business men of Seattle, who is here in his interest, says of him: “We have got the old man over a barrel.” This picturesque expression is supposed to mean that they are rolling the blood out of him, as they did when the “P.-I.” said he was “bleeding freely.”

In the following from The Helena Independent (Helena, Montana) of Thursday 10th December 1891, the author apparently refers to persons placed over a barrel before being hanged from a tree branch; however, over the barrel is in quotation marks, which might indicate a pun on the phrase in the sense in a helpless position:

Even the hieroglyphics of the Pharaohs do not carry more hidden mystery to the average tenderfoot than the figures 3-7-77. It is not altogether clear to him after he has been told that the symbols mean simply the vigilante warning to all suspicious characters to clear the camp. We have thus far failed to find an old timer who can tell just why these figures are used to convey the threat. It is certain, however, that they mean business for conviction came to the majority of the unbelieving when they were “over a barrel” with a rope dangling from a limb above.

In Talk of the Turf, published in The Morning Call (San Francisco, California) of Monday 18th April 1892, over a barrel is said to be “a racing phrase”:

To professional followers of the sport of Kings, several of the bookmakers (?) who have opened out in the business this week for the first time in their lives, have furnished considerable and profitable amusement. On many races some have chalked up “dutch” on losing books, i.e., by proportioning his play a backer could bet on every horse on the board so as to be a sure winner. This sort of thing, combined with Saturday’s hard luck, has put several of them, to use a racing phrase, completely “over a barrel.” It is thought that a least a third of the number will be compelled to stand down. Anyhow there is not enough betting here to give 13 bookmakers a chance of paying their expenses and getting a fair profit.

In my opinion, the phrase probably alludes to the practice of binding a person over an overturned barrel in order to beat them.

This practice was mentioned for example by The Knoxville Journal (Knoxville, Tennessee) of Thursday 14th November 1889:

Chattanooga, November 12.—The great sensation of the hour is the cruel beating of prisoners at the county work-house.
Your correspondent has examined the back of one man who was whipped by a negro guard—his back was black all over, the left shoulder being badly bruised, his eye blacked from a blow of a stick in the hands of a guard. He was first tied over a barrel so that his back would be exposed.

C. Ward also mentioned this form of punishment in Miners’ Stories. III.—An Experience with Judge Lynch, published in The Overland Monthly (San Francisco) of January 1890—the narrator has just been cleared of the theft for which the jury had previously sentenced him to death:

“The jury who had convicted me were unanimously voted to be cobbed [= beaten] over a barrel, but the sentence was never carried out, as they paid a heavy forfeit in treating the crowd.” 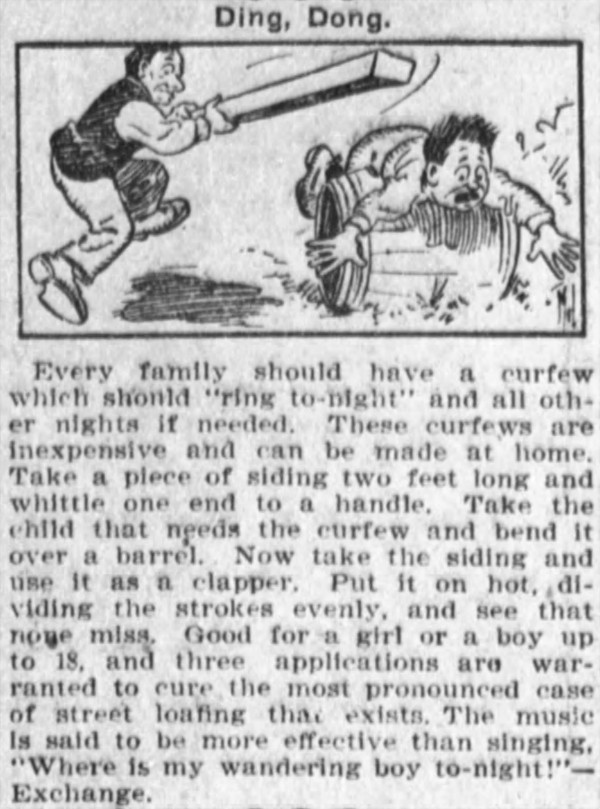 Every family should have a curfew which should “ring to-night” and all other nights if needed. These curfews are inexpensive and can be made at home. Take a piece of siding two feet long and whittle one end to a handle. Take the child that needs the curfew and bend it over a barrel. Now take the siding and use it as a clapper. Put it on hot, dividing the strokes evenly, and see that none miss. Good for a girl or a boy up to 18, and three applications are warranted to cure the most pronounced case of street loafing that exists. The music is said to be more effective than singing, “Where is my wandering boy to-night!”—Exchange.

The reference to the practice of binding a person over a barrel before beating them is more consistent with the meaning of over the barrel than is the explanation usually given, i.e., that the phrase alludes to the practice of rolling a person rescued from drowning over a barrel in order to clear the lungs of water. A phrase meaning at someone’s mercy more likely originated in a form of punishment than in the well-intended act of rescuing somebody.

The practice of rolling a person rescued from drowning over a barrel was mentioned for example in an article giving advice on “what to do in drownings”, published in The Morning News (Savannah, Georgia) of Monday 30th June 1890—contrary to what the author wrote, the practice had not “almost ceased”; it continued for many more years:

The barbarous practice of rolling the person over a barrel, or hanging him head downward, to permit the escape of water from the lungs, has almost ceased, in view of the fact, now generally known, that no water can get into the lungs.