The term dreaming spires is used allusively to refer to the city or university of Oxford.

It was coined by the English poet, essayist and social critic Matthew Arnold (1822-88) in Thyrsis, “a Monody, to commemorate the Author’s friend, Arthur Hugh Clough1, who died at Florence, 1861”, published in Macmillan’s Magazine (London) of April 1866—this is the beginning of the poem:

How changed is here each spot man makes or fills!
In the two Hinkseys nothing keeps the same;
The village-street its haunted mansion lacks,
And from the sign is gone Sibylla’s name,
And from the roofs the twisted chimney-stacks.
Are ye too changed, ye hills?
See, ’tis no foot of unfamiliar men
To-night from Oxford up your pathway strays!
Here came I often, often, in old days;
Thyrsis and I; we still had Thyrsis then.

Runs it not here, the track by Childsworth Farm,
Up past the wood, to where the elm-tree crowns
The hill behind whose ridge the sunset flames?
The Signal-Elm, that looks on Ilsley Downs,
The Vale, the three lone wears, the youthful Thames?—
This winter-eve is warm,
Humid the air; leafless, yet soft as spring,
The tender purple spray on copse and briers;
And that sweet City with her dreaming spires
She needs not June for beauty’s heightening,

The earliest allusive use of dreaming spires that I have found is from The Manchester Guardian (Manchester, Lancashire) of Friday 7th July 1876, in an article about the question put to the Council of Owens College, Manchester, by the Senate, “Ought the College be constituted a University?”:

The very word “University” in connection with Manchester will perhaps excite a smile amongst people who know little of our inner life, and who are content to judge a population of three or four millions by some current commonplaces and to limit the possibilities of its development to the various modifications of one staple product. There are others who, while recognising in Manchester something more than an emporium of cotton, and conscious that in the great population which surrounds it are to be found the elements of an intellectual life not less eager and effective than its industrial life, are yet of opinion that Learning can find no proper seat beyond her accustomed homes, that the atmosphere of antiquity is needed for her proper cultivation, and that there would be peril in placing on one level the dreaming spires by the Isis2 and the brand new building in Oxford-street3.

2 Isis: a name for the part of the River Thames that flows through Oxford
3 Owens College is bounded by Oxford Street, Burlington Street, Lloyd Street and Coupland Street.

The phrase the, or that, (sweet) city of (the) dreaming spires became an established appellation for the city of Oxford; it apparently originated in misquotations of Thyrsis, as in this passage from Through the Cotentin, published in The Globe (London) of Friday 22nd August 1879:

Seen across the wide intervening plain, the appearance of Caen was that almost of Oxford as viewed across Christ Church meadows, or, indeed, regarded from the hills leading up to Bagley. Caen possesses more numerous and more beautiful spires than any other town of northern France, and its ecclesiastical architecture generally is very noble. Here was, then, in the distance another—
“Sweet city of the dreaming spires.”

The following image and legend are from The Illustrated London News (London) of Saturday 28th January 1922: 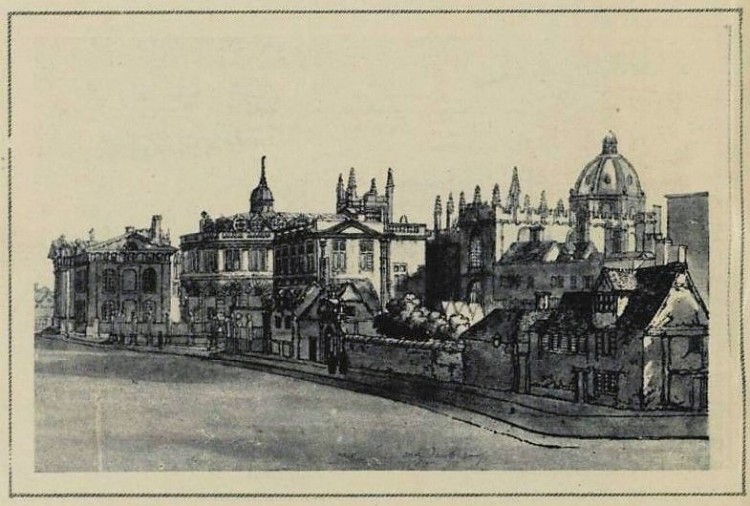 The “sweet city of the dreaming spires” in the eighteenth century: Joseph Farington’s drawing of Broad Street, Oxford.

The term dreaming spires occasionally refers to the universities of Oxford and Cambridge regarded together (i.e. to Oxbridge); this advertisement for The Sunday Times (London) was published in the Daily Herald (London) of Saturday 21st October 1961:

Dreaming spires . . . and disillusionment. This is the depressing picture of life at Britain’s older universities—as painted by present-generation undergraduates who have been given a page (and carte blanche) in The Sunday Times this weekend.

The term dreaming spires has come to also denote the sheltered condition of unworldly academics; the earliest instance of this usage that I have found is from The Herald: The National Labour Weekly (London) of Saturday 4th September 1915:

A writer in the new number of the Church Socialist, which is up to the usual interesting standard, says there are always those who will picture University life as a matter of “dreaming spires” and cloistered seclusion. Would it were true. Having looked at sundry pronouncements of University professors on the war, we could devoutly wish them unbroken dreaming and eternal seclusion.