The noun crow’s nest denotes a barrel or cylindrical box fixed at the masthead of a vessel, as a place for a lookout to stand.

The crow’s nest was so called because of its shape and position at the top of the mast, and because its purpose was to accommodate a watchman.

The name has also been applied to similar structures; for example, the following is the beginning of an article titled The Crow’s Nest, published in the Hereford Journal (Hereford, Herefordshire) of Wednesday 17th January 1849:

Such was the name given to a cage-like erection on the very summit of the cross of St. Paul’s Cathedral, London, placed there for the purpose of making an engineering survey of the metropolis and surrounding country, and only recently taken down.

According to the earliest instances of the word crow’s nest in its nautical sense, the contrivance was specifically invented for use on whaling ships, apparently in the early 19th century.

The English Arctic explorer and scientist William Scoresby Junior (1789-1857) attributed this invention to his father, the Arctic whaler William Scoresby Senior (1760-1829), in Explanation of some of the technical terms made use of in the foregoing Journal, appended to Journal of a voyage to the northern whale-fishery; including researches and discoveries on the eastern coast of West Greenland, made in the summer of 1822, in the ship Baffin of Liverpool (Edinburgh, 1823):

Crow’s Nest.—A circular box, like a small pulpit, fixed at the mast-head, for the accommodation of the captain or officer, when employed in navigating the ship through ice, or looking out for whales. This structure, which is extremely commodious, was the invention of Captain Scoresby senior, and is now universally used by the northern whalers.

In Tales of a voyager to the Arctic Ocean (volume 2 – London, 1826), the Scottish author and translator of German writings Robert Pearse Gillies (1788-1858) described more precisely the crow’s nest, also attributed its invention to William Scoresby Senior, and suggested improvements to alleviate the lookout’s suffering:

I […] sallied forth upon deck, to view the setting up of the “crow’s nest.”
This nidification was accomplished by fixing an open barrel to the main top-gallant- mast head, through the bottom of which a trap-door opens upon a staircase, I mean a ladder of ropes, with wooden bars for steps, instead of ratlins [= ratlines]. This is, I am told, the invention of “old Scoresby,” or Captain Scoresby, sen., as renowned for skill in Greenland fishery, and its mysteries, as Robin Hood may have been for craft of buck-shooting, or Rob Roy for levying “black mail.” Not but that I believe the old Dutch whalefishers used to build some sort of nest, after their own fashion, made up of hoops and leather, and of proper dimensions for containing their vast persons, (probably for want of barrels of sufficient size); but the glory of adopting a trim and seaman-like contrivance, instead of an immense bower of hides and arches, belongs to the father of whale slaughter aforesaid.
The crow’s nest is an erie [= eyrie], or watch-tower, from whence the movements of the fishes are to be espied; and, when in fishing ground, a harpooner is constantly stationed in it. His “spell,” or turn, lasts from two to four hours, often whilst the temperature is several degrees below zero, and yet it never seems to have entered into the councils of Greenlandmen, that a covering to the barrel would be an improvement. It will be objected, immediately, that a head to the crow’s nest would prevent that freedom of looking around, which is the continual duty of the watchman, but a moveable hood, which would revolve readily on the rim of the cask, would sufficiently provide for this necessity, and if only a circular portion of the covering was made to slide round, as a pivot of rest for the telescope, that would be amply sufficient. By this addition to his nest, the harpooner would be defended from the severe and biting frost, which sometimes deadens his fingers and his nose, and which, when assisted by the keen lash of a stiff breeze, is scarcely tolerable. I have often wondered to see a poor fellow sit, congealing and bleaching for hours together, at the mast head, during a gale which has raised blisters upon the faces of his comrades upon deck, where it is comparatively warm; while only the precaution of a piece of tarpaulin, raised up at his back, to meet the blast, would have saved him from several degrees of cold. But the general race of Greenland fishers partake much of the stolidity and blindness to their own welfare, which is so conspicuous in the animals they pursue. 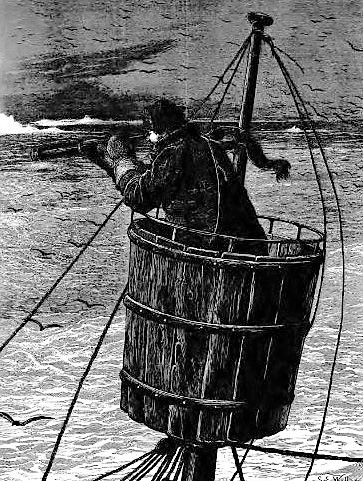 Bellot was then under the command of the Canadian Arctic explorer William Kennedy (1814-90) during the second voyage of the Prince Albert in search of the English Royal Navy officer and Arctic explorer John Franklin (1786-1847), who had departed England in 1845.

Curiously, in Bellot’s journal, nid de pie appears explicitly as a rendering of the English term crow’s nest. The author also believes that in the French term, pie (magpie) refers derisively to the babillage (babbling) of the ice master (the pilot who navigates the ship in icy waterways), who, from the crow’s nest, keeps warning the crew about dangers and commands the manoeuvre.

So-called ‘etymologists’ assert that crow’s nest originally referred to real crows, because they absurdly claim that the phrase as the crow flies (meaning in a straight, direct line) originated in a practice of early navigation at sea.