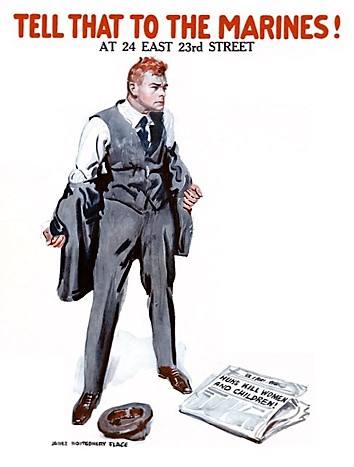 “HUNS KILL WOMEN AND CHILDREN!”
“TELL THAT TO THE MARINES!”

This poster, which attracted a great deal of attention, portrays an angry-looking young man in the act of pulling off his coat as though he were anxious to get into a fight. The headline of the newspaper lying on the ground reads: “HUNS KILL WOMEN AND CHILDREN!” The caption of the poster is: “TELL THAT TO THE MARINES!” This created or popularised in the USA a positive connotation in the use of tell that to the marines.

The phrase tell that to the marines is a scornful expression of disbelief. In A Concise Dictionary of Phrase and Fable (1993), B. A. Phythian explained:

Marines were originally soldiers raised for sea-service (originally in the seventeenth century) and trained for maritime warfare. As such they were looked down on by sailors, who saw themselves as skilled members of a senior service; in fact, soldiers at that time were not highly regarded by anyone. The phrase originated in naval circles with the implication that marines were ignorant enough to believe anything.

This phrase was originally he may tell that to the marines, but the sailors will not believe him, and variants. It is first recorded in The Post-Captain; or, The wooden walls well manned; comprehending a view of naval society and manners (London, 1808), a comic novel of British naval life by John Davies (1774-1854), who had been pressed into the British Navy in 1793 and served until 1797. The author made a frequent use of the phrase; for example:

The captain and his lieutenant now walked up and down the quarter-deck.
[…]
“If the wife was old and ugly, they should descend into the gun-room; but, as she is young and pretty, I will keep them aloft.”
“Is not Flora, sir, a French name?”
“Yes it is; it is Creole French.”
“But the lady, sir, is English. Her husband at least said so.”
“He may tell that to the marines, but the sailors will not believe him.”
[…]
“It was a great sacrifice in so young a girl, to get spliced to so old a man.”
“Yet, sir, she says she loves him dearly.”
“Avast there! She may tell the marines that; but the sailors will not believe it.”

The English poet George Gordon Noel Byron (1788-1824) used and explained the shorter form of the phrase in The Island, or Christian and his Comrades (London, 1823):

The English author and publisher John Camden Hotten (1832-73) also explained the phrase in A Dictionary of Modern Slang, Cant, and Vulgar Words (London, 1860):

Horse marine, an awkward person. In ancient times the “jollies” or Royal Marines, were the butts of the sailors, from their ignorance of seamanship. “Tell that to the marines, the blue jackets won’t believe it!” was a common rejoinder to a “stiff yarn.” Now-a-days they are deservedly appreciated as the finest regiment in the service. A horse marine (an impossibility) was used to denote one more awkward still.

William Price Drury (1861-1949), then a captain in the Royal Marines, perpetrated a hoax in the preface to The Petrified Eye, and other Naval Stories (London, 1896). He related a tale which he presented as a recently discovered entry in the diary of the English naval administrator Samuel Pepys (1633-1703). In Tell That (It) to the Marines, published in American Speech (December 1961), Albert F. Moe explained that, apparently, Drury

was motivated by a desire to negative the slur and to cancel out the aspersion which he considered to be cast upon his beloved Marines by the gullibility connotation contained in tell that (it) to the marines.

Moe then gave Drury’s story almost in its entirety:

The time of the Saying was towards eleven of the clock on an autumn morning in the year of Our Lord one thousand six hundred and sixty-four, and the place—the Green Park of Saint James.
The wherefore you shall hereinafter learn.
It so befell that His lighthearted Majesty Charles the Second, with an exceedingly bored expression upon his swarthy face, was strolling in the shade with the ingenious Mr. Samuel Pepys, Secretary to the Admiralty […]
‘Talking of the fleet, Sire,’ continued Mr. Pepys, mindful of his master’s hint, yet unable to abandon entirely the subject nearest his heart, ‘I had speech yestere’en at Depford with the Captain of the “Defyance,” who hath but lately returned from the Indies, and who told me the most wonderful things that ever, I think, I did hear in my life […]’
‘And secondly,’ he continued, ‘whiles the ship did sail in southern latitudes, shoals of fish were daily met with flying in the air!’
The Merry Monarch laughed. ‘Now do I begin to perceive, Mr. Pepys,’ said he, ‘that this captain of thine possesses a very pretty wit. Fish flying in the air! Ha! ha! a quaint conceit, which ’twere too good to spoil wi’ keeping! What ho! Sir’—he turned and beckoned the Colonel of the newly raised Maritime Regiment of Foot, who was following in close conversation with the Duke of York—‘We would discourse with you on a matter touching your own element. What say you, Colonel, to a man who swears he hath seen fishes flying in the air?’
‘I should say, Sire,’ returned the sea soldier simply, ‘that the man hath sailed in southern seas. For, when your Majesty’s business carried me thither of late, I did frequently observe more flying fish in one hour than the hairs of my head in number.’
Old Rowley glanced narrowly at the Colonel’s frank, weather-beaten face. Then with a laugh he turned to the Secretary.
‘Mr. Pepys,’ said he, ‘from the very nature of their calling no class of Our subjects can have so wide a knowledge of seas and lands as the officers and men of Our loyal Maritime Regiment. Henceforward, ere ever we cast doubts upon a tale that lacketh likelihood, we will first tell it to the Marines!’

Although Drury cited no source for the story and provided no corroboration for it, his fanciful tale was widely accepted as truthful, repeated, paraphrased and improved on even after he had admitted it was a hoax in the Marine Corps Gazette, number 1, 1931, in answer to a query from Brigadier General George Richards, of the United States Marine Corps:

The letter from Brig. Gen. Richards, of the U.S.A. Marines, has given me much amusement and not a little remorse. The story ‘Tell It to the Marines’ which he quotes so seriously is taken from the preface to my earliest literary crime ‘The Petrified Eye,’ and is a leg-pull of my youth of which I have grown a little ashamed. I seemed to have forged the style of Samuel Pepys so successfully that many besides our distinguished American comrade have wasted time in hunting through the diary to verify my statement. For it simply does not exist, being no more than a fabrication of my own mischievous brain.

For many years in the USA, the tale was reprinted in quasi-official service publications, which created the impression that it had received an official endorsement. Additionally, as Albert F. Moe explained in the above-mentioned article, about Marine Corps Lore, Marine Corps Historical Reference Series (1960):

The Marine Corps Headquarters has not only classified Drury’s hoax as a ‘shining truth,’ but has arrogated the British hoax, intended for British consumption, to the Corps as a part of its own tradition, when it should have denied that there was any relevancy.