In British English, the noun Mallaby-Deeley has been informally used to denote:
– a cheap suit of clothes;
– a (cut-price) tailoring business, or its proprietor.

The reference is to Harry Mallaby-Deeley (1863-1937), a Member of Parliament who opened a cut-price tailoring business in 1920.

For example, the following is from Today’s Star Question, published in the Evening Post (Nottingham, Nottinghamshire, England) of Friday 25th August 1972:

GRAMPUS—During the 1920’s I remember purchasing a rather smart ready-made suit. Such clothes were quite the fashion at the time and had rather a peculiar name. Is it possible that you could jog my memory?
We wonder if you are referring to “Mallaby-Deeleys?” This was a popular term for ‘off the peg’ clothes and suits; after Sir H. Mallaby-Deeley (1863-1937), who founded a firm for making cheap well-cut ‘ready-mades’ after World War I. The venture ended in failure.

Harry Mallaby-Deeley’s scheme was announced in several British newspapers on Friday 27th February 1920—for example in the Daily News (London and Manchester, England):

To-day an opportunity is afforded the public of purchasing high-class clothes at prices that will place them within reach of modest purses. It is an experiment by Mr. Mallaby-Deeley, M.P., who believes that the present high prices are unnecessary.
A shop at 112, Strand, will open to-day, and lounge suits made to measure may be had from £2 17s. 6d. to £4 17s. 6d. and overcoats at £3 18s. 6d. Full details of the scheme will be found in another column *.
Mr. Mallaby-Deeley, in conversation with a “Daily News” representative last night, said he was hopeful that the public would realise the benefit which would accrue to themselves and the country generally by his scheme. “I am certain,” he said, “that the present high prices are absolutely unnecessary and cannot be justified, and I am trying to prove it. This scheme is simply a lesson in ‘mass production,’ enabling the public to have the first benefit instead of a ring or combine. As a public man, I realise the dangers of the vicious circle now existing.
“I have spared myself no trouble in assuring myself that every detail of the scheme is as complete as possible. For the past three months, I have worked incessantly at it, and have no hesitation in saying that the prices I am asking compare favourably with those of any shop in the world. Everything now depends upon public support; and even if I fail, I shall know that I have, at great cost, done all in my power for the public’s benefit.”
Samples of the cloth will be sent on application to those living in the provinces.

[* This refers to an open letter in which Harry Mallaby-Deeley explained to the public why he chose to open his cut-price tailoring business, and gave a detailed price list.]

This photograph of the crowd outside Harry Mallaby-Deeley’s shop in the Strand was published in The Sphere (London, England) of Saturday 13th March 1920:

The earliest occurrences that I have found of the noun Mallaby-Deeley denoting a cheap suit of clothes, or a (cut-price) tailoring business or its proprietor, are as follows, in chronological order:

1-: From This Morning’s Gossip. Chat on Men, Women, and Current Affairs, by ‘Paul Pry’, published in The Leeds Mercury (Leeds, Yorkshire, England) of Monday 8th March 1920:

No Tailors There.
Back from another big game expedition, Lord Dewar tells many stories of the inhabitants of the interior of Central Africa. He has come upon natives living in a primitive state who disdain the wearing of clothes. Not so primitive, perhaps, if they’ve no Mallaby-Deeley.

2-: From the caption to the following cartoon by the British artist George Loraine Stampa (1875-1951), published in Punch, or the London Charivari (London, England) of Wednesday 10th March 1920: 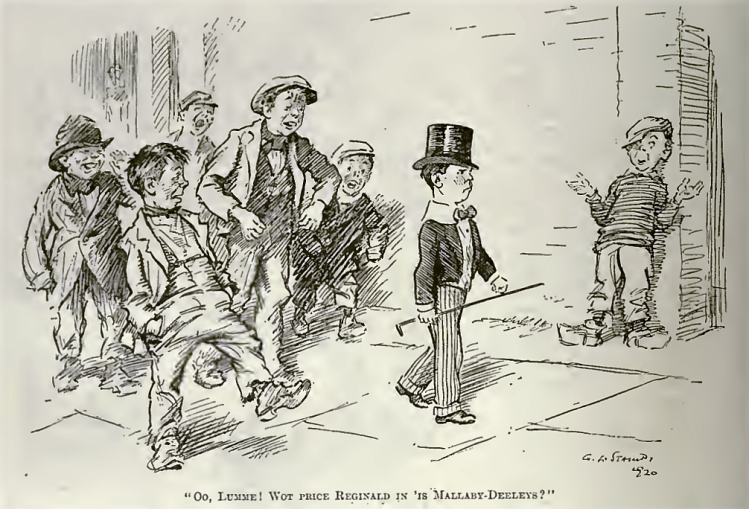 3-: From the Nottingham Journal and Express (Nottingham, Nottinghamshire, England) of Monday 15th March 1920:

A MALLABY-DEELEY FOR WOMEN?
By Marguerite Cody.

Many women are saying they wish some enterprising man would start a Mallaby-Deeley shop for women. Speaking personally, however, I would not care to predict much success for such a venture. The habit of competition in dress is too highly developed in the average woman. Mrs. A, of Wandsworth, would not care to run the risk of always meeting Mrs. B, of Putney, dressed for her shopping expedition in a costume of the same style and cut as her own.
I suppose women as a sex spend hundreds a year more on dress than men. But half of them, poor things, cannot help it. They are the victims of the most vicious and senseless circle of all, the circle of fashion.

CLASSES FOR LOVERS.
Experiment that Might be Extended.
By R. B. INCE.

THE perils of marriage have so impressed the Rev. H. L. Marsh, Vicar of Mansfield, that he is contemplating the establishment of classes of instruction for lovers.
“I do not know if we should get many to attend,” he told a representative of the Press, “but I think some instruction is necessary on marriage, for there are young people who seem to know hardly anything on the subject.”
The vicar is right.
What we need above all things in these troublous days is instruction. Children are taught to behave but they don’t always benefit by the instructions received. They frequently need continuation classes after they are grown up.
Only the other day I met an old child of eighty who called me by the most familiar names—and none of them the ones I received at baptism. Instead he called me by a great many other names that would have shocked my godfathers and godmothers—the kind the printers won’t print, using instead dots and dashes; and merely because, happening to glance the other way when passing, I collided with his portly person.
Obviously he needed instruction.
A week in the vicar’s class would, I have no doubt, have turned him into a cherub. At the end of a fortnight, wings would have been budding at the back of his Mallaby-Deeleys.

5-: From Bystander Comments, published in The Bystander (London, England) of Wednesday 24th March 1920:

Political Mallaby-Deeleys
So we are to have a new political suit of clothes. Well, we want one badly enough. A Paisley shawl and a divided ulster are hardly a sufficient garb for the average Briton. But whoever is to be our political Mallaby-Deeley, whether it be Mr. Lloyd George or someone else, he must give us a thoroughly good material, one that we like the look of and that will wear. I suppose we shall have, for the most part, the same old tailors and cutters, but we must have a good new cloth. We shall want it in the weather ahead of us. An old stuff made up a little differently, another button here and a strap off there, will not do. Nor will a shoddy made by pulping a lot of the old materials together—which, I believe, is the way shoddy is made. We want a good cloth, “all wool and a yard wide,” and we shall know it when it is shown to us. Moreover, it must be suitable for “ladies’ wear.” The man who puts this stuff, and no other, in his window will get the big queue outside his doors.