Of American-English origin, the phrase pig in a python, and its variants, designate:
– the people who were born during the ‘baby boom’ of the years immediately following the Second World War (1939-45), considered as a demographic bulge;
– any short-term increase or notably large group.

I have found an early use of the phrase pig in a python in Tom Wolfe: limp-haired, white suited renegade cowboy, by Herbert Aronoff, published in The Gazette (Montreal, Quebec, Canada) of Saturday 31st January 1970:

YOUTH WILL GROW OLD his words screamed across the wide expanses of McGill’s Leacock Auditorium and sideburns bristled on all sides.
Like a pig in a python, the youth bulge will work its way from front to back, living to see the tail end of life, condemned in its old age to wag the head of society with outmoded ideas of peace and love.

WASHINGTON, Nov. 5—Perhaps the most important future implication of the news that the American birth rate is dropping significantly is what might be called population peristalsis. In biology, peristalsis is what happens when a pig is eaten by a python. The bulge moves gradually along the length of the snake until it is fully digested. Lower birth rates, if they continue, would result in something exactly parallel. And population peristalsis, in turn, could cause continuing and considerable changes in American society for the next half century.
The big bulge in this case consists of some 74 million Americans who are now 23 years old at the oldest and 4 or 5 at the youngest. These are the young people born in the postwar baby boom. On a graph of the entire population by age, this group sticks out like the python’s dinner.

The following drawing illustrates New Census Trend: Bulging Generation, published in The New York Times (New York City, New York, USA) of Saturday 6th November 1971—in this graph of the U.S. population by age, in the form of a python’s body, the bulge near the python’s head corresponds to the people aged between 5 and 23: 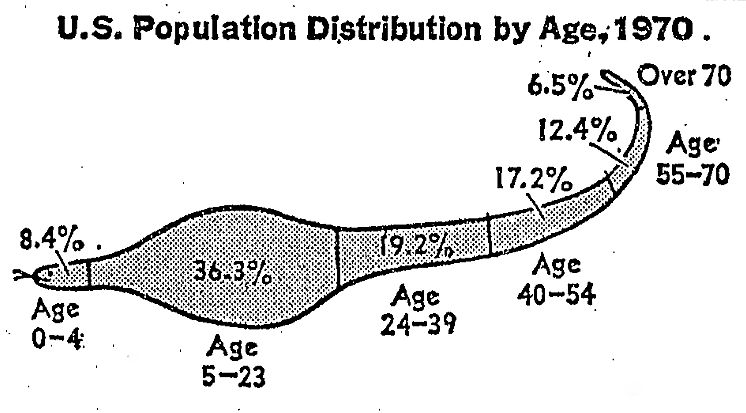 The phrase pig in a python then occurs in the following texts:

The chief difficulty arises from the existence of a very large body of people who are now under 30. Most of these people are not going to go away over the next 30 years. They are simply going to get older. If they do not reproduce significantly, we will become a country, first, of the middle‐aged and then of the old.
The existence of this disproportionate bulge in the population created the famous youth culture of the nineteen-sixties when merchandisers discovered that half the population was under age 28 and had money to burn. As they age they will become an even richer market, and we may anticipate that merchandisers will gradually accommodate to it by replacing the already faded youth culture with, first, a middle‐aged culture and, finally, a graybeard culture.
All very well for the bulge group, you may say. It will continue to dominate society as it passes through the decades like a pig through a python.

There are so many of the maturing post-World War II generation. If drawn to scale on a population graph, they would make a lump like a pig in a python.

3-: From The age of consent, an editorial published in The Gazette (Montreal, Quebec, Canada) of Wednesday 1st November 1978:

It was Jacques Couture, the provincial immigration iminister [sic], who let the kitten out of the bag last Friday by saying, “We’re going to lower the voting age to 16 from 18.” […]
[…]
Lowering the voting age from 21 to 18 […] has not brought out that age group in heavy numbers, nor has it swayed elections. With the Sixties teenage bulge moving on through the population—like a pig through a python as one wit puts it—there is neither excuse nor need for lowering the voting age now.

A San Joaquin Valley economist […] Katy Tyree of American National Bank, Bakersfield, […] told the Rotary luncheon that Tulare County’s complexion will change as the area grows.
With a declining birth rate, the “baby boom” people, now between 25 and 35 years old, will remain the dominant population group as they age.
“It will be like a pig in a python,” she said. “The lump will continue to go through.”

The earliest use that I have found of pig in a python in the sense of any short-term increase or notably large group is from an account of the Infield Fest that took place during the 106th Preakness Stakes, in Baltimore, Maryland, USA—account by Susan Reimer, published in The Sun (Baltimore, Maryland, USA) of Sunday 17th May 1981:

The makeshift ticket booths and the portable turnstiles are in place. Sort of like giant tonsils in front of the tunnel that leads to the Pimlico infield. A security guard surveys the mass of humanity straining at the gates and shouts: “Okay, we’re ready for ’em. Let’s go.”
The main gates swing open, and the first wave washes up against the turnstiles. Unencumbered by coolers or blankets, this group has clearly been instructed to race to the virgin infield grass and claim a good spot. They pay their $7, $2 more than last year, and speed through the tunnel.
The next wave moves through the turnstiles like a pig through a python. You’d swear they were moving in. And they bring with them all manner of carts, wagons, dollies, scaffolding, blankets, tarps, tents, poles, kegs, bags of ice, cases of beer. If armies do travel on their stomachs, this one could make it to Afghanistan on foot.