The British-Army slang expression Noddy suit denotes a suit of protective clothing, including gloves, overshoes, etc., issued for use in nuclear, biological or chemical attacks and intended for use with a protective mask.

By extension—cf., below, quotation 4—the expression Noddy suit also denotes a suit of protective clothing for use by agricultural employees working with chemical sprays.

The first element of this expression, Noddy, is of uncertain origin. Perhaps, with allusion to the comical appearance of the wearer in the clothing, this first element is Noddy, the name of a toy figure of a boy whose head is fixed in such a way that he nods when he speaks, the central character in a series of stories for young children by the English author Enid Blyton (1897-1968).

The earliest occurrences of the expression Noddy suit that I have found are as follows, in chronological order:

1-: From the British Army Review of December 1972—as quoted in the Oxford English Dictionary (online edition, September 2019):

Whatever chemical warfare comes to mean in tactical terms, there is a good chance that for the individual it will mean living in his Noddy Suit, as the personal protective equipment appears to have been nicknamed, for a considerable time.

2-: From Germ Warfare: Shadow Of The Green Monkey, by Gwynne Dyer, published in The Whig-Standard (Kingston, Ontario, Canada) of Saturday 18th March 1978:

Despite the introduction of new British-designed protective clothing (the so-called “Noddy suit”, of which the U.S. Army has ordered 200,000), NATO troops operating in an area saturated with nerve gas or other chemical agents would be gravely hampered by the extreme discomfort of such gear.

3-: From the caption to the following photograph, in The Gordons in Chester: A weekly look at the life of The Gordon Highlanders based at Saighton, published in the Cheshire Observer (Chester, Cheshire, England) of Friday 3rd November 1978: 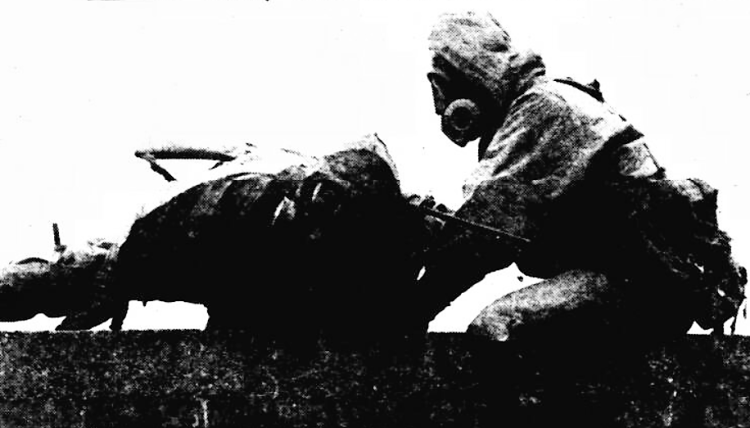 This is not a scene from the filming of “Dr. Who”—the strange attire of these “B” Company soldiers is in fact worn as a defensive measure against attack by chemical agents.
This NBC (Nuclear, Biological and Chemical) Suit has been nicknamed the “Noddy Suit” by the soldiers who often experience the difficulties of wearing them during long exercises.

4-: From a letter to the Editor, published in the Spalding Guardian (Spalding, Lincolnshire, England) of Friday 2nd May 1980:

Where is the proof of farmer’s claims?
Sir—I was surprised to see the claims made by a Mr Worth in a recent edition of the Guardian with respect to chemicals, safety and the environment.
Most local people must have seen farm employees working with chemical sprays, but having spoken to several since last week, none of whom have seen anything more protective than ordinary gloves and boots. I doubt whether anyone else has. The “noddy” suit shown in your picture is so elaborate I doubt if many farms have one, let alone enough for their employees.

5-: From the column London Day by Day, by ‘Peterborough’, published in The Daily Telegraph (London, England) of Saturday 23rd August 1980:

Poland : Nato war games go ahead
The Ministry of Defence said yesterday that despite the growing crisis over Poland, “Crusader,” the biggest NATO exercise since D-Day involving about 85,000 troops, would go ahead. Mobilisation of 20,000 Territorial Army reservists for reinforcement of the Rhine Army is due to start on Sept. 1.
[…]
Among the TAs they may encounter will be Alasdair Hutton, Conservative Euro-MP. I am relieved to hear that in none of the exercise’s three stages—picturesquely named “Jogtrot,” “Spearpoint” and “Square Leg”—will Hutton need his particular skills in chemical and biological warfare. A Territorial Army spokesman said: “Oh no, there’ll be none of that. I expect he’ll have to get into what the soldiers call a ‘noddy suit’ with a respirator, but only to see if he can eat his breakfast in it.”

6-: From Noddy suit and bounty as Reservists report!, published in the Grantham Journal (Grantham, Lincolnshire, England) of Friday 23rd October 1981:

The vast gymnasium at Prince William of Gloucester barracks assumed a new role this week, and will continue in use next week—as part of the national exercise of keeping Britain’s 45,000 Army Reservists fully kitted and up-to-date.
[…]
Certainly former R.E.M.E. corporal, and now Reservist, Matthew Limb, of Cropwell Bishop, had little to worry about when he joined the queue of other Reservists going through the Annual Reporting-centre this week.
[…]
But there was a surprise for Matthew, and not only Reservists reporting at Grantham but at other Centres throughout the UK—all were measured for special suits to be worn in the event of nuclear, biological or chemical warfare.
The bulky “Noddy Suit” doesn’t join the Reservists’ kit, which is kept readily available at home, but every Reservist now has a detailed size record for such a suit, should they ever have to go into action.
And instructor Sgt. Brian Towler put Reservist Limb through his paces on getting into the suit, and adjusting the respirator.