In Australian English, the phrase boots under the bed, and its variants, have been used to denote evidence of a de facto relationship affecting a woman’s eligibility for Social-Security benefits.

The following explanations are from Boots under the beds inspections, by Philippa Smith, welfare economist, published in The Sun-Herald (Sydney, New South Wales) of Sunday 14th August 1983:

Throughout Australia 302,000 lone parents (mostly women) and their 390,000 children are dependent on the widows’ pension or supporting parents’ benefit for their livelihood.
With pensions and benefit levels below the poverty line, life is a daily struggle for these families—especially for those renting or those with little or no outside income.
Another dilemma may arise if a woman wishes to establish a friendship with a man, since this could be regarded as a de facto relationship by the Department of Social Security. If it is, her pension will be assessed on both their incomes and will often be severely reduced.
Many pensioners argue that this is extremely unfair—that it cannot be assumed that the man will support her and her children and that she and the children could be left with no support.
Past practices of field officers inspecting homes and bedrooms—sometimes called the “boots under the bed” inspections—were also criticised as an extreme intrusion of privacy.
The fear that the pension may be withdrawn if a male friendship develops can be very forbidding. Joan, a widow with two young children, described how she isolated herself from much-needed friendship and emotional support for fear of the possible repercussions. 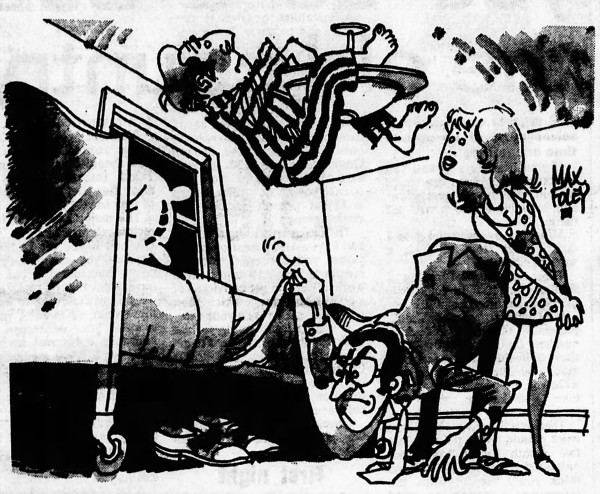 OTHER USES OF BOOTS UNDER THE BED

The phrase boots under the bed, and its variants, have also been used in Australian English to denote evidence of a de facto adulterous relationship. The following, for example, is from The Mirror (Perth, Western Australia) of Saturday 8th April 1944:

Divorce Court insists on “the whole truth.” It doesn’t want half-truths, or white lies. No one knows this better know [sic] than Mrs. Blanche Margaret Lindsay.
Her petition for divorce dismissed, Mrs. Lindsay still has to face contempt of court proceedings.
It is rare for the Crown in this State to intervene in a divorce action. This was pointed out to Mr. Justice Wolff by Crown solicitor Ted Dunphy, when, as King’s Proctor, he brought new evidence to show that Mrs. Lindsay misled the Court by concealing evidence during the hearing of her petition against Archibald Livingstone Lindsay.
Hearing of that case had been adjourned pending inquiries.
Mrs. Lindsay had been living with James Roland Dix for nearly twice as long as she admitted to the Court, said Mr. Dunphy. Moreover she was living with a man, name unknown, when she alleged her husband had deserted her.

Probation Officer BuIIey told the Court of finding a man’s boots under the bed and a man’s clothes behind the bedroom door when he interviewed Blanche Lindsay in Robertson-st, East Perth, on August 18, 1938.

More generally, and not only in Australian English, the phrase boots under the bed, and its variants, have been used, often humorously, to refer to a sexual relationship, especially an adulterous one. These are three examples:

Wife: “What are you sharpening your razor for?”
Husband: “There are a pair of gentleman’s boots under the bed. If there is no one in those boots I’m going to shave myself.”

The amazing Walter Mitty life of housewife Gillian Oram was revealed the night her husband spotted a pair of strange cowboy boots under the bed.
He recognised them immediately. They belonged to a man at the bank where his beautiful wife worked.
[…]
“I went to the house where she was staying, temporarily with a friend and she took me straight upstairs to her bedroom.
“There, I saw a pair of cowboy boots sticking out under the bed.”
He confronted his wife and the man and last September John Oram obtained a divorce.

3-: From Rank adultery—is that why the deli dude can’t cut it?, by Barry Saunders, published in The News & Observer (Raleigh, North Carolina) of Saturday 7th June 1997:

Fellas I don’t know about y’all, but I’m worried.
[…]
What has me tossing and turning these days is the spate of confessions that philandering military men are making. You don’t reckon there could be something in the water making them confess to all manner of transgressions, do you?
The latest was Air Force Gen. Joseph Ralston, vice chairman of the Joint Chiefs of Staff, who will soon be chairman despite confessing to an adulterous affair 10 years ago. Then there’s Maj. Gen. John Longhouser, who resigned from the military because, he claimed, five years ago he parked his boots under a bed other than his wife’s. Another general, Stephen Xenakis, was relieved of his duties because he was parking his boots under the bed of his ailing wife’s nurse.

4-: From The Atlanta Journal-Constitution (Atlanta, Georgia) of Thursday 1st September 2005:

I’m a 43-year-old black woman and I listen to country music. Tim McGraw and Toby Keith could park their boots under my bed anytime they want!