This phrase refers to an electric public-transport vehicle (trolley-car) driven by means of a grooved metallic pulley (trolley, also trolley-wheel) which travels along, and receives current from, an overhead electric wire (trolley-wire), the current being then conveyed by a pole (trolley-pole) to the motor of the vehicle.

Note: The noun trolley has a different meaning in the expression trolley-dash.

The phrase off one’s trolley is based on the image of a trolley-wheel coming off its trolley-wire—which seems to have especially happened when a trolley-car was rounding a bend, according to the following quotations and cartoon:

The Republican party is dashing around the curve into to-morrow’s first meeting of the new council, off its trolley wire. Dr. Crossland is still on the track and signalling his intention of boarding the wobbling old carry all. He paid his fare some weeks ago, and has a right to ride.

– From The Richmond Dispatch (Richmond, Virginia) of Friday 8th September 1893:

Senator Hill appears to be “off his trolley.”—Cincinnati Commercial.
Trolleys get off most frequently in turning a corner. Has Senator Hill “turned a corner”?

– From The North Adams Transcript (North Adams, Massachusetts) of Wednesday 5th August 1896—the following cartoon, entitled Off Its Trolley, depicts a trolley-car derailing in a bend:

Deeds are facts and are forever and ever. ● ● ● In silver countries, labor is cheap and kept cheap by the silver dollar. For my part I do not want that kind of prosperity. I want a prosperity, which, by good wages to all, is shared by all. We want a broader life broadening every day for all our people.—THOMAS B. REED. * 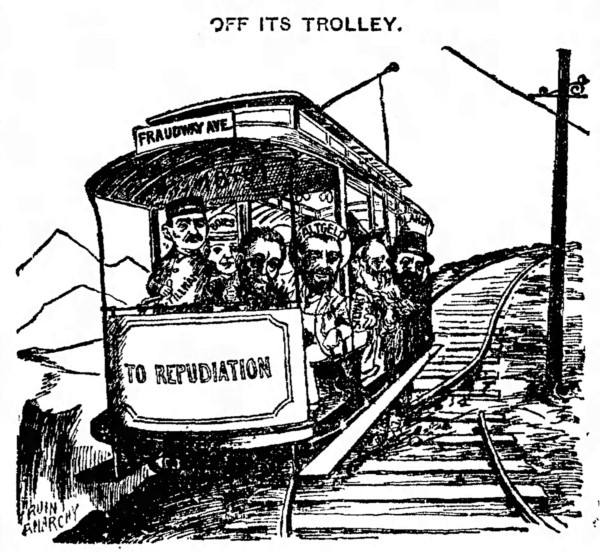 * This evidently is a satirical cartoon, but I have not discovered what it refers to. All I have found is that, in 1896, Thomas Brackett Reed (1839-1902) failed to secure the Republican nomination for the presidential election.

These are, in chronological order, the earliest occurrences of the phrase off one’s trolley that I have found:

1-: From the following advertisement, published in The Carbondale Leader (Carbondale, Pennsylvania) of Saturday 14th April 1888:

Hey! You are Off Your Trolley
if you don’t examine my stock of clothing before purchasing your spring goods.
Abe Sahm.

“Poor man,” she said, “he does look worn out. What’s the matter with him?”
“Nothin’, mum, he’ll come out all right,” the newcomer who was learning to be a motorman said. “You see he was out last night with the boys and he’s a little off his trolley, to-day.”

3-: From one of the unconnected paragraphs making up the column Of Local Interest, published in The Meriden Daily Journal (Meriden, Connecticut) of Tuesday 24th July 1888:

Up in Meriden the electrified urchin says “You’re off your trolley,” while the Derby lad tells the unsteady gaited, “You’re traveler’s loose, Mister.”—Ansonia Sentinel.

Thursday was a great day for the conductors, who were, literally speaking, “off their trolleys,” on the electric road, and when the trolley was all right, something else was generally wrong. The nearest case to an accident was that of early in the evening. As one of the cars crossed the Consolidated road, the trolley came off, and left it standing on the crossing. It had proceeded just far enough to be out of the reach of an evening train that came rushing in. The gates rested on it as they came down. It was too near for the comfort of the passengers.
About 8:20, on the Main street switch, a wait of about ten minutes was caused by the brushes getting out of order, and four cars were blocked there during that time. A half hour later, as car 32 was going over the switch upon the hill, just above Dr. Tait’s residence, the trolley came off with a bound that took with it the little pipe just above the lamp in the car. As the trolley went flying to the ground, it grazed the leg of a horse which was being driven past, and there was quite a circus. This caused a stop of about twenty minutes, and while repairs were being made the car coming down was struck on the turn, corner of Broad and Main streets, making a stop of about ten minutes, and it came down as far as the other car without any light. The conductors are in no way to blame for these stops, but they are all due to the poor trolley used.

The jag will no longer be known. The latest for a plain drunk is: “He’s off his trolley.”

6-: From one of the unconnected paragraphs making up the column Our Picayunes, published in The Daily Picayune (New Orleans, Louisiana) of Sunday 3rd April 1892:

When a visible jag is on a man in a city where street cars are run by overhead wires, they do not say: “He’s drunk.” They say: “He’s off his trolley.”

The grand finale of Republican jaw-smithing took place in Turner hall last night. […]
[…]
During the entire evening a drunken colored brother in the gallery upheld every statement or assertion made by the orators by bawling out in a voice that sounded like a man yelling out of a cistern: “Dat aint no lie.” Several times he got off his trolley wire and bawled out “Dat aint no lie,” when the orator was attempting to prove the very opposite.

9-: From one of the unconnected paragraphs making up the column City and Vicinity, published in the Watertown Times (Watertown, New York) of Thursday 21st April 1892:

“Say, what’s the matter?” asked a well-known citizen last evening of an inebriated fellow who insisted in monopolizing all of the sidewalk and part of the gutter. “Dunno,” said the unsteady traveler, “but I guess I’m off my trolley.”

With new inventions of science come new figures of speech, and thus spoken and written language is enriched. For instance, “He’s off his trolley” has already became [sic] an accepted euphemism for “He is crazy.”

Brother Harrison seems to be able to run the electric car of Rochester very well, but when it comes to playing motorman for his nomination in Minneapolis, he is likely to find out very speedily that he’s “off his trolley.”