The phrase sing ’em muck is the advice that the Australian soprano Dame Nellie Melba 1 (born Helen Porter Mitchell – 1861-1931) gave to the English contralto Dame Clara Ellen Butt (1872-1936), who was about to undertake a tour of Australia.

1 Melba, the stage name adopted by Helen Porter Mitchell, is a shortening of Melbourne, the name of the capital of Victoria, Australia, where the singer was born and made her concert debut. She gained worldwide fame for her coloratura singing, and was created a Dame of the British Empire in 1918. It was in her honour that the French chef Auguste Escoffier (1846-1935) coined pêche Melba, the name of a dessert of ice cream and peaches served with raspberry sauce or syrup, in Le Guide culinaire: Aide-mémoire de cuisine pratique (Paris: L’Art Culinaire, 1903).
—Cf. also ‘to do a Melba’ | ‘to do a Dame Nellie’: meanings and origin.

It was the English-born Australian journalist and author Harriet Winifred Ponder (1883-1967) who, in Clara Butt: Her Life-Story (London: George G. Harrap, 1928), told that Nellie Melba gave this advice to Clara Butt—as reported, for example, by The Sun (Sydney, New South Wales) of Sunday 5th August 1928: 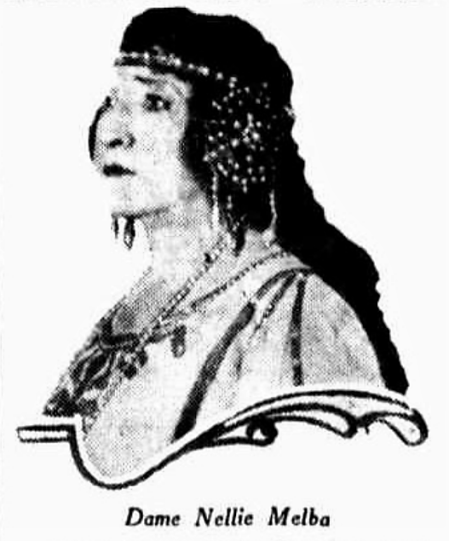 “Sing ’em muck! It’s all they can understand.”
That passage in Clara Butt’s life story by Winifred Ponder, with a foreword by Clara Butt herself—a book that has just arrived in Australia—is attributed to Dame Nellie Melba.
Last night Dame Nellie Melba strenuously denied the allegation that she had used the words.
The incident, according to Clara Butt, occurred in a special train in England, when she was returning from Windsor Castle. With her were Kreisler 2, Melba, and Tosti 3. The subject under discussion was Kennerley Rumford’s 4 Australian tour, and Melba being an Australian, was stated to be particularly interested.
“So you’re going to Australia,” she is credited with having said. “Well, I made £20,000 on my tour there, but of course that will never be done again. Still, it’s a wonderful country, and you’ll have a good time. What are you going to sing? All I can say is—sing ’em muck! It’s all they can understand!”
Dame Nellie was at Her Majesty’s Theatre last night, when the passage in the life story was brought under her notice.
“I am not in the habit of talking of my affairs to others, and I give the whole thing an emphatic denial,” she said. “And I will take the opportunity of sending Clara Butt a cable on the matter to-morrow.”
“It is interesting to note,” continues the life story, “that in spite of Melba’s opinion of her compatriots’ taste in music, Clara Butt’s experience in Australia was quite the contrary. Australian audiences proved quite as appreciative of the classical items which both she and Kennerley Rumford invariably included in their programmes, as of the more popular type of songs and ballads, and among the usual innumerable “special requests” that reached them, quite a large proportion were of such classics as Giordani’s “Caro mio ben,” 5 Handel’s “Lascia chio Pianga,” 6 “Where’er you walk,” 7 and songs by Schumann and Schubert.

I will focus, not on the controversy caused by the advice given by Nellie Melba to Clara Butt, but on:
1-: The fact that the phrase sing ’em muck soon came to be applied to other domains than music.
2-: The exact meaning of muck in this phrase.

1-: The earliest transferred use of the phrase sing ’em muck that I have found is from Direct Action: Official Organ of the Australian Administration of the I.W.W. 8 (Adelaide, South Australia) of Saturday 8th September 1928:

Don’t think, dear reader, that you are going to read a criticism of the controversy over Dame Nellie and Dame Clara Butt, for my time is too precious to waste on such a subject, and I would not willingly waste yours, but as the above heading so aptly interprets the attitude of the Australian press towards its unthinking public, the present is an opportune moment to combat this factor in our daily lives, in-so-far, at least, as work and workers are concerned.
For months now an intensive wage reduction campaign has been broadcasted throughout the length and breadth of the country, against the miners. The hoary old falsehoods, in new settings, have been indulged in, and now the coal barons, newspaper editors, and other panderers, have arrived at the conclusion that to save the industry “sacrifices,” on “both sides,” must be made.
Try to imagine, if you can, a coal baron, or a shipping magnate “sacrificing” any of his share of the good things of life, in order to assist industry, and keep from smiling if you can.
Could anything be funnier? And yet, stay! Let justice be done! Come to think of it, some coal owners have at times “sacrificed” a few hundred pounds “to assist industry,” and—er—secure juicy contracts at the same time.
Strictly business, of course!
A Sydney emporium assured the public recently that “there is an honour in business that is the fine gold of it. . . . That regards honesty and fair dealing above prices and profits. . . . . etc., etc.
Sing ’Em Muck!
[…]
Another paper joins in the “Mucky” chorus, namely, that select organ of Inchcape interests, “The Daily Commercial List and Shipping News,” which in its leader of Monday, August 6th, entitled, “The Miner’s Plight,” prefers a savage, though spurious indictment against the miners, because they dare to presume to ask for a bare existence.
[…]
“There is an honour in business . . . . maybe, but which business? Bah! “Sing ’Em Muck!”
[…]
I hope the miners will not be side-tracked, either by their officials, or the owners, into a servile body of misguided wage-slaves ready to close with any offer that may be made, and if out of your desperation an O.B.U. 9 is formed, it will bring within reach a real fighting force with which to face the “droolers” and so render useless their further attempts to “sing ’em muck.”

A more recent transferred use of the phrase sing ’em muck occurs in the review by Bob Evans of Alas, The World, by the English comedian Mel Smith (1952-2013) and the Welsh comedian Griff Rhys-Jones (born 1953)—review published in The Sydney Morning Herald (Sydney, New South Wales) of Saturday 30th November 1985:

Three shows, all with big comic reputations and devoted fans, opened in Sydney this week. Alas, the World by Smith and Rhys-Jones at the State Cinema; Opera, Opera by The Gap, Downstairs at Belvoir Street; and, Upstairs, The Castanet Club returned to Sydney as The Giddy People.
Only the Castanets were genuinely funny.
Smith and Rhys-Jones were not. However, Alas, The World is an inspired title for their indifferently derivative brand of comedy with its sing-’em-muck mentality, lame routines and regurgitated afterthoughts from television.

What did Melba say in 1906? Dame Clara Butt is quoted to the effect that the famous prima donna, acting the role of a Polonius 10, gave her this advice concerning the Australians: “Sing ’em muck! It’s all they can understand.” Dame Nellie now denounces this utterance as an untruth. She will have none of it. “Butt me no Butts!” is her attitude. “I never said anything of the sort.”
If we may venture an opinion, the advice imputed to her was fairly sound as applied to any country, although it is the kind of advice that is better spoken than repeated in writing. After all, Dame Nellie will be longer remembered for what highbrows might unpleasantly describe as the “muck” on her programmes than for her classical selections. Tosti’s “Good-bye” and “Down in the Forest” were her ace and king of trumps, and she always kept “Home, Sweet Home” up her sleeve. In the meantime we urge both ladies to be calm. Muck-raking may be the pastime of a certain type of politician, but it is not for Dames.

10 This refers to Polonius (a character in Shakespeare’s Hamlet) as a busybody.

Reminiscences of famous singers were given by Mr. E. J. Gravestock in a broadcast from Station 2FC last night.
He referred to the controversy which was aroused by the publication of Winifred Pender’s [sic] book, in which it was stated that the late Dame Nellie Melba advised Dame Clara Butt, when she visited Australia, to “sing ’em muck; that’s all they will understand.”
Mr. Gravestock said he had a vivid recollection of a supper party in Brisbane in 1924, after one of the concerts of Dame Clara Butt. Mr. Kennerley Rumford (Dame Clara Butt’s husband), Miss Pender, and himself were present. After supper Dame Clara Butt recalled the incident, which led to Dame Nellie Melba’s statement.
In 1907, when Dame Nellie Melba and Dame Clara Butt were on the way to London in a special train, the former said: “So you are going to Australia. What are you going to sing?”
“I don’t know yet,” replied Dame Clara Butt.
“Sing ’em muck,” said Dame Nellie Melba. “‘The Lost Chord,’ 11 and that sort of stuff, the same as you have been singing to-night.”
“Everybody seemed to have lost the real perspective of the incident,” added Mr. Gravestock. “It happened 25 years ago, before Australia had the benefits of conservatoriums and colleges of music, and before it had been visited by world-famous musicians, and before Melba herself had brought her wonderful opera company to Australia.”

Clara Butt was a popular singer at festivals and concerts, especially of ballads and oratorios—but not of opera. Melba also sang ballads—‘My ain folk’; ‘Believe me if all those endearing young charms’; ‘Lo! Here (sic) the gentle lark’, for instance, and recorded such “muck”.
I am glad that the tradition of “singing ’em muck” is being carried on by such wonderful singers as Dame Joan Sutherland 12 (‘Home Sweet Home’) and Dame Kiri Te Kanawa 13 (‘Songs my mother taught me’ and others).