TABLOID DRAMA.
SHAKESPEARE “BOILED DOWN” FOR THE MUSIC HALLS.

Mr. Cecil Raleigh is in favour of Shakespeare being “boiled down” for the music-hall stage.
It was after Mr. George Fuller Golden’s lecture on the influence of theatres upon the music-halls, to the members of the O.P. Club at the Criterion Restaurant, last night, that this daring proposition was made.
“If the public want tabloid journalism,” said Mr. Raleigh, “why not tabloid dramas?”
There would be no fees to pay, he added, significantly.
It was impossible to play Shakespeare as it was written, for many reasons, and it had to be altered and cut down.
Mr. Benson once put on “Hamlet” in the original, and it played all afternoon and evening.
“If the public who frequent the music-halls want to see an act from Shakespeare, as a relief from performing dogs or acrobats, let them have it,” exclaimed Mr. Raleigh.

Coined in 1884 as a trademark for concentrated drugs and medicines in tablet form manufactured by Burroughs, Wellcome & Company, the noun tabloid came to be generally applied to a compressed or concentrated version of something; as an adjective, it came to mean compressed, concentrated, especially in order to be easily assimilated.

The British journalist and newspaper proprietor Alfred Harmsworth (1865-1922) was the first to use tabloid in a journalistic sense when he designed and edited an experimental issue of the New York newspaper The World, produced for New Year’s Day, 1901. On the front page, he defined The World as “the busy man’s paper” providing “all the news in sixty seconds”. And, beneath the headline “The Daily Time-Saver”, he declared:

The World enters to-day upon the Twentieth or Time-Saving Century. I claim that by my system of condensed or tabloid journalism hundreds of working hours can be saved each year.
By glancing down the subjoined list of contents and following the arrangement of the pages the outline of the day’s news can be gathered in sixty seconds. 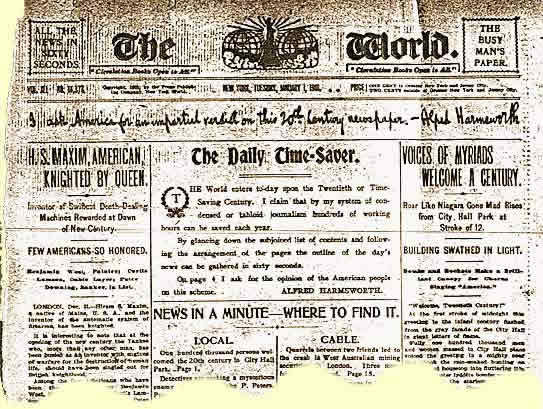 Originally therefore, the adjective tabloid, as applied to journalism, was intended to mean no more than concentrated, compressed. Similarly, the definition of tabloid as a noun denoting a newspaper in the Supplement (1933) to the New English Dictionary (as the Oxford English Dictionary was known) was:

A newspaper which gives its news in a concentrated and easily assimilable form.

If anything, the term tabloid journalism was originally complimentary, implying that this particular journalism was as “concentrated and easily assimilable”, good, handy and beneficial as tabloid medicine.

But of course, in the light of experience, tabloid journalism has become a term of abuse implying oversimplification, superficiality, bigotry and nastiness (cf. the British-English noun red top, denoting a tabloid, and the Page-Three girl of the British tabloid The Sun). The definition of the noun tabloid in the 1989 edition of the Oxford English Dictionary introduced this additional meaning (the notions that were absent from the 1933 definition are underlined):

A popular newspaper which presents its news and features in a concentrated, easily assimilable, and often sensational form, especially one with smaller pages than those of a regular newspaper.

The 1989 definition also introduced the notion that the size of the page is one of the characteristics of a tabloid. This became prevalent in the 2008 edition of the same dictionary:

A newspaper having pages half the size of those of the average broadsheet, usually characterized as popular in style and dominated by sensational stories.

But the definitions given by Alfred Harmsworth and by the 1933 Supplement to the New English Dictionary clearly indicate that tabloid originally referred to the form of the news stories, not to the size of the page.

It is true however that these two aspects were already indissociable in the experimental issue of The World on 1st January 1901, the reduced size of the newspaper page suiting the curtailed size of the articles. The following is from the New Castle News (New Castle, Pennsylvania) of 2nd January 1901:

HIS IDEA OF A MODEL PAPER.

Publishers’ Press Dispatch.
New York, Jan. 1.—Alfred Harmsworth, the English publisher, showed Americans today what he could do in the way of getting out a portable, pocketable, though breezy paper. He got out the New York World today through the courtesy of Joseph Pullitzer [sic], its proprietor, in order to give his idea of what the 20th century newspaper should be. Mr. Harmsworth was in charge of the World for 24 hours and he completely revolutionized its appearance. Instead of the usual “blanket” sheet to which Americans are accustomed, the World appeared in magazine form, with 32 pages and four columns to the page. In the form of the paper Mr. Harmsworth’s idea is to give to the public an easily portable newspaper which the business[man] and the workingman will read on his way to his daily toil, then pocket it and carry to his home in the evening.
[…]
He gives some claims for the success of the future of this kind of paper. His points are: Saving of the reader’s time; advantage to advertisers; convenient shape for carrying; neatness for carrying in the pocket.

But The Brooklyn Daily Eagle (Brooklyn, New York) of the same day pointed out that a smaller page was hardly a novelty:

The forces which will bring about a change in the shape of the newspaper page were in operation before Mr. Harmsworth became the latest agent to use them. The tendency has long been toward a smaller page, and a small page is the goal toward which publishers are striving. Just how large the page should be is a matter of detail that will settle itself by experiment. The Tri-Weekly Tribune has a small page, just one-half the size of the page of the Daily Tribune, and this shape has commended itself to the public for a paper appearing every other day. The Boston Sunday Journal is about the size of the Harmsworth edition of the World, though the week day Journal has a page about the size of that on which this article appears. The regular Saturday supplement of the New York Times has small pages. Ten years ago Frank A. Munsey bought the New York Star, and changed its name to the Daily Continent, and reduced the size of the page. He believed that a small page with the news briefly told would appeal to the public. Yet he did not think that a newspaper would succeed because of its shape if it lacked enterprise and originality. The Continent did not last long. Yet the pages of newspapers will be smaller before they are larger.