In Jesus Hilton:
– Jesus refers to the fact that St Vincent’s Private Hospital is operated by a religious organisation, St Vincent’s Health Australia; the hospital was founded in 1857 by the Sisters of Charity.
– Hilton alludes to the hospital’s plushness.

The following explanations are from The Lingo: Listening to Australian English (University of New South Wales Press Ltd, 1999), by Graham Seal—Darlo is the diminutive of Darlinghurst:

Lovingly malicious names may also be given to public buildings like the Ministry of Education building in Perth, called from its metallic-style architecture, SILVER CITY. The Qantas twin towers in Sydney used to be known to Qantas staff as BULLSHIT TOWERS while the historical St Vincent’s Hospital in the same city, known to cabbies and many Sydneysiders as VINNIES or ST VINNIES, also has a plush private section that revels in the title of the JESUS HILTON and, more prosaically, as the DARLO HILTON.

The name Jesus Hilton occurs in the following from People, edited by Ron Saw, published in The Bulletin (Sydney, New South Wales) of Tuesday 10th April 1984:

In the weeks since Sir William McMahon 1 booked himself into St Vincent’s Private Hospital, a/k/a the Jesus Hilton, in Sydney, the calamity-howlers, even those who knew that you couldn’t kill Billy with an axe, had been at it tirelessly, predicting every kind of doom imminent for the gabby one-time Prime Minister. Last week, two days before he left hospital, Billy could contain himself no more. One of his 30-40 daily telephone calls was to The Daily Telegraph’s Dorian Wild, to whom he spilled the beans: he had gone to have a small bit of dead skin removed from the back of his left ear. It was not surgery to make the ears look less avian. That would have been shutting the trap some 70 years after the bird had flown. 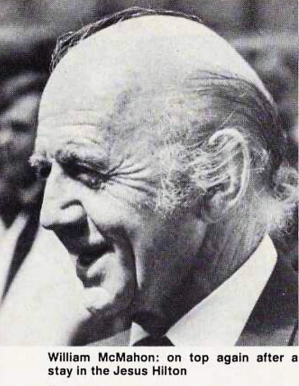 William McMahon: on top again after a stay in the Jesus Hilton

The Australian author and historian Humphrey McQueen used Jesus Hilton in Healthcare is not a product, no matter what neoliberalism has taught us, published in The Guardian (London and Manchester, England) of Thursday 22nd May 2014:

In a further concession to neoliberalism, we’re all encouraged to advocate equality of opportunity when the call should be for equality of outcomes. It is one thing for every Australian to have the same rate of access to heart surgery. It is another to get the same quality of care at Bourke 2 as in the Jesus Hilton  (aka St Vincent’s Private).

2 Bourke is a town in New South Wales, located 760 km north-west of Sydney.

The following is from PS: Funds flow for St Vincent’s at John Symond’s lavish bash, by Andrew Hornery, published in The Sydney Morning Herald (Sydney, New South Wales) of Friday 8th May 2015:

When Darlinghurst’s St Vincent’s Private Hospital first opened its doors it was considered so plush it was nicknamed “the Jesus Hilton”.
Sadly those days are long gone and the hospital is about to undergo a $115 million refurbishment, though $25 million of that budget depends on the generosity of Sydney’s silvertails 3, many of whom gathered at John Symond’s Point Piper pile on Monday night to raise money.

3 This is the definition of the Australian-English noun silvertail from Austral English: A dictionary of Australasian words, phrases and usages, with those Aboriginal-Australian and Maori words which have become incorporated in the language and the commoner scientific words that have had their origin in Australasia (London: Macmillan and Co. Limited, 1898), by Edward Ellis Morris (1843-1901 or 1902):

Silver-tail, n. a bush term for a “swell”: a man who goes to the manager’s house, not to the men’s hut.