Of British-English origin, the colloquial phrase (all) the world and his wife denotes a large group of people of various kinds.

The following are the earliest occurrences of (all) the world and his wife that I have found:—

1-: From an advertisement published in The Daily Post (London, England) of Tuesday 30th June 1730 and following days: 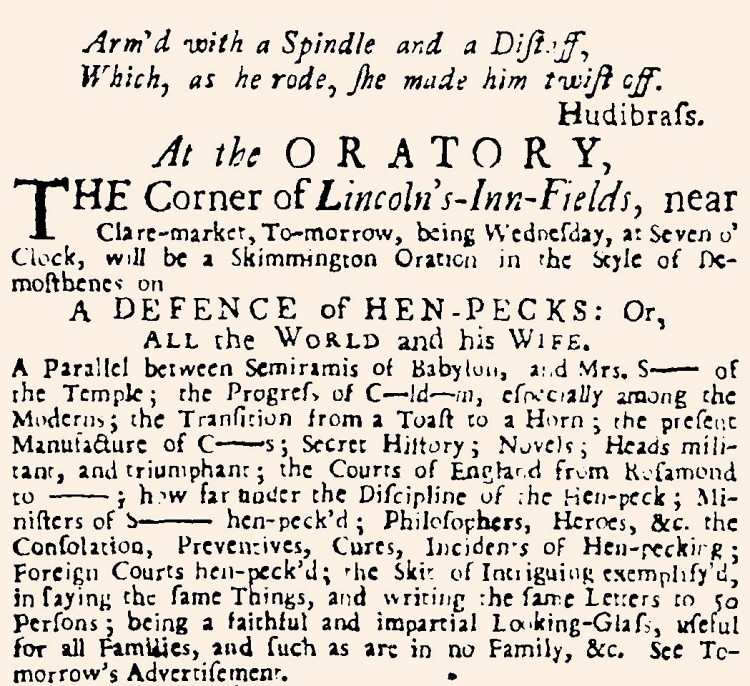 Arm’d with a Spindle and a Distaff,
Which, as he rode, she made him twist off.
Hudibras. *
At the Oratory,

The Corner of Lincoln’s-Inn-Fields, near Clare-market, To-morrow, being Wednesday, at Seven o’Clock, will be a Skimmington Oration in the Style of Demosthenes on

A Defence of Hen-pecks: Or,
All the World and his Wife.

A Parallel between Semiramis of Babylon, and Mrs. S—— of the Temple; the Progress of C—ld—m, especially among the Moderns; the Transition from a Toast to a Horn; the present Manufacture of C——s; Secret History; Novels; Heads militant, and triumphant; the Courts of England from Rosamond to ——; how far under the Discipline of the Hen-peck; Ministers of S—— hen-peck’d; Philosophers, Heroes, &c. the Consolation, Preventives, Cures, Incidents of Hen-pecking; Foreign Courts hen-peck’d; the Skit of Intriguing exemplify’d, in saying the same Things, and writing the same Letters to 50 Persons; being a faithful and impartial Looking-Glass, useful for all Families, and such as are in no Family, &c.

2-: From A Complete Collection of Genteel and Ingenious Conversation, according to the Most Polite Mode and Method now used at Court, and in the Best Companies of England (London: Printed for B. Motte, and C. Bathurst, 1738), by the Irish satirist, poet and Anglican cleric Jonathan Swift (1667-1745).
Composed in the first decade of the 18th century, this book is a satire on the use of clichés: its purported author, Simon Wagstaff, assures “the Reader, that there is not one single witty Phrase in this whole Collection, which hath not received the Stamp and Approbation of at least one hundred Years” (cf. in this regard the authentic origin of ‘to rain cats and dogs’).
—The relevant passage is from Dialogue III. The Ladies at their Tea. (“The Ladies” are Lady Answerall, Lady Smart and Miss Notable):

[…]
Lady Answ. Madam, I was t’other Day in Company with Mrs. Clatter […].
[…]
Lady Smart. Well, She and Tom Gosling were banging Compliments backwards and forwards; it look’d like Two Asses scrubbing one another.
Miss. Ay, claw me, and I’ll claw thou: But pray, Madam, who were the Company?
Lady Smart. Why, there was all the World, and his Wife; there was Mrs. Clatter, Lady Singular, the Countess of Talkham, (I should have named her first;) Tom Goslin, and some others, whom I have forgot.

3-: From the following letter to the Editor of Harrop’s Manchester Mercury, and General Advertiser (Manchester, Lancashire, England), published in that newspaper on Tuesday 19th June 1753:

To Mr. Fitz-Adam.
Sir,
As it is possible I may one Time or other be a Correspondent of yours, and may now and then, perhaps, have a strong Impulse to pay you a Compliment, I am willing to know how far I may go without giving Offence, and whether, by the Advertisement at the End of your first Number, you mean to exclude all Allusions to the Expression, The World, even though the Turn of them should be such, as would be rather treating you with Civility than otherwise? As for Instance:
When a Man is just upon the Point of committing a vicious Action, may he check himself by this Thought, What will the World say of me? May a Man be threatened that if he does such a Thing The World shall know it? May it be said, That the World esteems a Man of Merit? In short, may the Praise and Censure of the World be made Use of without Offence, as Arguments to promote Virtue, and restrain Vice?
I am entirely unacquainted with your Situation in Life; but if you are a married Man, I take the Liberty to give you one Piece of Advice. There are certain Places of public Entertainment, which though they may chance to be tolerated by Law, it were to be wished, for prudential Reasons, were more discouraged, and less frequented. Example, Mr. Fitz-Adam, is very prevalent; and the Advice I would give you is, that whenever you think proper to go to any such Places for your own Amusement, you would leave your Lady at home; for there is nothing gives greater Encouragement than to have it said, There was all the World and his Wife; from whence it is concluded, that all the World and his Wife will be there again the next Time. I am Sir,
Your Admirer and humble Servant,
Cosmophilos.

Letter VI. The Countess of Cockles, (a dramatic Author) to the Honourable Miss Fanny Fitzkickerly, in Portman-Square.
[…]
I have been to a rout big with high expectations,
Where Folly I found had still—many relations.
The Routs of this Place, like the Balls at Elections,
Comprehend in one mass all degrees and complexions:
The place was Macpharaoh’s—the time was last night,
Where we’d much serious play, and much—well-manner’d spite:
Antithetic debating—some snarl—could you doubt it,
While a Feminine Conclave talk’d—how and about it?
Mid the crowd there were some with the Graces at strife,
For this Hostess invites—all the world and his wife.

All the world and his wife were at Hyde Park yesterday to see the Irish chestnut gelding take a leap of five feet eight. The bet was won twice over, for the wall was twice cleared. The Prince, to his credit, escaped this group of blacklegs and blackguards. His Highness was sent for, but sent word he could not come.

Harrowgate has overflowed this year with the family of John Bull. All the World and his wife, the rising generation, &c. One may guess at the classes of the company by the names given to the different lodging-houses there. The Granby was called the House of Lords; the Green-Dragon, the Commons; and the Queen’s Head, the Manchester warehouse.