The phrase see you later, agitator has, in the course of time, been coined on separate occasions by various persons, independently from one another.

The earliest occurrences of see you later, agitator that I have found:
– are American English;
– serve as the punchline to a joke about two washing machines.

The first occurrence is from the conclusion of Sophomore News, in The Little Newsance, official publication of Lake Park High School, published in The Lake Park News (Lake Park, Iowa) of Thursday 20th September 1956:

That’s about all for this week, so as one washing machine said to the other, “see you later agitator.”

The second-earliest occurrence that I have found is from the Hill Top Times (Hill Air Force Base, Utah) of Friday 2nd November 1956:

One washing machine to the other: “See you later, agitator.”

This joke about washing machines, which regularly reappeared, is probably what this advertisement for The Oklahoman Classified Cash Finder refers to in The Daily Oklahoman (Oklahoma City, Oklahoma) of Wednesday 12th August 1992: 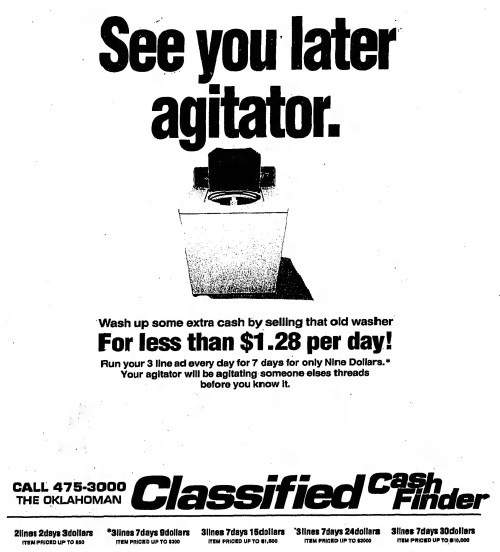 See you later agitator.
Wash up some extra cash by selling that old washer
For less than $1.28 per day!
Run your 3 line ad every day for 7 days for only Nine Dollars.*
Your agitator will be agitating someone elses [sic] threads before you know it.
* 3lines 7days 9dollars

See you later agitator.
Wash up some extra cash by selling that washer.
Leader Post Classifieds 569-1100

The phrase has been used in British and Irish English too. For example, in the column Your Dance Diary, published in The Argus (Drogheda, Louth, Ireland) of Saturday 23rd February 1957, ‘Mickser’ wrote the following about the upcoming Bill Haley 1 show at Dublin’s Theatre Royal:

It goes without saying, of course, that your’s [sic] truly will be there and next week or the week after I will endeavour to give you a picture of the scene. I learned that the famous Vic Lewis orchestra will accompany Bill and his Comets for the trip. See you later, agitator!

“See you later, agitator,” was the strike cry.

The phrase was also used in South Africa, according to Pendennis 2 in his column Table Talk, published in The Observer (London, England) of Sunday 30th June 1957:

A Trial, Crocodile
The 156 people accused of treason in Johannesburg 3 remain cheerful in spite of the strain and crippling cost of the trial. Their latest slogan, as they leave the dock every day, is “See you later, agitator.”

2 Pendennis was the pen-name of the British author and journalist Anthony Sampson (1926-2004).
3 In 1956, 156 people, including the South-African statesman Nelson Mandela (1918-2013), were arrested in a raid and accused of treason in South Africa. (A personal friend of Nelson Mandela, Anthony Sampson helped to draft his defence speech at this treason trial.)

DURING THE COLD WAR

It is worth noting, among the numerous occurrences of the phrase, its application to Communists during the Cold War—i.e., during the state of hostility that existed between the Soviet-bloc countries and the Western powers from 1945 to 1990.

For example, the following is from the column On the Town, published in the Saskatoon Star-Phoenix (Saskatoon, Saskatchewan, Canada) of Friday 12th July 1957:

Grant Maxwell is chuckling these days about this tidbit from the London News-Chronicle:
“See you later, Agitator.”
“Not tonight, Stalinite 4.”

4 Joseph Stalin (Iosif Vissarionovich Dzhugashvili – 1879-1953) was the General Secretary of the Communist Party of the Union of Soviet Socialist Republics (USSR) from 1922 to 1953.

Likewise, the following is from the Garden City Telegram (Garden City, Kansas) of Friday 26th July 1957:

Garden Sass
As one hep Communist said to the other: “See you later, agitator.”