The self-explanatory phrase I’ve started, so I’ll finish gained currency in British and Irish English from its frequent use by Magnus Magnusson 1 on the BBC-Television quiz programme Mastermind, which he presented from its creation in 1972 until 1997.

1 Magnus Magnusson (1929-2007) was an Icelandic-born journalist, translator and author.

The anonymous author of Magnus Magnusson’s obituary, published in The Telegraph (London, England) of Monday 8th January 2007, explained that the presenter of Mastermind said I’ve started, so I’ll finish

whenever the bleeper sounded for the end of the round while a question was still in the process of being asked.
This defiant response to the peremptory demands of the urgent mechanical noise gave a measure of the humanity he allowed in what appeared to the viewer to be a peculiarly terrifying process.

In Only a game: Or is it?, published in the Education section of The Guardian (London and Manchester, England) of Tuesday 22nd December 1981, Jack Cross mentioned the role that Magnusson’s catchphrase played in “the attractions of television’s Mastermind”:

The music (“Approaching Menace” from the BBC mood-tape library) fades, house lights dim, and the most recognisable chair in Britain awaits the first contender. On seventeen autumn and winter evenings during each of the past ten years about 10 million people have settled to watch Mastermind, spurning the muscular counter-attractions of programmes like The Professionals on the commercial channel. On December 27, something like 14 million viewers will take their postprandial pleasure in watching the finalists under interrogation. […]
[…]
[…] The academic surroundings, the ritualised procedure, the emphasis on memory and recall and the ever-present sense of the passing of unforgiving seconds seem to convey an illusion of a school that never was. Mastermind is the nearest most people ever come to the student’s ultimate torment, the viva. The presence of Magnus Magnusson, like a kind but Calvinist dominie, sternly administering the rules that he himself must keep (“I’ve started, so I’ll finish”) adds to the ambience.

illustration by Reading for Only a game: Or is it?—The Guardian (London and Manchester, England)—22nd December 1981: 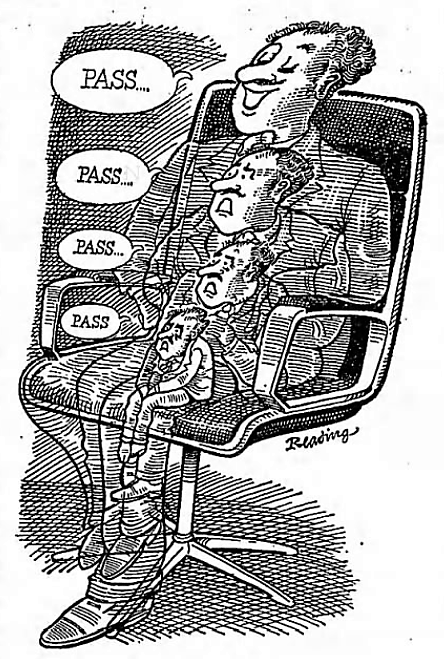 The earliest occurrences of the phrase that I have found explicitly refer to BBC’s Mastermind and to Magnus Magnusson. The first of these occurrences is from the humoristic column Keith Waterhouse 2 on Thursday, published in the Daily Mirror (London, England) of Thursday 12th January 1978:

The latest pub craze is the general knowledge quiz, inspired, I shouldn’t wonder, by television’s Mastermind.
On Merseyside, where there are 200 quiz teams divided into sixteen leagues, I gather that it is nowadays impossible to order a pint without being asked for the name of Henry VIII’s second wife.
In West Yorkshire, with twenty-six teams, the usual form of greeting in many pubs is no longer “What are you having?” but “Where were the 1908 Olympic Games held?”
In parts of South Wales, when the closing-time bell rings, the landlord bellows: “I’ve started so I’ll finish. What is the span of the Golden Gate bridge in San Francisco?”

The second occurrence if from an interview of David Essex 3 by Adam Roberts, published in the Liverpool Echo (Liverpool, Merseyside, England) of Saturday 6th August 1983:

“Sometimes I feel like slipping away from it all, but after a week or two I’m ready for work again. It’s not that I’m ambitious, it’s more like Magnus Magnusson says to the contestants on ‘Mastermind’ . . . ‘I’ve started so I’ll finish.’”

The earliest occurrence of I’ve started, so I’ll finish used without explicit reference to BBC’s Mastermind or to Magnus Magnusson is the caption to this photograph of the participants in the Great North Run 4 of Sunday 30th June 1985, published in The Journal (Newcastle upon Tyne, Tyne and Wear, England) of Monday 1st July 1985: 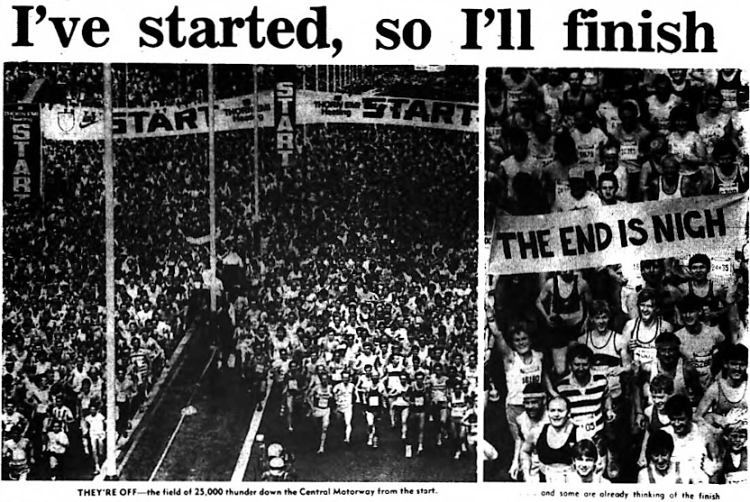 THEY’RE OFF—the field of 25,000 thunder down the Central Motorway from the start. . . . and some are already thinking of the finish

4 The Great North Run is a half-marathon taking place annually between Newcastle upon Tyne and South Shields.

The phrase occurs in In the hot seat! Patient Mike grabs chance to shine, published in the Liverpool Echo (Liverpool, Merseyside, England) of Friday 24th April 1987:

Patience is a virtue Mike Hooper 5 acquired years ago, which has stood him in good stead since his arrival at Anfield.
As an understudy to Bruce Grobbelaar 6, he knew he would have to bide his time before breaking into the Liverpool first team and that it would take an injury to the Zimbabwe keeper for him to be given that chance.
[…]
Bruce’s broken elbow means it’s a case of “I’ve started so I’ll finish” for Hooper who will see out the rest of the season […].