One of the comparatively few phrases of an upper social stratum, protocol, alcohol and Geritol first appeared as a summary of social life in Washington, District of Columbia, especially for aged men.

Geritol is the name of a tonic that was originally intended for middle-ageing persons—as specified in the earliest advertisement that I have found, published in the Chicago Daily Sun-Times (Chicago, Illinois) of Sunday 27th August 1950:

Which of these “over-35” age signs do you suffer from?
Study this chart carefully—then read the astonishing offer below! 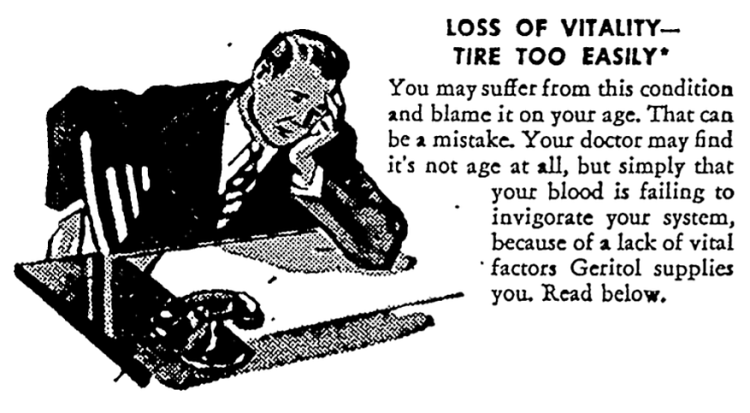 LOSS OF VITALITY—TIRE TOO EASILY *
You may suffer from this condition and blame it on your age. That can be a mistake. Your doctor may find it’s not age at all, but simply that your blood is failing to invigorate your system, because of a lack of vital factors Geritol supplies you. Read below.
[…]

ANEMIA *
Geritol contains supplemental amounts of the remarkable new red-Vitamin B12, acclaimed by scientists as one of the great discoveries of our generation. Medical results are almost unbelievable when this factor is prescribed for those needing it. A remarkable improvement is felt quickly.
[…]
* The above symptoms may have many causes; when they persist, see your doctor.
If you suffer from what you think is “middle-age” let-down . . . here is great news. Your chances are as high as fifty-fifty that your age is not alone to blame. You may be a victim of deficiencies which can now be overcome, by the remarkable new scientific product, GERITOL.

The earliest occurrence of the phrase protocol, alcohol and Geritol that I have found is attributed to Grayson L. Kirk (1903-1997), 14th President of Columbia University from 1953 to 1968, by Betty Beale (Elizabeth Virginia Beale – 1911-2006) in her column Betty Beale’s Washington Letter, published in the Stamford Advocate (Stamford, Connecticut) of Saturday 7th February 1959:

Washington, D.C.
February 7, 1959
Dear Clara:
[…]
Columbia University President Grayson Kirk quipping that Washington is completely dominated by protocol, alcohol and Geritol. He met the wrong people. Most of us are just having a ball!

(This text was republished in several U.S. newspapers on Sunday 8th February 1959.)

The second-earliest occurrence of the phrase that I have found is, again, attributed to Grayson L. Kirk by Betty Beale in her column published in The Evening Star (Washington, D.C.) of Sunday 15th February 1959—Betty Beale was proud of being Washingtonian born and bred:

Representative Frank Thompson, jr., of New Jersey, prime backer of Washington’s Cultural Center, has written in his news letter, “nothing about life in Washington is quite so deadly as is the round of breakfasts, luncheons, cocktail parties and dinners at the opening of each session.”
Columbia University President Grayson Kirk recently embraced the whole picture in one sentence. “Washington,” he said, “is completely dominated by protocol, alcohol and Geritol.”
Sounds just like a New Yorker. Obviously Mr. Kirk hasn’t been into the mysteries of what makes this metropolis hum, because he is only one-third right. ’Tis true the passing panorama of parties is paced by protocol.
But anyone who daily watches hundreds of Capitalites plodding through snow, rain or traffic to get to a party, knows that they can’t have tired blood. They can’t even have tired feet. . . on the contrary, most of them look so buoyant and beaming as they break their necks to sashay into a soiree they’d make a good ad for Wheaties.
As for that alcohol epithet—tut, tut, tut, Mr. Kirk, you must have been reading my colleague Inez Robb’s description of a New York canape caper, wherein she said that no well-mannered persons go to cocktail parties for there the law of the jungle prevails—“an eye for an eye, a claw for a claw and a clout for a cocktail.”

Bill Henry (William Mellors Henry – 1890-1970) specified to whom and to which circumstances the phrase applied, in his column By the Way, published in the Los Angeles Times (Los Angeles, California) of Wednesday 20th May 1959:

By the way, you’ve perhaps heard the Washington gag, inspired by the sight of so many over-age politicians showing up at cocktail parties, which goes: “Washington operates on protocol, alcohol and Geritol!”

The following humorous definition of protocol, alcohol and Geritol is from Washington Memo, published in The Des Moines Register (Des Moines, Iowa) of Tuesday 16th June 1959:

Washington, D.C.
[…]
FORMULA: There’s a new prescription going around town to help one and all endure the way things are here. It involves protocol, alcohol, and Geritol—protocol when you’re “in,” alcohol when you’ve been kicked out, Geritol when you don’t care anymore.