Ruritania was originally the name of the fictional kingdom in central Europe which provides the setting of the adventure novels The Prisoner of Zenda (1894) and Rupert of Hentzau (1898), by the English novelist and playwright Anthony Hope (Anthony Hope Hawkins – 1863-1933).

This name is composed of:
– the Latin combining form rūri- (from classical Latin rūs/rūris, the country as opposed to the city—cf. the English adjective rural),
– the suffix -tania, as in Lusitania, from classical Latin Lūsĭtānĭa, the name of an ancient Roman province in the Iberian Peninsula, corresponding to modern Portugal.

Very early, both the name Ruritania and the adjective Ruritanian came to be used with reference to:
1: romantic adventure and intrigue,
2: any imaginary or hypothetical country.

In his review of the romantic play The Prisoner of Zenda, first published in The Saturday Review of Politics, Literature, Science, and Art (London) of 11th January 1896, the Irish playwright and polemicist George Bernard Shaw (1856-1950) wrote the following about the novel and its hero:

Rassendyl is really nothing but a pasteboard pattern of manly attitudes to be struck in the act of doing one’s duty under difficult circumstances, a figure motived by conventionalities, without individual will, and therefore without reality or humanity. If it were not for Mr Hope’s light touch and sense of fun, the whole book would be as dull and mechanical a rigmarole of adventure as its last chapters. As it is, all the attempts to indicate the serious worth and rarity of the qualities which Rassendyl carries so lightly, bore and jar us by threatening to awake our common sense, which, if aroused, must immediately put a summary stop to the somewhat silly Ruritanian gambols of our imagination.
—as reprinted in Volume 1 of Dramatic opinions and essays with an apology by Bernard Shaw; containing as well A word on the dramatic opinions and essays of Bernard Shaw by James Huneker (New York: Brentano’s, 1906)

George Alexander (George Alexander Gibb Samson – 1858-1918) in the romantic play The Prisoner of Zenda—illustration from The Illustrated Sporting and Dramatic News (London) of 15th February 1896: 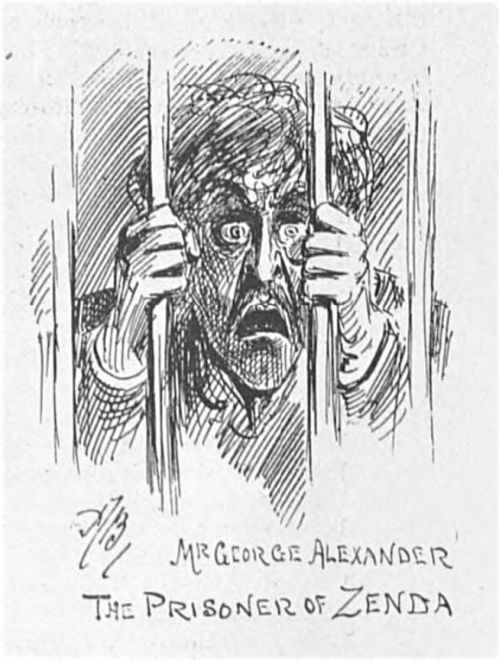 2: ANY IMAGINARY OR HYPOTHETICAL COUNTRY

In The War of 1812, published in The English Illustrated Magazine (London) of March 1896, Harold Frederic used as illustrative examples two hypothetical countries, Barataria and Ruritania:

The reflection which is forced first of all upon anybody who sets out to understand the causes of this war of 1812 is one of doubt whether the world has really grown more peaceable in these days of telegraphs and daily journalism and general progressive civilisation. In our own day we see nations stung into uncontrollable fury on an hour’s notice. We read in our morning papers that the President of Barataria has used this or that language in his Message; or we decipher from the tape the fact that the Emperor of Ruritania has dispatched such and such a telegram; and forthwith war-clouds darken the sky, and the air smells of sulphur.

Likewise, the hypothetical country of Ruritania was used as an illustrative example in Short Story from the City. II.—Showing How a Logroller came to Grief, published in The Westminster Budget (London) of 13th March 1896:

Let us take the case of Mr. Gladwyn Glassox. His later promotions made a procession of dismal failures, and the public would not be tempted by the most alluring baits he could devise. There was the Ruritanian Beverages Company, formed to acquire a monopoly of making and selling temperance beers and other morally excellent but physically depressing drinks in Ruritania. The reigning prince had given the concession on easy terms, for he could not think that many of his subjects would so far ignore his personal example as to drink stuff on which they could “get no forrader [cf. note].” Mr. Glassox had prepared a very fine prospectus for this company. He ascertained the proportion of teetotalers (children in arms not excluded) in the population of the United Kingdom, and applied the ratio to Ruritania. Then he estimated the annual capacity of the average teetotaler and proved that the Ruritanian Beverages Company would have an output and sale of so many million gallons, showing a profit of so many thousands a year.

Note: A colloquial form of forwarder, forrader appears in phrases such as to get no forrader, meaning to get no forwarder in drunkenness. For example, an article published in the East & South Devon Advertiser (Newton Abbot, Devon, England) of 1st August 1885 evoked

the old farmer who objected to continually drink cheap claret—he had drunk and drunk, but never got no “forrader.”