The article that I wrote on the word rock bottom has reminded me of Rock Bottom (Virgin Records – 1974), an album by the English musician Robert Wyatt (born Robert Wyatt-Ellidge – 1945).

This in turn has reminded me that this artist’s work gave rise to the British-English verb to Wyatt, meaning to play abstruse music on a jukebox with the intent of irritating pub customers.

The earliest occurrences that I have found are from an article by Ned Beauman, published in The Guardian (London and Manchester, England) of Monday 10th July 2006:

Just as the best way to judge an adult is by his or her record collection, the best way to judge a pub is by the albums on its jukebox. Or it was, until the 21st-century caught up with the noisy machine in the corner. There are now nearly 2,000 internet-connected jukeboxes in the UK, each of which can access as many as 2m tracks – and with them has come Wyatting, which is either a fearless act of situationist cultural warfare or a nauseatingly snobbish prank, depending on who you ask.
[…]
Carl Neville, a 36-year-old English teacher from London, coined the term “Wyatting” because sticking on Dondestan, the 1991 avant-garde jazz-rock LP by ex-Soft Machine singer Robert Wyatt, is the perfect way to disrupt a busy Friday night in a high street pub.

The second-earliest instance of to Wyatt that I have found is from the review by Tim Adams of Comicopera, Robert Wyatt’s 12th solo album, published in The Observer (London, England) of Sunday 16th September 2007:

Robert Wyatt lately spawned a verb. To ‘Wyatt’ is to choose something obscure and annoying from a pub juke box in an attempt to empty the establishment. It was coined by a young teacher in London who found that Wyatt’s 1991 offering ‘Dondestan’ had a particularly powerful effect in this regard. Wyatt himself subsequently confessed to rather liking the idea. ‘I don’t really like disconcerting people, but even when I try to be normal I disconcert anyway,’ he suggested.

Unsurprisingly, homonymous verbs have been coined in the past with reference to other persons surnamed Wyatt and with various meanings.

Two English architects each gave rise to one of those verbs, used in the passive voice and meaning restored by Wyatt:

1-: Jeffry Wyatville (born Jeffry Wyatt – 1766-1840) in Recollections of the author of “Vathek”, by the British author and journalist Cyrus Redding (1785-1870), published in The New Monthly Magazine and Humorist (London, Henry Colburn) of July 1844—Monmouthshire is a county of south-eastern Wales:

Meeting him afterwards at a flower show in Sidney Gardens I mentioned that I was going into Monmouthshire, and should in my way visit the observatory at Clifton […]. On my return, he inquired which of the ruins I preferred.
I replied “Tintern.”
“O, but the castles?”
“Chepstow.”
“Not Ragland?”
I answered in the negative, because Ragland was made a show place. “Wyatt had been set to ‘improve’ the ruin.”
“Improve a ruin!—Wyatt? Time is ruin’s architect—so Ragland has been Wyatted. I saw it then before it was ‘improved.’ What have they done!”
“Removed the fallen fragments—kept the greensward where they fell neat and trim for walking upon—set up a stone table, with timber legs fluted, in the roofless hall—you feel in a moment art has been intermeddling. Chepstow has been left to time and storm.”

2-: James Wyatt (1746-1813) in James Wyatt and Wilton House, by Christopher Hussey, published in Country Life (London) of 8th August 1963—Wilton House is a country house at Wilton, near Salisbury, in Wiltshire, England; Inigo Jones (1573-1652) was an English architect:

On the last project Lord Carnarvon warned that “a new front will be costly,” but trusted that “Wyatt will imitate the simplicity of old Inigo on the outside and bestow the cash on the Cloysters, Library and Hall . . . all this well Wyatted would be fine, with the armoured figure of old Montmorency shaking his spear in one corner, and make a good promenade for the Ghosts who have been expelled from Salisbury Cathedral by Wyatt’s tombless lawn.”

The verb to Wyatt appears in a poem about the British politician, author, journalist and broadcaster Woodrow Lyle Wyatt (1918-97) in The Ayes and the Noes (Macdonald – London, 1957), a satire of thirty-three Parliamentary figures by Christopher Hollis, illustrated by Cummings—the verb, used in the gerund form Wyatting, seems to denote conflict, since it is the subject of to break out, meaning to flare up:

To Wyatt was also used—and defined—in an advertisement for the advertising agency Robert Acomb Inc., published in The Cincinnati Enquirer (Cincinnati, Ohio) of Saturday 16th September 1978—among the employees of this agency that this advertisement presented, was: 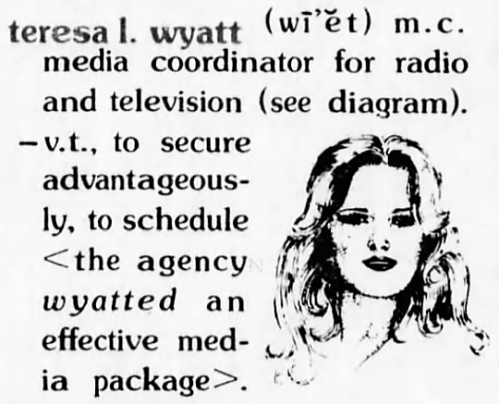