The phrase to go down the pan alludes to pan in the sense of the bowl of a toilet. This British-English use of pan is illustrated by the following from Lectures on the science and art of sanitary plumbing (London, 1882), by Samuel Stevens Hellyer: 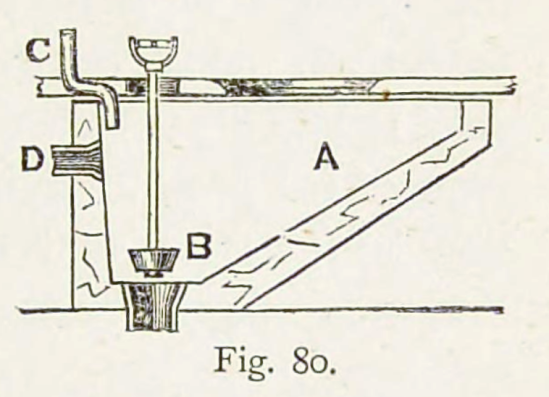 Fig. 80 represents the best form of water-closet used in England about a century or a century and a half ago. These water-closets were made of marble—A the pan; B the waste-plug; C the service-pipe; D the over-flow.

The earliest instance of to go down the pan that I have found is from Curate ran bets book and a wayside cafe, by Stanley Bishop, published in the Daily Herald (London, England) of Friday 6th January 1950—this article gave an account of the public hearing by the local bankruptcy court of “the Rev. Frederick Lee Wall Richmond, aged 49, one-time curate at Pinner, Middlesex, and a schoolmaster, and lately proprietor of Eddie’s Cafe on the Bath-road, near Taplow”:

“You have said,” asked the Official Receiver, “that between 1936 and 1939 you were a member of a betting syndicate on dog races. Is that true?”
“That’s right,” said Richmond.
“I had to go to the tracks. It was not just a question of sitting there. You had to produce the cash and make a book.”
Richmond added that his system “did nicely. And we made money. But one syndicate went wrong. My share went down the pan like the others. I lost about £130.”

The second-earliest occurrence that I have found is the column Under the Counter, by Noel Whitcomb, in the Daily Mirror (London, England) of Saturday 25th August 1951:

Remark: In the following passage from Racing Ragout, by ‘Regular’, published in The Tatler (London, England) of Wednesday 20th March 1940, it seems that pan alludes to a metal vessel used in cooking and that the phrase to finish down the pan means to finish at the bottom of the pack:

When you see a horse finishing a million miles an hour, which just fails to get up, you naturally assume that if the distance had been slightly extended he would have won, and next time out you back him confidently.
His trainer assures his jockey that he stays for ever, and that his previous jockey threw the race away on him by coming too late, and that he’s to make plenty of use of him. The jockey carries out his instructions to the letter, but the horse finishes down the pan. The trainer scratches his head and doesn’t know what the hell to make of it.