Of American-English origin, the colloquial term brownie point denotes a notional credit for an achievement, especially gained by sycophantic or servile behaviour.

It is generally said that brownie point is:
– a) either a development from brown-nose,
– b) or from the notion that Brownies earn points for good deeds.

a) The word brown-nose:
– originated in the image of a subservient person holding their nose to the anus of the person with whom they are currying favour;
– as a noun, denotes an abjectly subservient person, a sycophant;
– as a verb, means to curry favour with (someone) by acting very obsequiously.

(It is furthermore generally said that brownie point was influenced either by Brownie in the sense of Girl Scout or Girl Guide if it is a development from brown-nose, or by brown-nose if it originally referred to Brownie (Girl Scout/Girl Guide).)

However, in my opinion, these are erroneous etymologies, because the text in which are the earliest instances of brownie point that I have found seems to imply that this term originally referred to the noun brownie meaning a benevolent elf that supposedly haunts houses and does housework secretly—a noun which, incidentally, is the origin of Brownie in the sense of Girl Scout or Girl Guide.

The text in question is Brownie Points—a New Measure of a Husband, by Marvin Miles, published in the Los Angeles Times (Los Angeles, California) of Thursday 15th March 1951; two facts seem to support my theory:
– Marvin Miles likens the system of brownie points to an “esoteric cult”, to “pixie mathematics”, to “genie geometry” and to “elfin calculations”;
– his interlocutor tells him that this system “started way back in the days of the leprechauns”, to which Marvin Miles replies “If a leprechaun figured out brownie points, […] you can bet it was a girl leprechaun, some scheming sprite who wanted to tie up her guy’s conscience.”

The text is as follows:

I first heard about them when the chap standing next to me in the elevator pulled a letter from his pocket, looked at it in dismay and muttered:
“More lost brownie points.”
Figuring him for an eccentric, I forgot about them until that evening when one of the boys looked soulfully into the foam brimming his glass and said solemnly:
“I should have been home two hours ago . . . I’ll never catch up on my brownie points.”
Brownie points! What esoteric cult was this that immersed men in pixie mathematics?
“What are you talking about?” I asked.
“Brownie points,” he said. “You either have ’em or you don’t. Mostly you don’t. But if you work hard you sometimes get even. I never heard of anyone getting ahead on ’em.”
“Are you feeling all right?”
“Sure, sure. I’m just worried about my points, that’s all.”
“What’s this genie geometry all about?”
“You don’t know about brownie points? All my buddies keep score. In fact every married male should know about ’em. It’s a way of figuring where you stand with the little woman—favor or disfavor. Started way back in the days of the leprechauns, I suppose, long before there were any doghouses.
“You see, if you’re a good spouse, if you go straight home after work and never forget to mail letters (I remembered the chap in the elevator) and help with the housework and remember all anniversaries and tend the kids and never fuss about holes in your socks or the price of your wife’s hats . . ., then you’ve got brownie points!”
He paused and I made a fast mental calculation, figured how many years I’d been married, subtracted one year—the first—for exemplary behavior and deduced it would take me double the remaining years to catch up.
“But you can build a stockpile of brownie points, can’t you?” I asked hopefully. “Bring home flowers occasionally, cut the lawn twice a week, put the cap on the toothpaste tube and earn a free night out with the guys now and then?”
He looked at me with sorrowful eyes:
“Can’t be done. You never get ahead. At best you can stay even. You see, the theory is that you make points the hard way, slowly and with great effort, but you lose ’em, zing, like that.” He snapped his fingers.
“Doesn’t this deal work both ways?” I queried.
“Don’t even mention it,” he replied. “A suggestion like that would lose you so many points it would take six slide rules and a comptometer to calculate ’em!”
“If a leprechaun figured out brownie points,” I mused, “you can bet it was a girl leprechaun, some scheming sprite who wanted to tie up her guy’s conscience in addition and subtraction—mostly subtraction.”
He looked worriedly over his shoulder at the clock, then shrugged.
“I’ve lost so many points now I guess it won’t hurt to lose a few more.”
Then he added:
“You’re right about stockpiling, of course. A man should be able to build up a reserve. It would give him an incentive, something to work toward. But it would also take a certified public accountant to keep the ledger straight. Oh, well . . .”
I’ve seen him several times since, a dispirited look on his face—caught with his points down.
I feel sorry for him in a way, a man beset by elfin calculations in a numbers racket, a man who can never get ahead, only struggle to keep even. Nor is he unique. Collectors—or rather losers—of brownie points are widespread among America’s married male population. Even if they don’t call them brownie points they lose them just the same and just as fast.
I know—and I hate to admit it.
But after last night I’m pointless!

The illustration for Brownie Points—a New Measure of a Husband, by Marvin Miles, depicts a pixie showing a timepiece to a dispirited married man – from the Los Angeles Times of 15th March 1951: 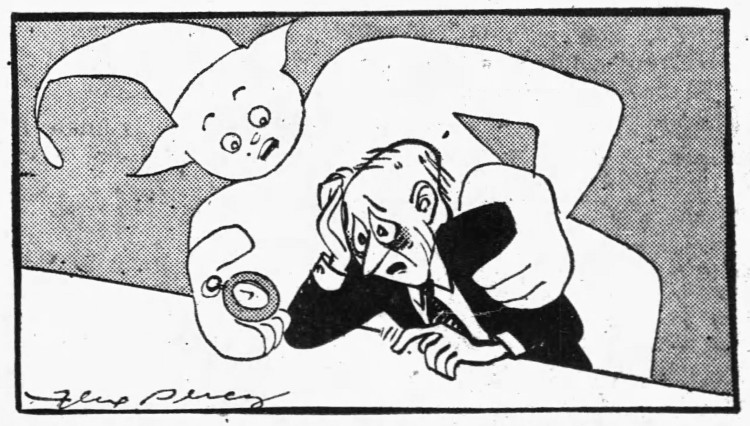