According to the Oxford English Dictionary (3rd edition, 2013), blue sky and hot air was originally used as an adjective meaning, of securities and other investments, sold under false pretences so as to increase the profits of the seller or dealer.

But, in fact, the phrase was originally used as a noun and in the broader sense of impractical scheme based on empty talk, the element blue sky meaning unrealistic project, and hot air meaning insubstantial claims; the earliest instance that I have found is from The Advocate-Democrat (Marysville, Kansas) of 23rd July 1903:

There seems to be ways of platting towns in Oklahoma and then there seems again to be different ways of platting towns in Oklahoma as is evidenced by the two methods of offering lots for sale here in Marysville. Some time ago parties were selling lots in a town located somewhere in Oklahoma, but could not tell you even where their town was, for their system was the veritable blue sky and hot air. This system does not seem to be universally used even by Oklahomans for Mr. Rick Messall of Enid, O. T., formerly of Marysville, is here this week offering lots in his new town of Komalty, Kiowa County, O. T. for sale and people here in Marysville, who have been there pronounce it a splendid townsite and one in their judgement that will make a fine town.

The second-earliest occurrence of the phrase that I have found is from an article about Daniel M. Lord, an advertising agent, published in The Inter Ocean (Chicago, Illinois) of 7th February 1904:

In his early days as an advertiser, and in fact until fifteen years ago, advertising was regarded by the advertisers themselves as being purely gambling. It was a case of hit or miss. […] It was simply a case of pay your money and await results. If the gamble paid it paid, and if it lost, the advertiser, as a rule, shut up his office and went out to look for honest work.
[…]
“One time in our career as advertisers we sold nothing but blue sky and hot air,” says Mr. Lord, “and it was hard to market. It’s different now.”

The phrase has been used in this broader sense until recently, for example in the following advertisement published in the Los Angeles Times (Los Angeles, California) on 1st May 1972:

We have positions available during our tremendous expansion program that will eventually encompass the entire state of Calif. We have 21 offices in So. Calif. now & want men to grow with us. Age no barrier. Must have car. We don’t give you blue skies or hot air…

A SOLID SECURE
$15,000 OPPORTUNITY
EVERY YEAR 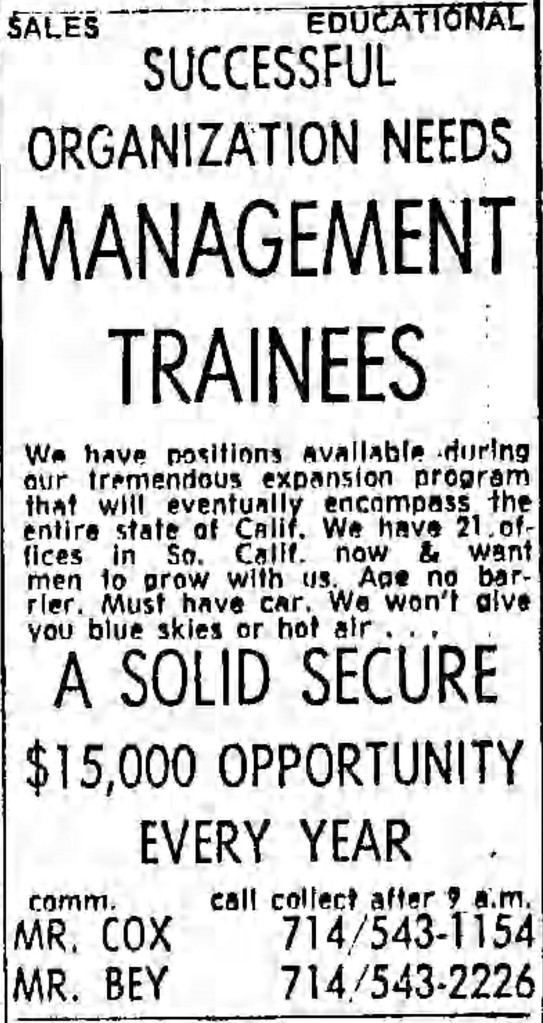