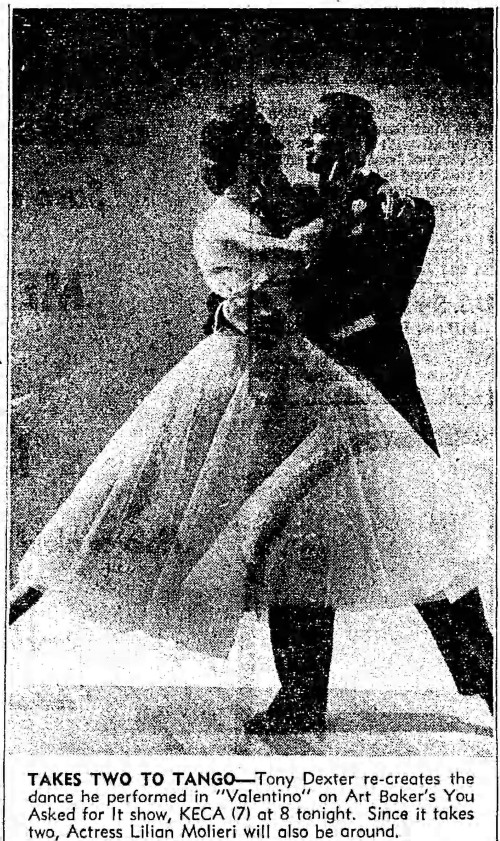 TAKES TWO TO TANGO—Tony Dexter re-creates the dance he performed in “Valentino” on Art Baker’s You Asked for It show, KECA (7) at 8 tonight. Since it takes two, Actress Lilian Molieri will also be around.

The phrase it takes two to tango means both parties involved in a situation or argument are equally responsible for it.

The earliest mentions of this song that I have found date from 5th September 1952; for instance, the following advertisement for Decca Records was published in the Nanaimo Free Press (Nanaimo, British Columbia, Canada) of that day: 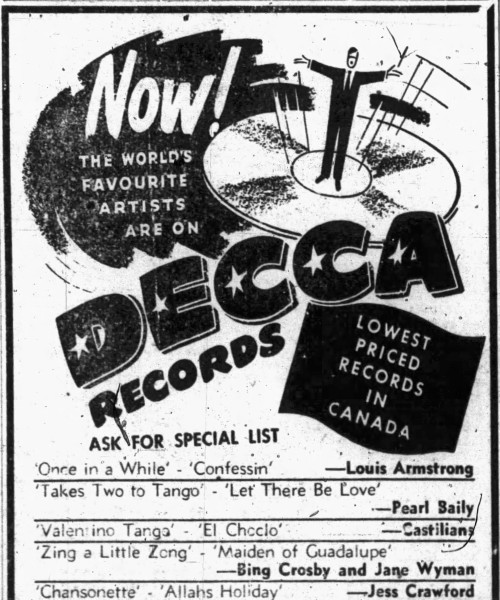 One of the earliest figurative uses of it takes two to tango that I have found is from an article titled Ez Charles Beats Bivins In ‘Tango’, about a boxing match between Jimmy Bivins (1919-2012) and Ezzard Charles (1921-75), published in the Tallahassee Democrat (Tallahassee, Florida) of 27th November 1952:

Boos frequently echoed through vast Chicago Stadium from the 2,799 fans who contributed to a gate of $7,371. At times, someone out there among the customers shouted: “Takes two to tango!”
Charles […] slugged Bivins with a right to the jaw at the outset of the first round. It was the only big thrill rationed out to a national TV audience during the dull 10-round bout.
The 33 year old [sic] Cleveland Negro went down to one knee in the corner. Charles hammered at him a couple of times while he was kneeling before being sent to the other side of the ring. Bivins blinked his eyes and took a mandatory eight count before arising to start a back-pedaling, defensive retreat that lasted throughout.
[…]
Charles was not too happy about it all.
“Bivins kept out of my reach,” he said. “He ran away. I need a guy who will fight back.”