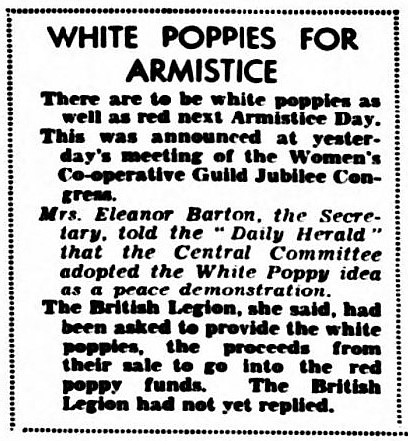 There are to be white poppies as well as red next Armistice Day.
This was announced at yesterday’s meeting of the Women’s Co-operative Guild Jubilee Congress.
Mrs. Eleanor Barton, the Secretary, told the “Daily Herald” that the Central Committee adopted the White Poppy idea as a peace demonstration.
The British Legion, she said, had been asked to provide the white poppies, the proceeds from their sale to go into the red poppy funds. The British Legion had not yet replied.

from the Daily Herald (London) of Thursday 22nd June 1933

In Britain, the white poppy is worn as an alternative to, or sometimes together with, the red poppy in the run-up to Remembrance Day in order to remember all the victims of war, to challenge militarism and to stand up for peace.

It was introduced in 1933 by the Women’s Co-operative Guild; the following is from the Birmingham Gazette (Birmingham, Warwickshire) of Thursday 22nd June:

RED-v.-WHITE POPPY CONTROVERSY LEADS TO WOMEN’S CONGRESS UPROAR
ARMISTICE DAY PLAN
“Many of You Will Not Dare to Wear the White”

INDICATING PACIFISTS
An appeal to members to wear white instead of red poppies on Armistice Day startled the jubilee congress, in London yesterday, of Women’s Co-operative Guilds.
Mrs. Beresford, of Linthorpe (Yorkshire), a member of the Central Committee, mentioned that an order for white poppies was being placed, and she hoped that when they were distributed among the branches there would be many who would wear them.
There were shouts of disapproval and general uproar occurred when several delegates tried to speak at once.
OFFICIAL’S CHALLENGE
Mrs. Eleanor Barton, general secretary, challenged the Congress. “When these white poppies are distributed,” she said, “I am sure there will be many of you who will not wear them because you are afraid to. It will need courage to wear white poppies when all your friends and neighbours are wearing red poppies.”
It was explained that the white poppies would indicate that the wearer was a pacifist. To avoid criticism that they were taking away work from ex-Service men the same people who made the red poppies were making the white ones.
“If you can walk in the streets wearing a white poppy when everybody else has a red one, I shall say you are a brave woman,” Mrs. Barton said later.
The Chairman of Standing Orders Committee refused to allow further discussion on the subject, as the resolution before the Congress—on peace—did not refer to white poppies.
Referring to the disturbance she remarked: “It’s good to have a little bit of excitement in between debates.”

The British Legion (an association of ex-servicemen, formed in 1921) refused both that the white poppies be made by its members and that the proceeds from their sale go to the Earl Haig Fund (a charity set up in 1921 by Douglas Haig to assist ex-servicemen), while claiming that the sale of the white poppies was a threat to this fund. This disingenuous attitude clearly appeared in The Lancashire Daily Post (Preston, Lancashire) of Wednesday 1st November 1933:

Members of the Burnley branch of the British Legion, who are now arranging about the distribution of red poppies for sale on Armistice Day, are perturbed because members of the Burnley Co-operative Women’s Guild on that day are likely to offer for sale white poppies as a peace emblem.
Mr. H. Latham, secretary of the local branch of the British Legion, said to-day that about 700 Burnley ex-Service men had been assisted during the past year from the Earl Haig Fund, and if white poppies were sold in the district, the fund for ex-Service men would probably suffer.
“This is one of the most ridiculous things I have ever heard of, and looks to me like ‘the thin end of the wedge’”, he added. “The proposed action of the Women’s Guild is looked upon as an attack upon the Earl Haig Fund, and an insult to the poppy which all Britons have come to revere.”
Mr. Latham said that several thousand more Flanders poppies would be on sale in the district this year than on last Armistice Day.
[…]
It is stated that the first that was heard of the white poppy was at the last National Congress of the Co-operative Women’s Guild. Then it was proposed to sell white poppies among members of the movement on Armistice Day as an emblem of peace, so that members, if they wished, could wear the red poppy in memory of those who fell in the war, and their own white poppy, the new style poppies to be made by the British Legion ex-Service men and the receipts to go to the Earl Haig Fund. However, the British Legion disapproved of the idea and declined either to make the white poppies, or accept money from the sale of them. Later the Women’s Guild at a central committee meeting last month, considered the matter, and it is now understood that the sale of white poppies among members of the Guild will proceed, and that profits will be sent to the Guild’s sick fund.

Sir,—November 11 (Armistice Day) is now looked upon as a national day in England’s history, and the production and sale of our red poppy, one of its chief features, is a national reminder quite pure in its inception and its objects—first, to commemorate the day of peace; secondly, through the agency of the sale of the red poppy, to make the lives of our heroes happier than they otherwise would be. This, I feel sure, your readers will endorse.
But there are persistent rumours circulating that we are also to have a white poppy on sale on the same day. This idea is born of the National Co-operative Women’s Guild, and the profits on the sale of the white poppy are to be devoted to the Guild’s convalescent fund.
I contend that apart from the white poppy’s object no municipality in the kingdom ought to allow any other than our own national red poppy to be even displayed, never mind sold, on this (to us) sacred day. Such an attempt on the part of an integral associate membership of the Co-operative movement will stink in the nostrils of every fair-minded man and woman in the kingdom.
The red poppy is not meant to perpetuate war, and the white poppy could only perpetuate cowardice and treachery. If this thing is persisted in I call upon every section of the members of the British Legion to use every effort in preventing any Co-operative candidate from holding any national or municipal office whatever.
By their deeds shall ye know them.—
Yours, etc.
J. J. Dale.
23, Carlton road,
Hillsborough.

Mrs. Barton said she considered the letter written by Mr. J. J. Dale to the “Daily Independent” to be unfair and inaccurate.
“I want to make it clear that we are not opposed to the British Legion, nor to the Flanders poppies, which the Legion sells on Armistice Day,” she said. “But for a long time our women have been feeling we ought to do something distinctive in order to show our desire for peace.
“For some years we have had a special drafted service for Armistice Week, and I wrote a little peace play which was widely used.
“This year, however, the members desired to go a little further, and it was decided by various branches that white poppies would be an excellent idea.
“We felt that convinced pacifists, who are strangers, will proclaim by the wearing of this emblem that they are in sympathy with each other.
“To show how little we are in opposition to the British Legion on the matter we offered to let them make the white poppies for us, but unfortunately the Legion could not agree to do this.
“I am perfectly certain that many of our members will wear both the white and the Flanders poppy.
“I should add that the making of these white poppies is not being done by the headquarters offices. That is being arranged by various branches, but my Executive Committee are definitely in favour of the idea, and we feel strongly that by the sale of these peace emblems we shall be helping a great cause.
“I would remind Mr. Dale and his friends that the members of my Guild are the wives, mothers or daughters of the men who fought at the front, and on Armistice Day we feel the pangs of sorrow as keenly as anyone else.”