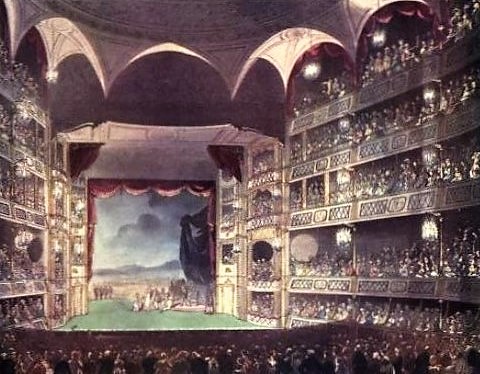 Drury Lane Theatre
from The Microcosm of London or London in miniature (London, 1904)

The phrase on the spur of the moment means without forethought or preparation—synonym: off the cuff.

The earliest occurrence that I have found is from Jackson’s Oxford Journal (Oxford, Oxfordshire) of 24th July 1784:

The Idea of Lord Ferrers, though probably set forward on the Spur of the Moment, looks at first as if it would lead to something worth attending—a Tax on Watches: Of the seven Millions of Inhabitants in the Island, at least two Millions may be computed to wear Watches—and of them two hundred thousand probably are Gold—undeniably this is fairly tangible as an Object of Revenue.—The only Difficulty, and that not a small one, would be the Mode of Collection.

The earliest instance of the variant on the spur of the occasion that I have found is from the Hampshire Chronicle (Winchester, Hampshire) of 19th May 1800:

Last night, just as his Majesty entered his box at Drury-lane Theatre, and was bowing to the audience with his usual condescension, a person who sat in the second row from the orchestra, but towards the middle of the pit, got upon the seat, and levelling a horse-pistol towards the King’s box, fired it. […] Providentially a gentleman who sat next him, Mr. Holroyd, of Scotland-yard, had the good fortune to raise the arm of the assassin, so as to direct the contents of the pistol towards the roof of the box.
[…]
After the farce, “God save the King,” was again repeated; and Mr. Sheridan*, who had accompanied the prisoner from the theatre, being by this time returned, sat down in haste, and, on the spur of the occasion, wrote the following verse, which was subjoined to that loyal air by Mr. Kelly, with most enthusiastic effect, viz.
“From ev’ry latent foe,
From the assassin’s blow,
God save the King!
O’er him thine arms extend,
For Britain’s sake defend
Our Father, Prince, and Friend,
God save the King!”

(* Richard Brinsley Butler Sheridan (1751-1816), Irish satirist, playwright and poet, was the owner of the playhouse at that time.)

These phrases are elaborated on the archaic on, or upon, the spur(s), meaning at full speed, in great haste, and referring to the use of spurs to urge a horse forward. The earlier phrase is first recorded in The thirde and fourthe boke of sir Iohn̄ Froissart of the cronycles of Englande, Fraunce, Spaygne, Portyngale, Scotlande, Bretayne, Flaunders, and other places adioynyng (1525), a translation by the English soldier, diplomat and translator John Bourchier (circa 1467-1533) of the Chroniques written by Jean Froissart (1337-circa 1404); Bourchier tells how “the gauntoyse fledde out of Dan by night”:

Whan Fraunces Atre­man parceyued that he had no socour / and that his artillary began to fayle / than he was som what disconforted in hymselfe / and sayd to them of his coūsayle. Sirs / […] let vs kepe vs all toguyder / and let vs go about the towne to vysite the watche / and lette vs cause the men and women of the towne to go in to the myn­ster / makynge theym to beleue that to morowe next we shall haue a great assaute / and bicause we would yt they shulde haue no domage / ther­fore we wyll haue them in suretie in the churche out of the waye. And we shall saye to the watchemen / that we wyll go out and make a scry­mysshe [= skirmish] with the hoost [= host, army]. And whan we be in the feldes / lette vs ryde on the spurres to Gaunte.

An early form, at the spur, was used several times in Merlin: or, the early history of King Arthur, a romance composed around 1450; for instance:

(edited by Henry Benjamin Wheatley (1838-1917) – published 1865-99)
The Duke saugh [= saw] his peple come fleinge and the saisnes [= Saracens] after, that hem pursued harde at the spore.
[…]
Whan sir Gawein and his companye were returned, the hoste enchased [= the army pursued] the saisnes so nygh euer at the spore.