cartoon published by Punch, or the London Charivari on 12th July 1916: 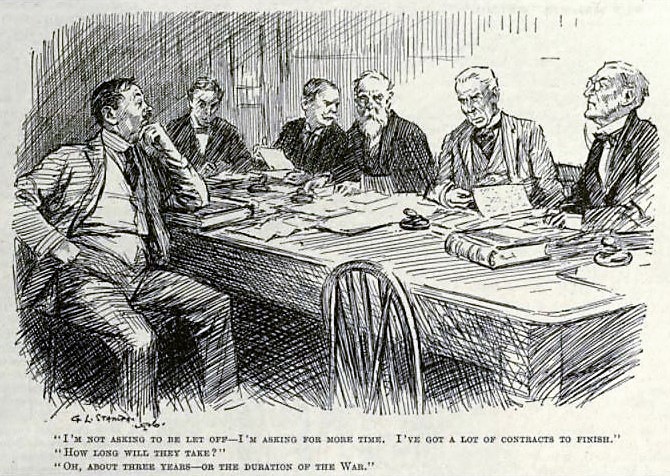 “I’m not asking to be let off—I’m asking for more time. I’ve got a lot of contracts to finish.”
“How long will they take?”
“Oh, about three years—or the duration of the War.”

Originally used of the First World War, it is from the term of enlistment for three, or four, years or for the duration of the war. The following definitions are from Soldier and Sailor Words and Phrases (London, 1925), by Edward Fraser and John Gibbons:

– Duration, the: The term of service for which the men of the “New Army¹” were recruited, as contrasted with the regulation period for Territorials².
– Duration, for the: A phrase often used colloquially to express weariness and impatience. It had all kinds of applications. Men, for instance, whose relief was long overdue might be heard complaining, “Are we going to stop here for the duration?” The expression had reference to the term of enlistment: “For four years or the duration of the War.”

¹ New Army: any of the British forces assembled from Kitchener’s volunteer recruitment campaign at the beginning of the First World War
² Territorial Army: a British volunteer force originally instituted in 1908 and organised on a territorial or local basis to provide a reserve of trained and disciplined manpower for use in an emergency

The earliest instance of the term of enlistment that I have found is from The Birmingham Daily Post (Birmingham, Warwickshire) of 12th August 1914:

MEN CAN NOW ENLIST IN THE COUNTY REGIMENT, OR ANY OTHER REGIMENT, FOR THREE YEARS, OR FOR DURATION OF WAR ONLY. AGES 19 TO 30.

OLD SOLDIERS MAY NOW ALSO ENLIST IN LINE FOR PERIOD OF WAR ONLY, UP TO 42 YEARS OF AGE, N.C.O’s RETAINING THEIR FORMER RANK.

The following is from the Evening Express (Aberdeen, Scotland) of 26th October 1914:

Practically 600 men have now been secured for the reserve unit of the 4th Battalion Gordon Highlanders (Territorials). Men may join this force for either foreign service or home defence, and for four years or for the duration of the war. Major Ogilvie, commanding the Foreign Service Battalion, now in England, is at present in the city, and is anxious to take back with him the number of men necessary to complete the establishment of his battalion.

According to the Yorkshire Evening Post (Leeds, Yorkshire) of 31st May 1917, the men who enlisted under those terms were derogatorily called duration men by those who had been soldiers since before the war:

The old soldier’s attitude towards the now soldier is hopelessly inconsistent; he feels that the new soldier ought to be in the army, but at the same time he resents his presence there; and in moments of irritation he expresses his resentment very vigorously. He will refer to his pre-war comrades as “soldiers” and to the post-war men as “this mob,” or “duration men,” or “rag-time soldiers,” and will sometimes speak bitterly of himself as “what you chaps call ‘a common soldier.’”

By 1917, for the duration had become a phrase, as shown by the title of this paragraph from The Diss Express and Norfolk & Suffolk Journal (Diss, Norfolk) of 13th July 1917:

Mr. Macpherson informs Mr. Nuttall in Parliamentary Answers that he is under a misapprehension in thinking that there were authorised voluntary enlistments for a maximum period of three years. The terms were three years or the duration the war.

An early post-war use of for the duration is from the title of this dialogue published in The Shields Daily News (Tynemouth) of 29th January 1920:

INTERNED FOR THE DURATION.

“There’s no use of your trying to square this thing up, your worship,” said the man in the dock.
“My wife and I fight just so often and just so long, and we can’t help it. So there you are.”
“And about how long do you keep it up?” asked the magistrate.
“About two weeks.”
“All right. I’ll give you fifteen days in gaol; in other words, you are interned for the duration of the war.”

The following from the Yorkshire Evening Post (Leeds, Yorkshire) of 11th April 1921 shows that for the duration connotes unpleasantness:

I travelled in a carriage containing several members of the Army and Royal Fleet Reserve on Saturday (says the London correspondent of “The Yorkshire Post”). Their conversation was all of the camps they were going to, and the pals they would see again. Not a word of a prospect of a general strike or the duties for which they might be needed. A civilian observed that they might be wanted for ninety hours or ninety days. “Say the duration, Guv’nor,” replied a little tough fellow, on his way to Shorncliffe, with the first touch of grimness I had noted.