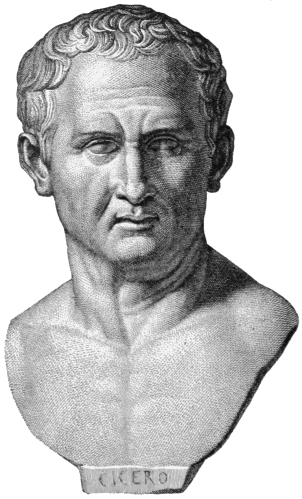 The noun cicerone denotes a person who conducts and informs sightseers.

It is a borrowing from the Italian masculine noun cicerone, plural ciceroni, from Latin Cicero/Ciceron-, the name of the Roman orator, author and statesman Marcus Tullius Cicero (106-43 BC), in allusion — it is said — to his eloquence and learning (the historical origin is unknown; English examples are earlier than any in Italian dictionaries).

The name cicerone was originally given, in the first half of the 18th century, to learned Italian antiquarians, whose services were sought by visitors seeking information about the antiquities of a place.

It was first used in English in Dialogues upon the Usefulness of Ancient Medals (circa 1719), by the English author and politician Joseph Addison (1672-1719); in the edition in which those dialogues first appeared (The works of the Right Honourable Joseph Addison, Esq – London, 1721), the plural form ciceroni is erroneously used:

I must own to you it surprized me to see my Ciceroni so well acquainted with the busts and statues of all the great people of antiquity. There was not an Emperor or Empress but he knew by sight, and as he was seldom without Medals in his pocket, he would often shew us the same face on an old Coin that we saw in the Statue. He would discover a Commodus through the disguise of the club and lion’s skin, and find out such a one to be Livia that was dressed up like a Ceres. Let a bust be never so disfigured, they have a thousand marks by which to decipher it. They will know a Zenobia by the sitting of her Diadem, and will distinguish the Faustina’s by their different way of tying up their hair. Oh! Sir, says Cynthio, they will go a great deal farther, they will give you the name and titles of a Statue that has lost his nose and ears; or if there is but half a beard remaining, will tell you at first sight who was the owner of it. Now I must confess to you, I used to fancy they imposed upon me an Emperor or Empress at pleasure, rather than appear ignorant.

In 1739, the French magistrate and scholar Charles de Brosses (1709-77) was the first user of the word in French, for example in a letter that he wrote from Rome to his friend Monsieur de Quintin: